In Sri Lanka, an underground wildlife racket has been simmering for a while. And a recent incident has brought it to a boil.

On the night of May 1st, a gang attempted to kidnap a wild elephant calf out of the Uduwalawe National Park in Sri Lanka. But tipped off by alert villagers, police and wildlife officers foiled the abduction. The gang fled, but not before allegedly assaulting a media personnel and taking away his video tape, which had documented the evening’s altercations. The calf was found the next day, a short distance from the National Park. But many other abducted elephant calves have not been so fortunate.

Environmentalists in Sri Lanka estimate that at least 50-60 elephant calves have been stolen from the wild since 2011. Conservationists say this appears to be a highly organized gangs catering to the very rich and powerful with links to some politicians, wildlife officials and religious institutions. 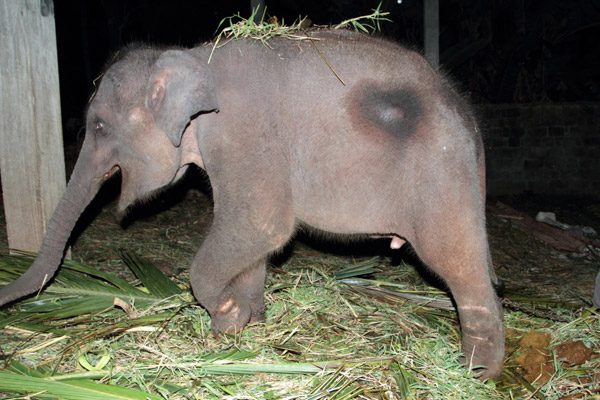 A year later, a registration book on all captive elephants in Sri Lanka, maintained by the Department of Wildlife Conservation, mysteriously went missing.

“A number of environmentalists became active and started looking into it, and found that there were many discrepancies between the permits issued, and the elephants that were held [in captivity],” Prithiviraj Fernando, scientist at the Centre for Conservation and Research in Sri Lanka, told mongabay.com

To exacerbate the dubious registration process of captive elephants, the Ministry of Wildlife Conservation in Sri Lanka declared a controversial amnesty. According to the amnesty, people illegally owning elephants could simply pay one million rupees (~$17,000) to legitimize their ownership.

“This amnesty, therefore, provides a ‘Carte Blanche’ for capturing elephants illegally, and then legalizing the process by paying Rupees one million,” said Srilal Miththapala, elephant and wildlife activist and past president of The Hotels Association of Sri Lanka. “I think this controversy has fueled the escalation of illegal juvenile elephant capturing over the past years.”

The modus operandi of the gangs seems highly specialized. Some speculate that these groups tranquilize the targeted elephant calves, and fire shots into the air to chase away rest of the herd. According to others, these groups simply kill the mother to capture the calf.

But while the current estimates of illegal calf captures are 50-60, the actual number of calves abducted from the wild may be much greater.

“Catching babies from the wild in secret, keeping them hidden away in the forest till they can be transported surreptitiously by some vehicle, and maintaining them in secrecy till they are tamed without any proper care or facilities probably causes much greater mortality in these calves,” said Fernando. “Therefore, the numbers actually taken from the wild may have been 2-3 times more than the number that survived.”

So what happens to these captured calves?

Selling and renting of elephants is a very lucrative business in Sri Lanka. The illegally captured calves get sold in underground markets, often fetching upwards of 10 million rupees ($170,000). And once sold, they are mostly rented out for religious festivals, pageants, and tourism for about $15,000-20,000 per month.

“Owning elephants in Sri Lanka is like owning a Mercedes or Ferrari,” said Vimukthi Weeratunga, a wildlife activist in Sri Lanka. “People associate keeping elephants with being very wealthy.”

Agitated by the incident on May 1st, Weeratunga, and several other environmentalists met recently to discuss the problem. The meeting focused on the lack of transparency within the Department of Wildlife Conservation, sorting out permits, registration of captive elephants, and confiscation of illegal elephants. 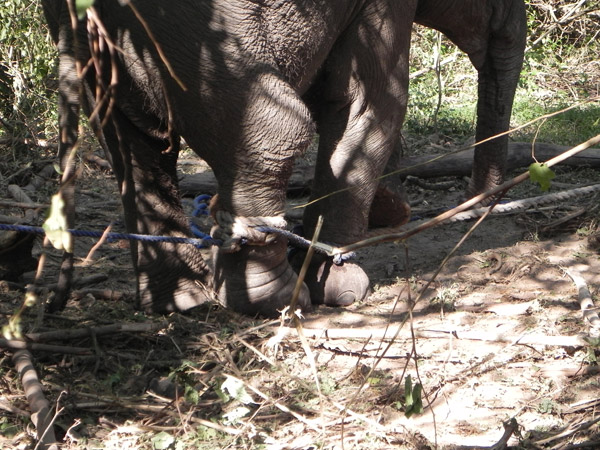 Baby elephant found near Galgamuwa about to be loaded onto the truck with all four legs tied. Due to vigilant nearby communities, this baby was released and joined the herd. Photo by: Vimukthi Weeratunga.

“When we first started looking into this problem, we never thought it would be so complicated,” said Weeratunga. “But soon we realized that we have to fight many different fronts, including politicians. The media has, however, been very supportive, and the matter is now in the Parliament.”

The Fauna and Flora Ordinance makes it illegal to kill an elephant in Sri Lanka. Illegally capturing a wild elephant also carries a hefty fine of $1,400-4,500 or two to five years of imprisonment or both. But “influential” people continue to protect those involved in the racket.

“It is frustrating situation, where there is adequate legal provision to take action against this problem, but there are large and more complex obstacles in the current context of the administrative structure. I believe, intensive public opinion and agitation can create changes,” said Miththapala.

Sri Lanka has always had a sizable captive elephant population, as well as the highest density of wild Asian elephants in Asia. With increasing habitat loss and fragmentation, humans and elephants are in a constant conflict due to crop-raiding and destruction of property resulting in both human and elephant deaths. The elephant calf abductions may only intensify this conflict.

“Currently, about 250 elephants die from human-elephant conflict (HEC) annually in Sri Lanka,” said Fernando. “Additionally unknown but significant numbers die from starvation inside protected areas after being driven there, and by electric fences in unsuccessful attempts at HEC mitigation. So if we add to this a large number of babies being removed, it becomes a major conservation issue.”