In the waters off the coast of northern Australia lives a species of feathery coral. Years ago, bits of it were collected by the Australian Institute of Marine Science and stored at the National Cancer Institute’s extract repository, along with 200,000 other samples. When researchers retrieved and tested it, they found that it was very effective at blocking HIV infection of host cells.

Their findings were presented by Koreen Ramessar of the National Cancer Institute at a conference on April 29, with a full report slated for release in the near future. Even though the results are preliminary, they raise hope that the coral extracts could be used to boost the efficacy of preventative treatments.

According to estimates by the World Health Organization, 35.3 million people were infected with HIV at the end of 2012, with approximately 2.3 million new cases that same year. If untreated, HIV will progress to its disease-form, AIDS, once the virus reduces a person’s immune system T-cells to below a certain threshold (200 cells per cubic millimeter). While antiviral treatments have advanced in the past decade, more than a million people still die from AIDS-related conditions every year. 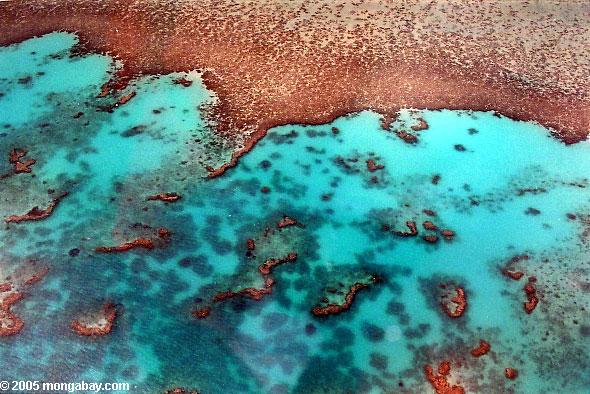 Coral is sensitive to human impacts. Studies estimate that 10 percent of the world reefs are already dead, and many more are threatened. Photo by Rhett Butler.

The researchers isolated a specific protein from the coral sample that stops an HIV virus from entering T-cells – a critical step in viral reproduction and, thus, progression of disease. This protein, called “cnidarin,” is unique to a type of soft coral, although scientists do not yet know what role it plays in coral biology. The researchers believe its anti-HIV ability is due to a characteristic that may be unique to cnidarin.

“We found that cnidarins bind to the virus and prevent it from fusing with the T-cell membrane,” said Ramessar. “This is completely different from what we’ve seen with other proteins, so we think the cnidarin proteins have a unique mechanism of action.”

There does exist the possibility that the virus would become resistant to cnidarin if it is used in preventative measures. However, because it uses a very different mechanism to fight infection than do other anti-HIV medications, it wouldn’t interfere with most current therapies.

“When developing new drugs, we’re always concerned about the possibility of undermining existing successful treatments by encouraging drug resistance in the virus,” said lead researcher Barry O’Keefe, deputy chief of the Molecular Targets Laboratory at the National Cancer Institute’s Center for Cancer Research. “But even if the virus became resistant to these proteins, it would likely still be sensitive to all of the therapeutic options that are currently available.”

While this is the first time coral has yielded medically useful compounds, those from other marine organisms are currently used to treat a variety of conditions. For instance, some algae species contain proteins that also inhibit viral attachment to host cells. Still, the possibility of side effects exist with any compound, so required testing will mean it will be quite some time before a coral-based drug will be commercially available.

“Every protein is different so the cnidarins will have to undergo rigorous immunological profiling prior to any clinical use,” O’Keefe told mongabay.com “That being said, another natural antiviral protein we have isolated, griffithsin, from the red algae Griffithsia sp. has shown a very limited tendency to provoke an unwanted immune response.

Not much is known about the species’ range or population. Because of this, the researchers are not releasing its specific name or location at this time.

“I do not want to encourage would-be collectors to go out collecting the coral and potentially causing damage to the ecosystem,” said O’Keefe. ”[The sample] was initially collected in only small quantities under supervision by the Australian Institute of Marine Science and I think that is best.”

The next step is to refine methods for generating cnidarin in larger quantities so the proteins can be tested further to identify potential side effects or activity against other viruses.

“Making more of it is a big key,” said O’Keefe. “You can’t strip the Earth of this coral trying to harvest this protein, so our focus now is on finding ways to produce more of it so we can proceed with preclinical testing.”

Many coral species are threatened around the world. Various studies estimate 10 percent of reefs are completely dead, while 60 percent are at risk due to damaging human activities such as coral mining and introduced disease. Most corals are also sensitive to pollution and are often damaged by runoff from coastline urban areas. Projections show that by 2030, more than 50 percent of the world’s coral reefs may be dead.

Australia is currently planning to extend a protected area along the country’s northeast coast, where the cnidarin-producing species exists. If it goes through, almost a million square kilometers (400,000 square miles) will be safeguarded against drilling and other damaging activities. The area would be the largest highly protected marine area of any country in the world.

While practical use of cnidarin may still be a long way off, the preliminary results from this study are very promising. They also underline the importance of preserving natural environments, not just for the sake their resident species but also for our own.

“It’s always thrilling when you find a brand-new protein that nobody else has ever seen before,” O’Keefe said. “And the fact that this protein appears to block HIV infection—and to do it in a completely new way—makes this truly exciting.”

(02/25/2014) Scientists have discovered a small island bay in the Pacific which could serve as a peephole into the future of the ocean. Palau’s Rock Island Bay harbors a naturally occurring anomaly – its water is acidified as much as scientists expect the entire ocean to be by 2100 as a result of rising carbon dioxide emissions.

(01/27/2014) Increasing forest protection in the right areas could increase benefits up to 10.4 percent to coral reef condition, according to a recent study of Fiji’s forests and reefs in Marine Policy. Benefits from protected forests such as improved water quality due to decreased runoff and increased distribution of the vegetation are more closely linked to coral reef health than previously thought.

Scientists discover a new coral in the French Polynesia

(12/20/2013) With humans scattered throughout the globe, it is hard to imagine lands still unexplored or species undocumented. Yet, on the remote French Polynesian Gambier Islands a new coral reef species has been found thriving in underwater lagoons. Echinophyllia tarae was discovered by marine biologist Francesca Benzoni and the research crew members of the Tara Oceans International Research Expedition.