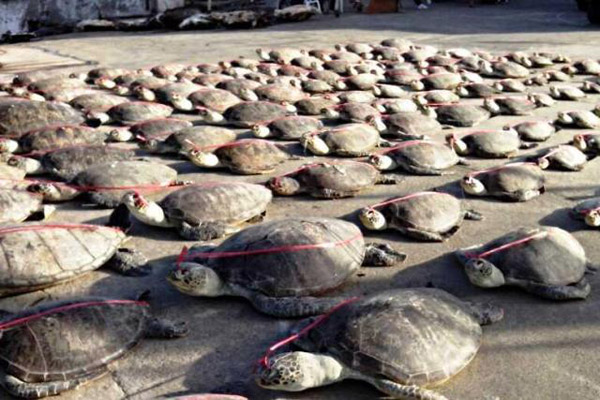 On Friday, eleven Chinese fishermen were caught by Filipino police with 555 marine turtles, 378 of which were dead. Officials in the Philippines have since released the 177 living turtles. But the incident has sparked an international standoff between the Philippines and China as the Chinese nationals were arrested in disputed waters in the South China Sea.

The Philippines has charged nine of the 11 poachers over the incident—two were released because they were minors. Those charged could face 12-20 years in prison for poaching a Critically Endangered species, in this case the Hawksbill turtle (Eretmochelys imbricata). But China has demanded the release of the remaining fishermen and the boat, which was confiscated.

The Chinese fishermen were apprehended about on the Banyue Reef, about 95 kilometers (60 miles) off the coast of Palawan, a Filipino island, and may face illegal entry charges as well as the area falls into the Philippines’ exclusive economic zone.

But China has sent a diplomat to Palawan to check on the fishermen and ask for their release. China has called the arrests “provocative.” 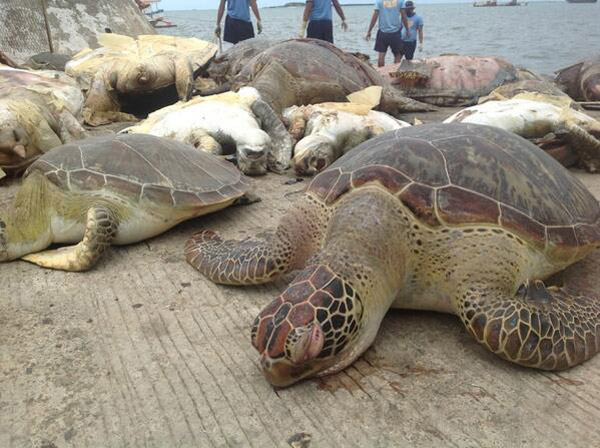 “What I can say is that it was a normal routine patrol. We are just following the law…The area was just [90 kilometers] away from Philippine soil. How can that be provocative?” he said. “It’s also in accordance with an international treaty on the protection of endangered species, of which both the Philippines and China are signatories.”

At least two marine turtle species were found on the boat, Hawksbill sea turtles and green sea turtles (Chelonia mydas), which is categorized as Endangered by the IUCN Red List. Of the surviving turtles, 11 were hawksbill and 91 green marine turtles.

For millennia, sea turtle meat and eggs were important part of many peoples’ diets around the world. However, overhunting, pollution, climate change, and killed as bycatch by industrial fisheries have pushed all of the world’s marine turtles toward extinction. Of the seven marine turtles, two are listed as Critically Endangered, two as Endangered, two as Vulnerable, and one as Data Deficient. All seven, however, are listed as Appendix I on the Convention on International Trade in Endangered Species of Wild Fauna and Flora (CITES), meaning that commercial trade is illegal for all marine turtles. 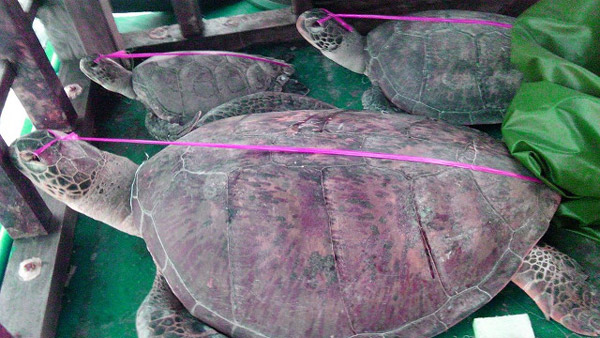 The hundreds of dead sea turtles have sparked an international incident. Photo by: PNP-SBU/PIA. 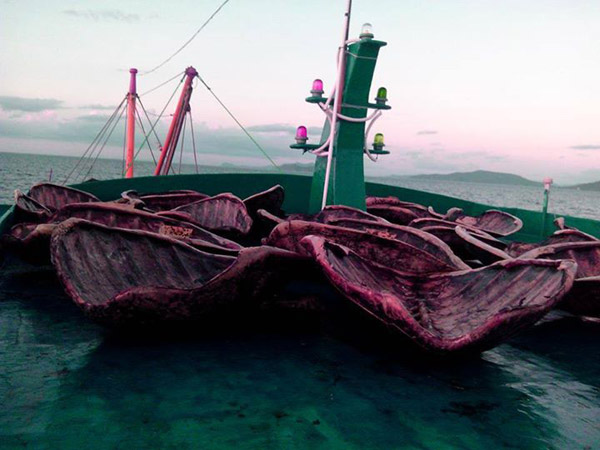 (04/09/2014) Aside from reducing the populations of the species sought for capture, commercial fisheries are also killing thousands of nontarget creatures such as sharks, albatross, and sea turtles, collectively referred to as “bycatch.” However, the full extent of the problem is only beginning to be grasped.

(03/14/2014) Kate Mansfield, at her lab in the University of Central Florida, is holding a baby loggerhead turtle, smaller than her palm, painting manicure acrylic on its shell. When the base coat dries out, she glues on top a neoprene patch from an old wetsuit with hair extensions adhesive. Finally, she attaches a satellite tracker on top, the size of a two “party cheese” cubes, with flexible aquarium silicone, powered by a tiny solar battery. Now the little turtle is ready to be released back into the ocean.

(11/26/2013) The leatherback sea turtle—the world’s largest turtle and the only member of the genus Dermochelys—received good news today. In an update of the IUCN Red List, the leatherback sea turtle (Dermochelys coriacea) has been moved from Critically Endangered to Vulnerable. However, conservationists warn that the species still remains hugely endangered—and in rapid decline—in many parts of its range.

(11/14/2013) Hundreds of kilometers of commercial fishing lines slither along coastal waters in Costa Rica, hooking thousands of mahi-mahi and many other marketable fish. But when scientists scrutinized fishermen’s catch, they were shocked by the staggering number of sea turtles accidentally snagged on the lines.

(11/11/2013) Bycatch, a side-effect of commercial fishing in which non-target species are accidentally caught, is linked to severe population declines in several species. Sea turtles are particularly impacted by small-scale coastal gillnetting practices, in which large nets are deployed and indiscriminately snag anything of a certain size that attempts to swim through them. However, that may soon change.

(10/15/2013) On an isolated beach in Bird’s Head Peninsula, Indonesia, a female leatherback turtle shuffles out of the ocean and onto the shore, ready to lay her eggs. Under the cover of night she excavates a hole in the sand, depositing anywhere from 80 to 100 eggs inside. Using her flippers she flicks sand over the eggs, hiding them from potential predators. Then, shuffling away, she returns to the turquoise waters ready to make an 8,500-mile journey across the Pacific Ocean to the California coast.

(06/13/2013) Conservation organizations and individuals have raised $56,000 for information leading to the arrest and conviction of turtle egg poachers who murdered Jairo Mora Sandoval, a 26-year-old sea turtle conservationist earlier this month.