Intricately carved, meticulously designed, and costing hundreds of thousands of dollars: this is “hongmu,” or Chinese luxury furniture reflecting the elite styles of the Ming and Qing dynasties. But while the red-colored furniture may be aesthetically beautiful, it comes with a blood price. The hongmu craze—which is booming among China’s newly wealthy—is linked to murder, drugs, and the near extinction of a number of species, including Siamese rosewood (Dalbergia cochinchinensis), in a new report by the Environmental Investigative Agency (EIA).

Siamese rosewood is not found in China, but the nearby Mekong region, including Cambodia, Lao, Thailand, and Vietnam. While currently listed as Vulnerable by the IUCN Red List, the listing hasn’t been updated for 16 years. During that time the tree has been stripped to near extinction across the region for hongmu furniture, according to the report. 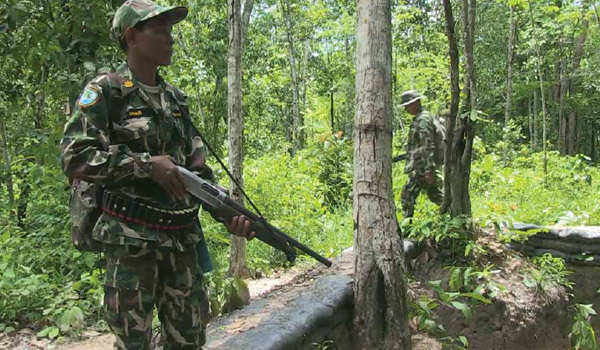 Forest rangers in Thailand protecting rosewood. Several Thai rangers have died in the line of duty during firefights with illegal loggers. Photo by: EIA.

“Siamese rosewood has become so rare and valuable that the practice of logging it is now more akin to wildlife poaching,” reads the report. “The majority of the timber that finds its way to the markets of China is sought by teams of skilled men from rural villages who will spend weeks at a time in remote forests tracking down the last stands.”

This underground trade has led to murder and explosions of violence, especially on the border of Thailand and Cambodia. Here, Cambodian nationals sneak across the border to extract Siam rosewood, frequently leading to firefights with rangers tasked in protected the vanishing species.

“The tools of the trade are chainsaws, guns and even rocket-propelled grenade launchers…” reads the report. “Since 2009, dozens of forest rangers have been killed on Thailand’s rosewood frontline. Fatalities among loggers are even higher, with 45 Cambodians reportedly shot dead by Thai forces in 2012 alone.”

Illegal loggers are often paid in a methamphetamine known as yaba, which was originally designed for horses.

But Simaese rosewood isn’t the only species used in hongmu furniture, though it remains among the most highly-sought. Hongmu identifies 33 official species, 21 of which are found in Asia, seven from the Americas, and five in Africa.

“Many of the populations of these species are being methodically exhausted in order of meet demand from China’s wealthy elite…Surging demand in China, especially since 2009, has progressively led to Hongmu species being stripped from the Mekong region, India, Madagascar, Central America and Africa,” notes the report.

Given the scarcity, traders are increasingly switching to alternatives to Siam rosewood, including Burmese rosewood (Dalbergia bariensis), which is listed as Endangered by the IUCN Red List but also has not been updated since the late 1990s.

The EIA says China must enact laws that make it a crime to import illegally logged timber from abroad. Such laws have recently been enacted in the U.S., the EU, and Australia, helping to curb illegally logged wood from these countries.

China should also “reform the Hongmu industry to ensure it stops stimulating demand for endangered species, and trading in illicit timber,” says the report.

The EIA also notes that government auctions of seized Siamese rosewood must be halted in Cambodia, Vietnam, and Laos, as such auctions only fuel demand. 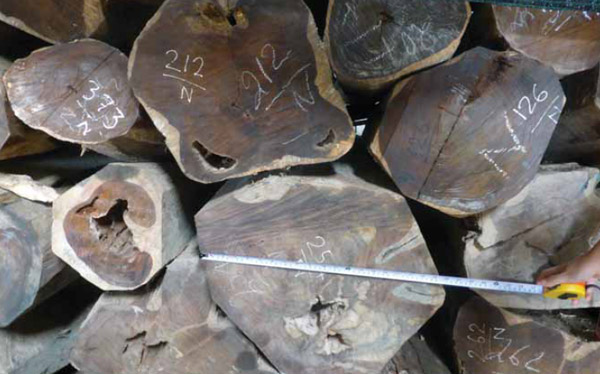 Routes of Extinction from EIA on Vimeo.

(05/06/2014) Although the Republic of the Congo has opened up nearly 90 percent of its lowland forests to logging, the majority of the logging occurring in the country is still illegal, according to a new report from the Chatham House. In fact the UK policy institute finds that illegal logging in the Republic of the Congo may make up as much as 70-75 percent of the industry.

(04/29/2014) A new report from activist group, ForestEthics, alleges that U.S. company, 3M, supplies many of its products from endangered forests around the world. The NGO links 3M’s masking tape and sandpaper to caribou habitat in the boreal forests of Canada, Scotch-Brite sponges to a controversial paper mill in Brazil, and those ubiquitous Post-it Notes to allegedly poor logging practices in the U.S.

(04/17/2014) Nearly 70 percent of officially inspected logging concessions in Peru have had their permits canceled or are under investigation for major breaches of forestry laws, finds a new study published in the journal Scientific Reports. Worryingly, the research also concludes that forestry permits are being widely used to launder timber illegally logged from outside concession areas.

(04/08/2014) The forestry sector in the Democratic Republic of Congo (DRC) is completely out of control, according to a new eye-opening report. Put together by the Chatham House, the report estimates that at least 87 percent of logging in the DRC was illegal in 2011, making the DRC possibly the most high-risk country in the world for purchasing legal wood products.

(04/07/2014) Flaws in the country’s system to verify legal wood products could have implications for trade with Europe, as new research suggests even certified companies in Indonesia may not be meeting EU standards. Indonesian civil society groups have called on their government to reform its legal timber certification system, pointing to widespread illegal practices among certified companies and an auditing system that is ‘almost impossible’ for companies to fail.

(03/19/2014) A new short film, entitled La Trocha, highlights the plight of the Wounaan people in Panama, who are fighting for legal rights to their forests even as loggers and ranchers carve it up. The conflict turned violent in 2012 when local chief, Aquilo Puchicama, was shot dead by loggers.