The Chinese Premier, Li Keqiang, has pledged $10 million [see note below] to combat poaching in Africa during a visit to the African Union headquarters in Addis Ababa. The fund is a part of a much larger loan package for the continent from China, totaling $10 billion in credit and $2 billion in aid.

The wildlife-rich continent is in the midst of a poaching crisis. Experts estimate that 22,000-35,000 elephants are killed every year by poachers, while last year over 1,000 rhinos were slaughtered in South Africa alone for their horns. Much of the ivory and rhino horn is destined for China or other countries in East Asia. While receiving less media attention, booming bushmeat markets are also taking their toll on Africa’s great apes, monkeys, small mammals, and birds.

Over the last couple decades, China has rapidly increased its presence in Africa through various industrial and development projects, including large-scale fossil fuel projects. Yet, this has also opened up China to criticism that it was consuming Africa’s natural resources for its own ends and negatively impacting the continent’s environment.

“We have a dream that all African capitals are connected with high-speed rail, so as to boost pan-African communication and development,” he noted. “China is ready to work with Africa ‘to make this dream come true.'” 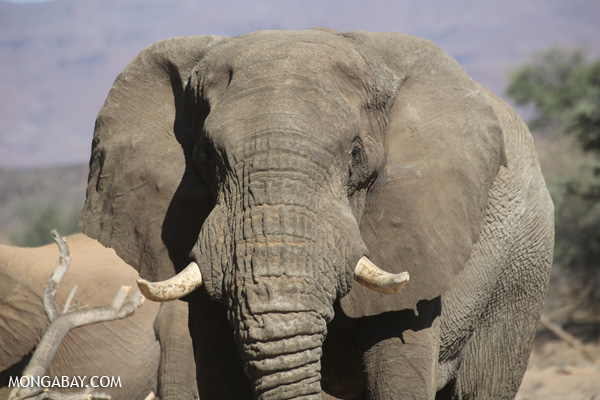 African elephant in Namibia. Photo by: Rhett A. Butler.

(04/30/2014) The 96 Elephants campaign has asked the television program, Antiques Roadshow, to stop airing appraisals of ivory, even if it is antique. To help convince the PBS program, the campaign produced a satiric video capturing not the worth of ivory, but its cost.

(04/17/2014) The head of an informal militia and poaching group, Paul Sadala a.k.a. ‘Morgan,’ was killed on Monday after surrendering himself to the army in the Democratic Republic of the Congo (DRC). A well-known elephant poacher and terrorist, Morgan became most famous for leading an attack on the Okapi Wildlife Reserve station in 2012.