Once almost extinct in parts of Europe in the late 17th century, the roe deer (Capreolus capreolus) eventually bounced back, and how: today, it is one of the most widespread deer in Europe, perhaps more familiar to us as Bambi, a European roe deer in the original book. But will its luck dry out in the future? A new study published in PLoSBiology suggests that while roe deer populations are still increasing, it may not be adapting to climate change.

In Champagne in eastern France, hotter temperatures over the past few decades have resulted in earlier springs. But the timing of roe deer births—closely linked to the flush of spring vegetation—has remained unchanged, according to a team of scientists from France and UK who dug through a 27-year long dataset on roe-deer population and births in Trois Fontaines.

Over this period, temperatures in this region rose more than the global average. In response to these warmer and early springs, while vineyards in the region have been flowering earlier, roe deer seem unable to respond to environmental cues. 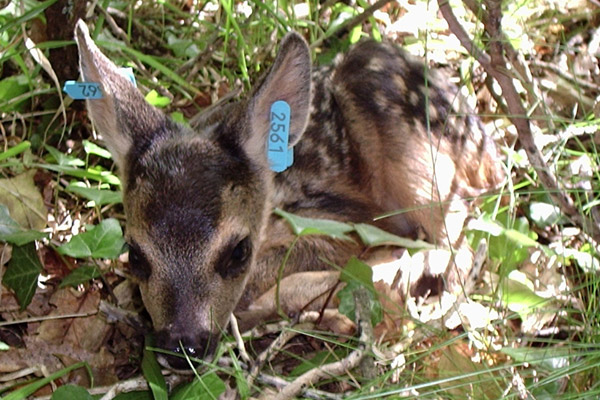 New fawn roe deer that has been ear tagged by scientists. Photo by: Maryline Pellerin.

“There is currently a huge interest in analyzing responses of organisms to ongoing climate change,” said Jean-Michel Gaillard, a biologist at University Claude Bernard Lyon 1 in France. “In several cases, species have been shown to adjust to some extent. So taking advantage of an especially detailed long-term monitoring of a roe deer population (performed by the Office National de la Chasse et de la Faune Sauvage (ONCFS)), we looked for any response of roe deer [to climate change].”

Between 1985 and 2011, researchers from ONCFS marked, ear-tagged and weighed about a thousand newborn fawns. The survival of these marked deer was then monitored during winter each year. In addition to this data, Gaillard and his team also collected local daily temperatures from a nearby weather station for each year, and the annual mean flowering dates of the vineyards in the Champagne region. They used the latter as a proxy for the early arrival of spring.

Since both predation and hunting of roe deer in the region is limited, the scientists hypothesized that fawn deaths would most likely be due to a reduction in high-quality food.

“Very hot days in June (hyperthermia), heavy rain (hypothermia), and in very rare case predation by wild cats and red fox have been reported to lead to fawn death,” said Gaillard. “However, by far, the most common mortality cause of newborn fawns is starvation.”
Tracking both the flowering dates of the vineyards and fawn birth timings over the study period, the scientists estimated the mismatch between the two. Their analysis confirmed that every year spring temperatures have been rising by 0.07 degrees Celsius, and flowering dates of vineyards have advanced by 0.6 days. The team thus expected that female roe deer would adapt to the early availability of high quality spring vegetation by giving birth sooner.

But the roe deer showed no such response.

In fact, by the end of the study, the mismatch between fawn birth dates and vineyard flowering dates increased. This meant that fawns were born increasingly late with respect to the timing of high-quality food availability. Additionally, roe deer fawns showed higher early mortality. So while the roe deer population was increasing over time, it was doing so at a continuously decreasing rate.

Unlike the roe deer, female red deer in Scotland advanced the dates of fawn births in response to local climate warming.

Daniel H. Nussey, an evolutionary ecologist at the University of Edinburgh, who headed the study on the red deer, said, “There’s a lot of evidence now that birds and mammals are altering their phenology across Europe as springs warm. Cases like this [of the roe deer] where there’s no apparent response, are obviously worrying.” 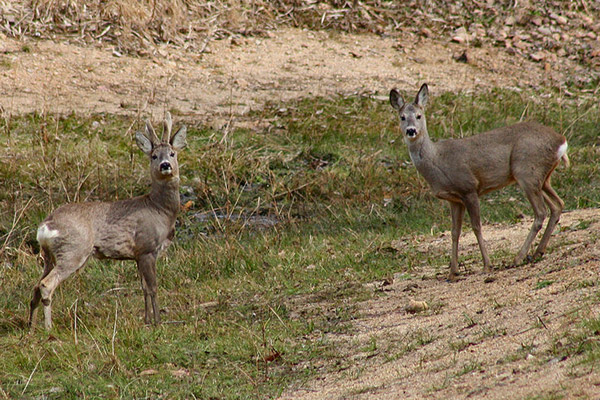 Male roe deer on the left, female on the right. Photo by: Creative Commons 3.0.

“The authors of this paper have coupled that observation with evidence that there’s a negative consequence for individual fitness, which is quite rare I think, and really does suggest some cause for concern, especially in such a cosmopolitan and generally successful species as roe deer,” he added. Nussey was not a part of this study.

So why have female roe deer been unable to adjust fawn birth dates to adapt to warmer temperatures?

The authors suggest this could be due to the roe deer’s peculiar reproductive cycle. They write that the various stages in their reproduction, like ovulation and conception dates, seem to be controlled by the length of day or photoperiod instead of temperature change or prime food availability. The roe deer, however, might be able to adapt to climate change in other ways.

“Roe deer do not resist (they showed increased fawn mortality) nor adjust (birth timing remains the same). However, they could move,” said Gaillard. “Indeed, we studied a population in forest exclusively. Roe deer are colonizing open areas since the 1980s and such environments might allow roe deer to escape climate change.”

Currently, there are several million roe deer across Europe, and the species is classified as Least Concern by the IUCN Red List. Their hardiness has enabled them to colonize and survive in a vast variety of habitats. Moreover, the absence of large predators has caused their numbers to soar. It is thus no wonder that roe deer are important game animals. In fact if you search for ‘roe deer’ on YouTube, you will be greeted by numerous videos of “how to hunt” and “how to skin” the animal.

But while the roe deer may have successfully come back from the brink of extinction, will climate change prove to be the test of its resilience? We’ll have to wait and watch. 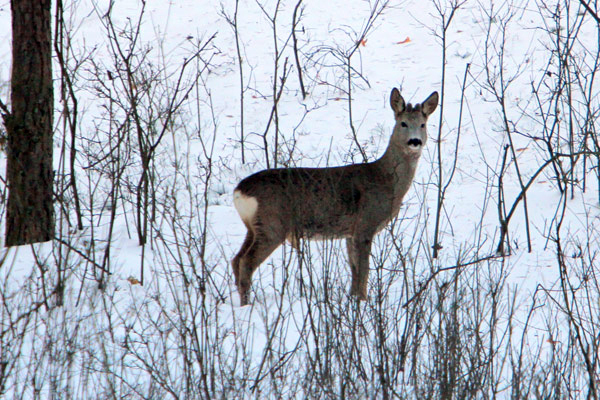 Roe deer in winter in Poland. Photo by: Jeremy Hance.

(03/13/2014) Human-caused climate change is altering the habitat of Adélie penguins (Pygoscelis adeliae). In an article recently published in PLOS ONE, a team of researchers led by Amélie Lescroël from the Centre d’Ecologie Fonctionnelle et Evolutive (CNRS) in France, found that changes in sea-ice content and newly formed icebergs significantly impacted Adélie penguin communities in the Ross Sea.