DNA testing has confirmed that an animal shot in February in Iowa’s Buchanan County was in fact a wolf, according to the Iowa Department of Natural Resources. This is the first confirmed gray wolf (Canis lupus) in the U.S. state since 1925.

Experts believe the wolf likely traveled south from Wisconsin or Minnesota, the latter of which has the largest wolf population in the lower 48.

The Iowa wolf, which was a 65-70 pound healthy female, was shot and killed in February of this year by a hunter who mistook it for a coyote. Although wolves remain a protected species in Iowa, the hunter was not cited, because he believed the animal to be a coyote and has cooperated with authorities, including bringing the wolf to them in the first place.

“I was surprised but not that surprised,” DNA specialist Vince Evelsizer told the Gazette. “Large animals can cover great distances, and state lines mean nothing to them.” 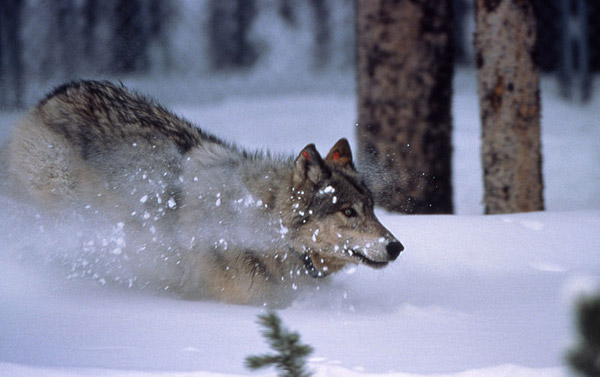 After being nearly exterminated across the continental U.S., gray wolves have returned to many states in the last two decades, both due to reintroductions and populations migrating from Canada. Gray wolves have been confirmed as far west as California and Oregon and as far east as Michigan. During the same time wolves have been vindicated by science as key ecological species. As top predators, wolves not only manage prey populations of animals such as deer and elk, but also change their behavior, curbing unhindered grazing. For example, the wolf’s return to Yellowstone National park led to a resurgence in young forest and a subsequent explosion in biodiversity.

But in many states wolves are now actively hunted and trapped. A legislative rider stripped the wolves of protection from the Endangered Species Act in 2011, the only animal to ever lose its protection in this way.

(01/28/2014) Hunters and trappers have killed 2,567 gray wolves in the U.S.’s lower 48 states since 2011, according to recent data. Gray wolves (Canis lupus) were protected by the Endangered Species Act (ESA) for nearly 40 years before being stripped of their protection status by a legislative rider in 2011. Last year total wolf populations were estimated at over 6,000 in the region.

(11/13/2013) Wolves and grizzlies aren’t best buddies. Burly bears can barge in on a feasting pack, making off with the wolves’ fresh kill. Wolves have been known to dig into bear dens and snag a cub. But after gray wolves returned to Yellowstone National Park in 1995, grizzly bears ate more berries in the summer for a pre-hibernation nutritional boost, researchers reported Sept. 4 in the Journal of Animal Ecology