Species monitoring can be a very invasive form of research. For instance, bird-banding – in which identification bands are placed around birds’ legs to track their movements – usually requires first catching them in nets. However, the use of non-invasive techniques made possible through advancements in technology has been on the rise. A new study published in Ecological Informatics examined one such technique: an innovative and inexpensive non-invasive monitoring tool, known as acoustic surveying.

The study tested the effectiveness of acoustic surveying as a species monitoring approach by assessing the possible impacts on bats by future construction activities at the University of Southern Denmark. Although the method was tested on bats, it can also be applied for the study of birds and insects. The researchers found it was very useful for species monitoring, providing significant insights into bat behavior and species distribution, while minimally impacting their lives. 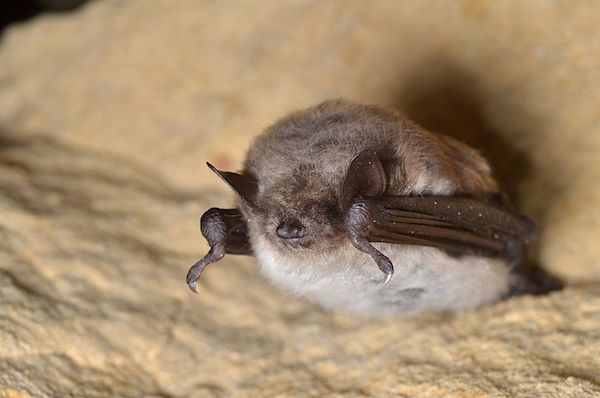 By using acoustic surveying, the researchers were able to identify two species of bats that hadn’t before been observed near the survey site in southern Denmark, such as this pond bat (Myotis dasycneme). Photo by Gilles San Martin.

The scientists recorded the bats’ calls over an extended period of time, and examined them in respect to seasonal variation, sunset and sunrise times, moon brightness, and weather conditions, all of which affect bat behavior. Scientists regard bats as “bioindicators” of high biodiversity. By gaining a better understanding of bat behavior, researchers can further understand how well an ecosystem is faring.

“Bats require a high quality habitat — i.e., an area with diverse vegetation, water and roosting possibilities,” Dr. Annemarie Surlykke, co-author of the study, told mongabay.com “That is not only important for bats, but for animal diversity in general, and therefore many bats would imply possibility for many animals (birds, amphibians, insects) in that particular area.”

The study broke down the recorded noises into separate “events,” in which some were categorized as “bat events” — or noises the researchers believed to be true bat calls– and “non-bat events.” Its findings showed sunrise and sunsets were associated with lots of bat activity, and that there was significant variation within day-to-day calls, which the researchers attributed to precipitation. They analyzed events before, after, and during rainfall and found some surprising patterns. Previously, scientists thought bats were not very active during rainfall, but Surlykke and her team discovered that bat events did happen throughout a period of rain. However, due to the noise from rain, the researchers had a harder time determining whether or not noises were actually bat calls. Another finding from the study that contradicted previous research was that a larger than expected proportion of recorded calls were social in nature rather than for echolocation.

The researchers were also surprised to hear bat calls from two species that were not known to inhabit the area: Nathusius’ pipistrelles (Pipistrellus nathusii) and pond bats (Myotis dasycneme).

The study estimates that 30 percent of candidate bat call events will turn out to be non-bat events upon further analysis. Future advances in technology and incorporation of long-term monitoring techniques will help improve the performance of acoustic surveying, such as reducing the number of false positives. The authors suggest several specific alterations to the approach for future research, including marking the start and end of an event and incorporation of weather data (e.g., humidity, temperature, illumination level, etc.).

According to Surlykke, despite the availability of recording devices, using them to collect acoustic data and analyze behavior in a noninvasive way is new. This study is at the forefront of non-invasive research, and demonstrates that acoustic surveying can be an effective way to conduct species monitoring. Future expansions on this approach may not only allow it to provide information on reproductive strategies and foraging behavior, but may also further our understanding of human impacts on the environment.