Dutch police arrested 31 Greenpeace activists today, who were attempting to block the Russian oil tanker, Mikhail Ulyanov, from delivering the first shipment of offshore Arctic oil to the European market. Greenpeace opposes drilling in the Arctic due to the difficulty of cleaning up any oil spill in remote, ice-filled waters, and the exacerbation of global climate change from exploiting new fossil fuel sources.

Among those arrested was the captain of the Greenpeace flagship, the Rainbow Warrior, who last year spent months in a Russian prison along with 27 other activists and two journalists for protesting the country’s Arctic oil drilling scheme. Seven other activists from the so-called “Arctic 30” also took part in today’s action.

At the Rotterdam Port, activists painted “No Arctic Oil” on the Russian oil tanker’s side, while others in inflatable boats blocked the tanker from initially offloading the oil.

The oil comes from the Prirazlomanaya platform in the Pechora sea off the northern coast of Siberia. The platform is run by Russia’s state-owned company, Gazprom, and is the first in the world to drill into the Arctic sea bed for oil. 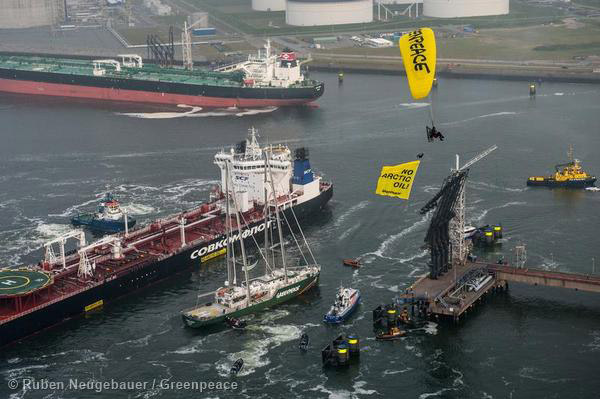 The captain piloting the Mikhail Ulyanov, Stanislav Chichin, told Associated Press that Greenpeace had put the ship’s safety in jeopardy.

“Maneuvering in the confined waters of a port is no less dangerous than sailing in the Arctic, especially when another vessel is trying to interfere with a tanker transporting 67,000 tonnes of crude oil in an area of high intensity shipping,” Chichin said.

Dutch police eventually arrested the activists involved in the blockade as well as Greenpeace Captain Peter Willcox. The oil tanker is now docked at Rotterdam and unloading its oil.

“The oil industry and governments are sparing no expense and going to the most difficult, most out of the way places on the planet just to prop up yesterday’s energy source,” Greenpeace writes in a blog. “Breaking this chain is not just an environmental imperative, it is a matter of peace and security. The fight to stop Arctic oil drilling is one of the defining battles of our time.”

According to the Intergovernmental Panel on Climate Change (IPCC) society can only burn 800-880 gigatonnes of CO2 if governments are to keep their pledge of making sure global temperatures don’t rise more than 2 degrees Celsius. Sixty percent of this “carbon budget” has already been burned by 2011, or 530 gigatons. This means many of the known sources of fossil fuels must be left unexploited.

(03/13/2014) Yesterday, the European Parliament passed a resolution supporting the creation of an Arctic Sanctuary covering the vast high Arctic around the North Pole, giving official status to an idea that has been pushed by activists for years. Still, the sanctuary has a long road to go before becoming a reality: as Arctic sea ice rapidly declines due to climate change, there has been rising interest from governments and industries to exploit the once inaccessible wilderness for fish and fossil fuels.