A long snout with teeth jutting from the sides? Check. Catfish-like barbels dangling from its chin? Got them. Gills on the side of its body? It has those, too.

These are characteristics of a bizarre group of sharks known as sawsharks (family Pristiophoriforidae). And until recently, only seven species were recognized. However, following examination of specimens caught in the western North Pacific, researchers discovered that the number of species should be raised one more.

Currently, the new species (Pristiophorus lanae), which was described from six females and one male, is only known to inhabit waters near the Philippine Islands. The authors of the study, published in Zootaxa, write that these sawshark specimens have several distinctive morphological features that separate them from other known species. 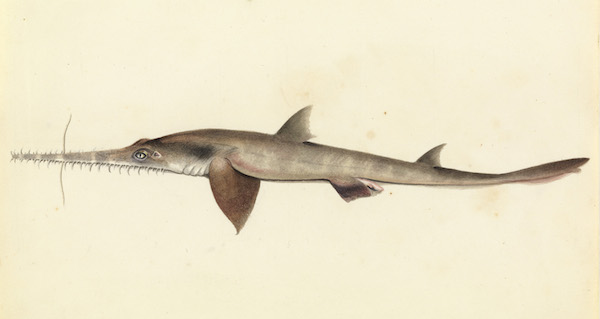 Sawsharks may use their jagged snout to stun prey, detect electrical signals, and for defense.

To distinguish the new sawshark from the seven other sawshark species, researchers examined aspects such as the length, width and color of the rostrum (the saw-like snout), size of the rostral teeth, barbel length, mouth position, total body length and vertebrae number. For instance, one attribute that makes the new species different from its closest geographical counterpart is that it has a longer and narrower snout.

Most sawshark species inhabit the Indo-West Pacific, but two occupy the western Indian Ocean and western North Atlantic. As with the other kinds of sawsharks, almost nothing is known about the biology of the new species.

“The interspecific relationship of the genus Pristiophorus has been little studied and remains open to interpretation,” write the authors in their journal article.

Additionally, sawsharks tend to be found in deeper water, which often complicates research. The new species is found at depths ranging from about 750 to 1945 feet (229 to 593 meters).

“It may be caught and discarded as bycatch by trawlers and other deepwater fisheries operations off the Philippines,” write the authors.

Sawsharks are different from superficially-similar sawfish (family Pristidae), which occur in shallower inshore freshwater and tropical marine areas around the world, reaching maximum depths of only 400 feet. Unlike sawsharks, sawfish lack barbels, have gills on their underside, do not lose and replace their teeth and can be up to four and a half times larger than sawsharks—sawfish species reach maximum length near 23 feet (seven meters), while sawsharks top out at about five feet (1.5 meters).

Both sawsharks and sawfish are believed to use their iconic snouts for hunting. Not only does the long snout help the animals sense electrical signals from prey in murky water or under substrate, but its embedded teeth also allow the animal to strike and stun fast-moving prey.

While little is known about the behavior of sawsharks, inferences may be drawn from observations of sawfish, which scientists believe use their similar snouts in self-defense. They have also been reported to use their “saws” to cut pieces from larger prey. Other anecdotes include stories from Indian fishermen who purportedly observed sawfish attack and kill foraging dugongs, and an account in a paper from 1938 purporting a man was fatally wounded by a sawfish encounter. However, in general, sawfish and sawsharks are not regarded as dangerous to humans. 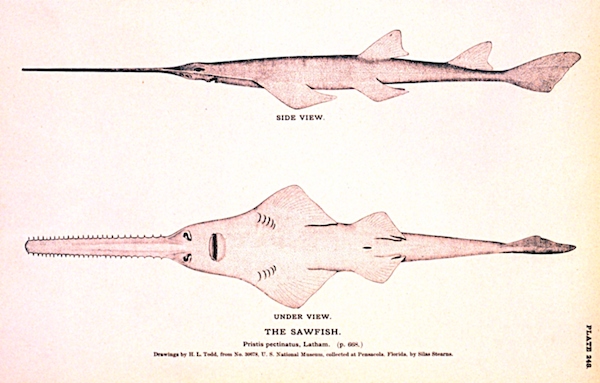 Sawfish are only superficially similar to sawsharks. They are not closely related, and evolved their saw-like snouts independently via a process called convergent evolution.