The beef with beef: how 12 strategies could drastically cut agricultural emissions 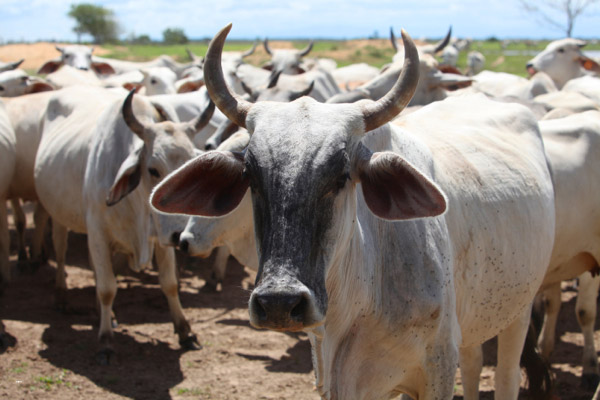 Herd of cattle in Colombia. Photo by: Rhett A. Butler.

“There are so many ways in which policymakers can help farmers boost productivity while mitigating climate change,” co-author Charlotte Streck of Climate Focus, said. “We need to dispel the notion, once and for all, that productivity and sustainability can’t work hand in hand.”

One of the 12 strategies focuses on shifting global diets, notably getting Americans to eat less beef while encouraging the Chinese to refrain from adding beef to their diet. According to the report, the production of beef alone represents a hefty 35 percent of agricultural emissions.

“There’s no way around it,” explained Streck. “Cows are incredibly inefficient food sources. They eat an enormous amount of feed and require a lot of land and water resources. Pigs, chickens and sustainably caught or raised fish, not to mention non-meat proteins are so much better for the climate—and healthier for people as well.”

While per capita beef consumption is declining in the U.S. from a high of nearly 90 pounds annually in 1976, the report finds that “the U.S. still consumes the highest amount of meat per capita of any major economy, more than double what is considered appropriate for a healthy diet.”

Policies that shift Americans from beef to other meat or non-meat protein sources could have a major impact on mitigating climate change, according to the report. The challenge may prove even easier in China: experts predict that red meat consumption will jump over 100 percent in China by 2050. But the report’s authors argue it doesn’t have to be this way.

“Because China already has a climate-friendly diet and hasn’t yet embraced beef, it’s still possible to discourage the consumption of more beef without changing the country’s traditional beliefs and culture,” said co-author Amy Dickie with California Environmental Associates. “Steering the Chinese diet in a more climate-friendly direction would yield enormous benefits for the country’s health and food security—as well as the global climate.”

Cutting food waste is another way to slash emissions and better feed a growing population, according to the report. The FAO estimates that around one third of the world’s food is never consumed, but instead lost in transit or intentionally thrown away after it reaches retailers and consumers. Other estimates have put this number closer to 50 percent. Either way, wasted food comes with a massive global warming impact.

“The carbon footprint of food wastage is estimated at 3.3 [gigatons of carbon dioxide equivalent], making it the third largest source of emissions after China and the U.S.,” reads the report. Wasted food also exacerbates freshwater scarcity, land and water pollution, and food insecurity. In fact, drastically curbing food loss and waste could also go a long way toward feeding a growing planet. 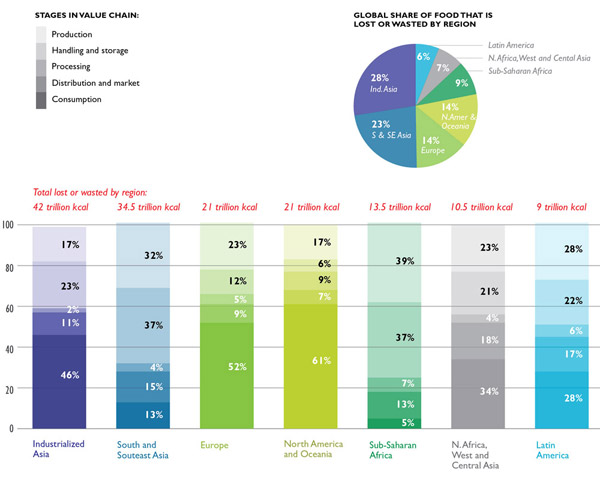 The huge impact of food waste and loss. Graph courtesy of Strategies for Mitigating Climate Change in Agriculture. Click to enlarge.

“Simplistically calculated, cutting current food wastage levels in half has the potential to close the 70 percent gap of food needed to meet 2050 demand by roughly 22 percent, potentially making the reduction of food wastage a leading strategy in achieving global food security,” reads the report.

The report recommends that the U.S. and EU take a hard look at their “sell by” and “best by” dates in order to stop consumers from throwing away perfectly-edible food, and combat a widespread policy in many grocery stores where food is discarded if it doesn’t meet certain aesthetic standards, such as shape in color. Meanwhile, both China and the U.S. should tackle oversized portions in restaurants and catering.

“In [Chinese] university canteens, one third of food purchased is wasted, and in urban residences, food waste has increased four-fold since the 1980s,” reads the report.

Meanwhile, food loss could be curbed in sub-Saharan Africa and Southeast Asia with better cooling and storage practices.

A third recommendation from the report looks at the potential for agricultural landscapes to store more carbon in soils, crops, and trees. According to the report, farmlands could sequester between 700 and 1,600 megatonnes of carbon dioxide equivalent by 2030.

“There is a justified concern from a sizable segment of the scientific community that an over-emphasis on the benefits of soil carbon sequestration may detract from other measures in the agricultural sector which are at least as effective in combating climate change,” reads the report. “However, most practices that increase the carbon content in agricultural soils are good agricultural practices anyway and lead to increased yields and water retention.”

“Agriculture is the largest cause of deforestation worldwide,” Dickie said. “Improvements to agricultural practices, as we’ve highlighted in this report, have so many benefits, including a reduction in deforestation and pollution of waterways.” 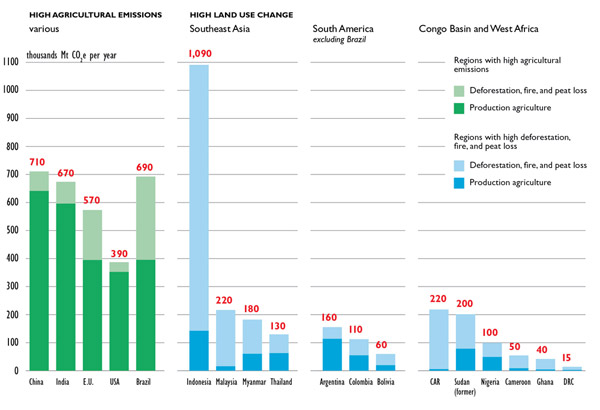 12 recommendation from the report: Strategies for Mitigating Climate Change in Agriculture 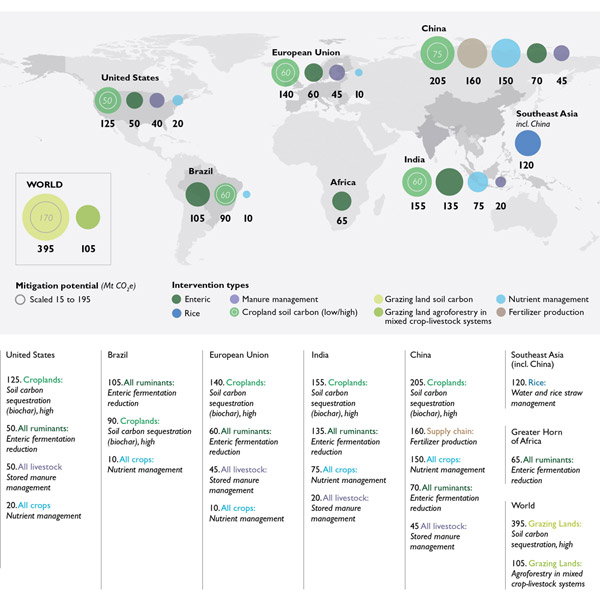 (12/19/2013) If you want to lower your greenhouse gas emissions, choose chicken or poultry over beef and dairy, according to a massive new study in the Proceedings of the National Academy of Sciences (PNAS). The study finds that global cattle production—both for beef and dairy—is responsible for a whopping 77 percent of the world’s greenhouse gases attributed to livestock. Meanwhile, pork and poultry account for only 10 percent the greenhouse gases from livestock.

Scientists’ beef with land use decisions

(11/25/2013) When food goes to the garbage can instead of someone’s stomach, it is easy to see a wasted opportunity. The resources used to grow and transport that apple or hamburger went to the landfill. The Union of Concerned Scientists (UCS) is bringing another, less visible, form of food waste to the table, the waste created by eating foods that are inefficient to produce, like beef.

(09/09/2013) Palm oil imports into Europe for use as car fuel increased by more than three-fold since 2006, raising concerns than renewable fuels targets may be contributing to deforestation, displacing marginalized communities, and driving greenhouse gas emissions in Southeast Asia, finds a new study published by the International Institute for Sustainable Development (IISD).