Since the arrival of Homo sapiens, other species have been going extinct at an unprecedented rate. Most scientists now agree that extinction rates are between 100 and 1000 times greater than before humans existed. Working out what is driving these extinctions is fiendishly complicated, but a new study by scientists from the University of California, Davis and the Nebraska Cooperative Fish and Wildlife Research Unit suggests that human life expectancy may be partly to blame.

“Increased life expectancy means that people live longer and affect the planet longer; each year is another year of carbon footprint, ecological footprint, use of natural resources, etc.,“ the authors write. “The magnitude of this impact is increased as more people live longer.”

The study used a computer model to examine human impacts on birds and mammals. By comparing the number of invasive and endangered species between countries, the researchers examined the effects of many human variables such as gross domestic product (GDP), pesticide use, tourism, agriculture, wilderness protection, global trade, regulation and life expectancy. 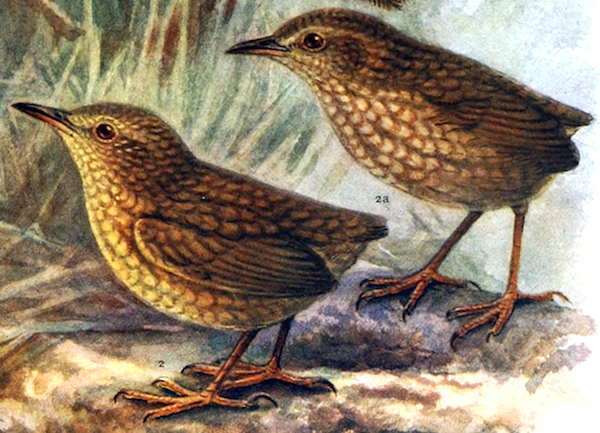 The Stephens Island Wren (Xenicus [Traversia] lyalli) was a flightless, nocturnal bird limited to one small island off the coast of New Zealand. It was driven to extinction by cats in the late 1800s.

“It’s not a random pattern,” said lead author Aaron Lotz, a postdoctoral scholar in the Department of Wildlife, Fish and Conservation at UC Davis. “Out of all this data, that one factor — human life expectancy — was the determining factor for endangered and invasive birds and mammals.”

The study also looked at the effects of wealth, with GDP per capita strongly linked to increased numbers of both invasive and endangered bird and mammal species.

“Humanity’s global influence is orders of magnitude greater than that of any other species, primarily because of the large human population size, anthropogenic CO2 production, biomass consumption, energy use and geographical range size,” the writers state in their paper.

When comparing countries, New Zealand came off as the worst with a dramatic decline in biodiversity since human colonization. This is partially because its absence of native land mammals has meant that native fauna has evolved in insolation from many types of predators. Once introduced by human colonists, these invasive animals ravaged the country, driving many native species to extinction. African countries, by contrast, had the fewest invasive species, partially explained because lower levels of international trade introduced fewer exotic stowaways

“Even though the analysis in this study does not determine mechanisms, the patterns observed in this study clearly suggest that there is a relationship between humans (i.e., living longer and thus having a longer negative impact on the planet) and the loss of endangered species,” Lotz said.

“We must continue to make direct links between people and nature and give people incentives, tools, and the capacity to manage ecosystems sustainably. Some studies have this view that there’s wildlife and then there’s us. But we’re part of the ecosystem. We need to start relating humans to the environment in our research and not leave them out of the equation. We need to realize we have a direct link to nature.”

(03/17/2014) Moas were a diverse group of flightless birds that ruled over New Zealand up to the arrival of humans, the biggest of these mega-birds stood around 3.5 meters (12 feet) with outstretched neck. While the whole moa family—comprised of nine species—vanished shortly after the arrival of people on New Zealand in the 13th Century, scientists have long debated why the big birds went extinct. Some theories contend that the birds were already in decline due to environmental changes or volcanic activity before humans first stepped on New Zealand’s beaches. But a study released today in the Proceedings of the National Academy of Sciences (PNAS) finds no evidence of said decline, instead pointing the finger squarely at us.