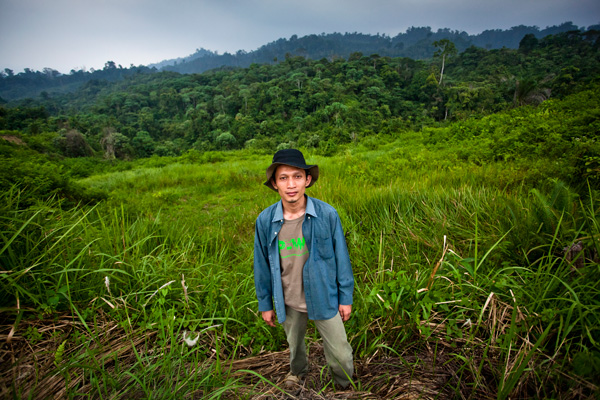 An Indonesian has won the world’s most prestigious award for environmental activism for his efforts to fight illegal logging, forest encroachment for palm oil production, and a policy that would open up vast swathes of an endangered ecosystem for mining and industrial plantations.

Rudi Putra, a biologist who works in Sumatra’s Aceh Province, was on Monday honored with the $175,000 Goldman Environmental Prize. Putra was selected as the “Islands and Island Nations” winner.

Putra was recognized for his campaign to dismantle illegal oil palm plantations within Sumatra’s Leuser Ecosystem, a habitat for critically endangered orangutans, tigers, rhinos, and elephants, as well as his activism around a plan to remove protected status for vast areas of forest across Aceh. That activism culminated in 2013 with a petition asking the Indonesian government to enforce conservation laws and reject Aceh’s proposal. The petition was signed more than 1.4 million times, catalyzing broader awareness of the issue and sparking intense international outcry.

The Goldman Environmental Foundation highlighted Putra’s effort to restore wildlife corridors in areas that were once illegal oil palm plantations.

With support from local communities, Putra approached local police directly to enforce land protection laws and shut down illegal palm oil plantations. He spoke of the hundreds of thousands of families who lost their homes and loved ones during the 2006 Aceh floods and their struggles to access clean drinking water.

He also approached palm oil plantation owners and reminded them that their actions were against the law. After Putra showed them the boundaries marking conservation areas, some owners voluntarily shut down the plantations and gave the land back to the government so that Putra and his colleagues could conduct restoration work.

Putra’s sustained outreach and strategic negotiations, deploying carrots and sticks when necessary, resulted in the dismantling of more than 1,200 acres of illegal plantations in the Leuser Ecosystem. The rehabilitation of these forests after the clearance of the oil palm has recreated a critical wildlife corridor now used by elephants, tigers and orangutans for the first time in 12 years. The Sumatran rhino population in the Leuser Ecosystem has also inched up in the past decade.

Ian Singleton, an orangutan conservationist who has worked with Putra for years, agreed that the activist has had an outsized impact.

“He has always struck me as one of the most focused and dedicated Indonesian conservationists I have ever met,” Singleton told Mongabay.com. “He is certainly not one to make a song and dance of things, and instead keeps a low profile, plugging away at an issue until eventually his hard work pays off.”

“Rudi is a leading member of a large team of various players working hard to halt a devastating new spatial plan in the province of Aceh, Sumatra, which would destroy huge tracts of the Leuser Ecosystem and spell the death knell for its remaining elephants and rhinos, and possibly orangutans and tigers as well. This battle is far from won, but without people like Rudi taking part it would be a far harder battle to win.” 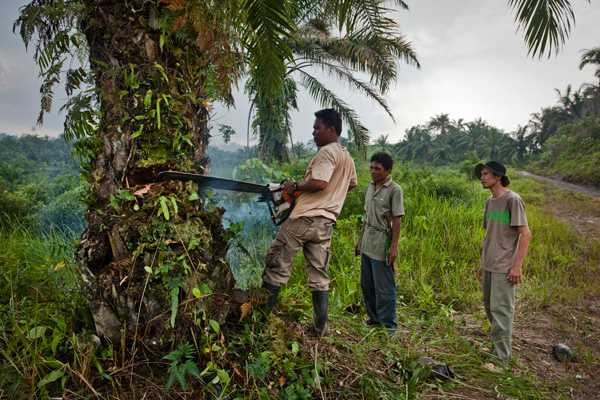 Rudi Putra watching an oil palm tree being cut down in Aceh. Photo courtesy of the Goldman Prize.

Due to criticism, Aceh’s spatial plan revision as originally proposed is now in limbo. The central government in Jakarta and the Aceh government have yet to come to an agreement that would allow the plan to proceed, buying environmentalists more time to make a case for protecting the province’s endangered forests. Putra is hopeful the Goldman Prize will now boost help that effort.

“The government has failed to do enough to stop forest conversion for oil palm — large areas of forest are not covered by the moratorium,” he told Mongabay.com. “It has also failed to stop encroachment, illegal logging, and mining inside conservation areas.”

“This fight is far from over but the Goldman Prize will help.”