One of the most iconic species of the ongoing climate change drama, polar bears (Ursus maritimus) have dropped in numbers as their habitat melts, with previous estimates forecasting a further 30 percent reduction within three generations. However, their situation may not be as dire as it seems. A new study, published in the journals Polar Biology, Ecology and Evolution, and BMC Ecology, suggests that polar bears are able to resist the breakup of ice cover in Hudson Bay by shifting their diets to suit a warmer world.

Polar bears are now designated as Threatened under the United States Endangered Species Act (ESA) and Vulnerable by the International Union for Conservation of Nature (IUCN) Red List. They are typically pagophilic (ice-loving), carnivorous mammals, feeding mainly on ringed seals (Phoca hispida) and occasionally consuming bearded seals (Erignathus barbatus), harbor seals (Phoca vitulina) and other marine mammals. Polar bears normally hunt by waiting at seal breathing holes, called “aglus.” Aglus are created and maintained by seals to ensure that they will have places to surface for air during the winter, even when the surrounding sea ice is several feet thick.

As the sea ice melts during the summer, polar bears in the Hudson Bay are forced on land where they typically fast, surviving primarily off fat stores acquired by consuming seal pups during the spring. As temperatures continue to increase due to climate change, the bears are forced to spend more and more time on land. At certain locations, this may equate to upwards of five months, and scientists have grown concerned that the more omnivorous and mixed diet available on land such as berries, grass and eggs would not provide the proper energy and nutrition polar bears require. 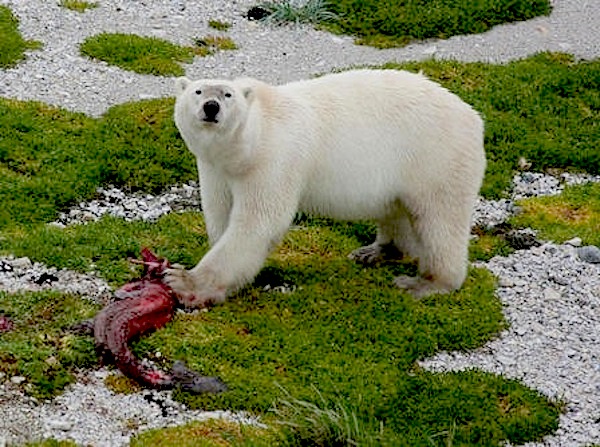 Researchers from the American Museum of Natural History published a three-part study in 2013 that describes the foraging behavior of polar bears in western Hudson Bay. They found that as ringed seal pup hunting seasons get shorter every year due to reduced sea-ice cover, polar bears are becoming more flexible, using a variety of techniques such as prey-switching, omnivory and food-mixing to make up for the reduction in their primary food source.

To study the diets of the polar bears, Gormezano and colleagues used a trained detection dog to locate polar bear scat for analysis. The scientists also filmed polar bear foraging behavior using camera traps, which can be seen in this video.

“The most interesting food consumed was starfish,” Gormezano told mongabay.com. “My detection dog (Quinoa) would signal on what I assumed were piles of white gravel – I had a hard time believing they were actually scat. Upon closer examination, I found polar bear hairs (from grooming) in them suggesting they were indeed scats consisting of nothing but ground up starfish. I learned to always trust my dog.”

Flexibility in foraging is key to persisting in a changing environment. Species that can eat a variety of things, called “generalists,” are often able to deal with shifting habitats more easily than others that rely on only a few specific food sources.

“Results from recent diet analyses suggest that polar bears are consuming a range of different foods on land in summer and have opportunistically shifted their diet since the onset of climate changes to include foods that have become more prevalent in the region like snow geese (Chen caerulescens caerulescens), their eggs, and caribou (Rangifer tarandus),” said Gormezano. 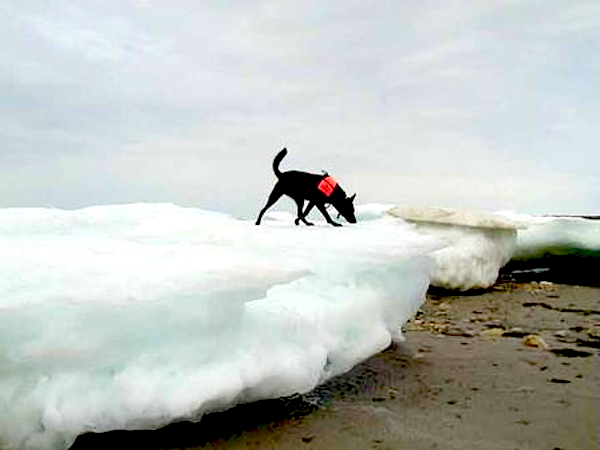 Quinoa the detection dog, a Dutch shepherd, sniffs for polar bear scat to be analyzed by the scientists. Photo by: L. Gormezano/AMNH.

This diet change is also partially due to exploding populations of lesser snow geese and caribou. This has caused an overlap in range between the geese and polar bears during the summer.

“Back in the 1960s, there were less than 2500 nesting pairs of lesser snow geese in the Cape Churchill Peninsula,” Gormezano said. “Since then, and in part because of access to high quality winter forage on agricultural land, the snow goose population has exploded to more than 50,000 nesting pairs today.”

Additionally, polar bears are migrating earlier, interrupting the incubation period of the geese.

“In years when overlap occurs, they have easy access to a high-energy food source which is usually not more than five kilometers from the coast,” Gormezano said.

Similar to the geese, caribou have also dramatically increased their population size from less than 100 individuals in the 1960s to between 3,000 and 5,000 today in the Cape Churchill area. It is not surprising that this population boom has caused an increase in their range closer to the coast, making them more available to polar bears.

While many of the foods consumed on land provide few calories per unit compared to seal, they also require relatively little energy to obtain.

“Polar bears have been observed opportunistically eating waterfowl, eggs and caribou in other areas of the Arctic, suggesting that the increased availability of these foods is likely the cause for bears eating more of them, not necessarily because of nutritional deficits caused by climate change,” Gormezano said.

While the scientists have revealed encouraging news that the polar bears do not need to fast during the warmer seasons, it is unclear how they will cope in the long run.

“At this point, we do not know how polar bears’ diets will change as a result of climate change,” Gormezano said, adding “however, the fact that polar bears possess the plasticity in their foraging behavior to adjust to changing food availability on land is encouraging.”