Carbon emissions from selective logging operations in tropical rainforests are roughly a sixth of those from outright forest clearing, finds a new study that evaluated 13 forestry concessions in six countries.

The study, published in the journal Environmental Research Letters by scientists from Winrock International, analyzed carbon losses from different aspects of logging operations, including timber extraction, collateral damage to surrounding vegetation, and logging infrastructure like roads and skid trails. The approach, which offers a more complete estimate than prior methodologies, shows that emissions are highly variable depending on the type of logging, the extraction rate, and the forest itself. Emissions in the study areas ranged from less than seven tons of carbon per hectare in Brazil to more than 50 tons per hectare in Indonesia.

The findings suggest that direct emissions from logging in the tropics are significantly lower than other drivers of deforestation. However the study has some important caveats. At the concession level, the study assumes all decomposition — thus emissions — happen right away. It ignores the fate of trees damaged by extraction — whether they subsequently die or are cleared by other actors, or if surviving vegetation sequesters more carbon as the forest recovers — as well as the carbon that may be stored for years to decades in forest products that are made from the harvested timber. It also assumes a 100 percent extraction rate of harvested timber. These factors could influence emissions estimates up or down. At the country-level, the study relies on U.N. data on timber production to extrapolate overall emissions from logging. Since U.N. data is self-reported, it leaves open the possibility that the numbers may not reflect the reality on the ground. 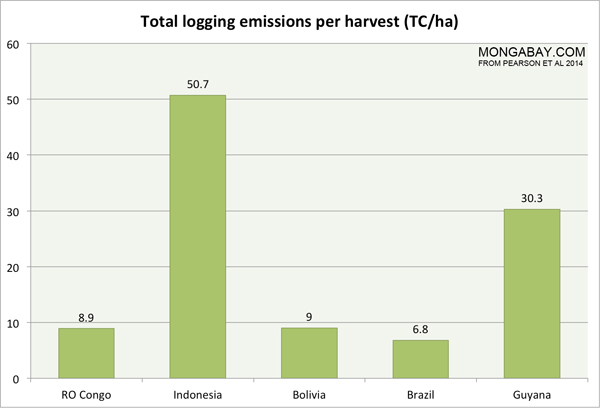 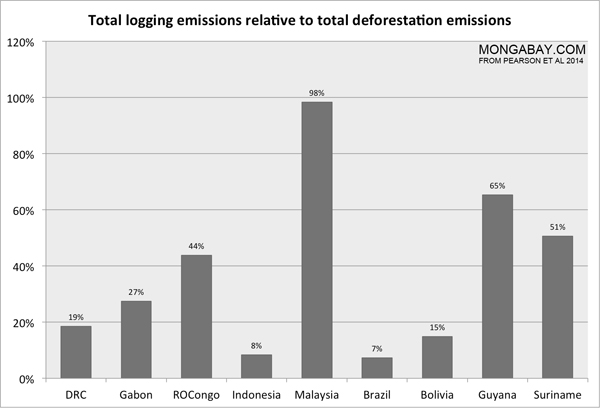 Nonetheless the study offers what is probably one of the most accurate estimate of emissions from tropical logging yet devised. The authors say the research could help inform policies, like the U.N.-backed Reducing Emissions from Deforestation and Degradation (REDD+) program, that aim to reduce damage from logging operations, in addition to conserving forests.

Co-author Sandra Brown says the approach offers an alternative to satellite-based assessment as it applies to REDD+.

“This method belies the notion that all REDD+ accounting must be based on remote sensing,” said Brown. “This cost-effective, accurate and relatively easy-to-use method can be used for REDD+ implementation and national inventories worldwide. We’ve already trained forestry staff in Guyana in this method and they are using it to estimate logging emissions at the national scale.” 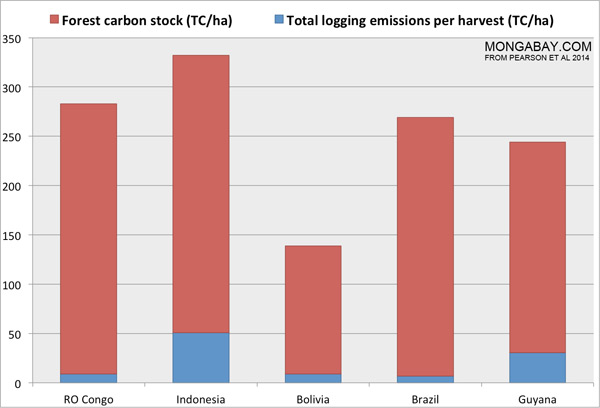 Logging is traditionally one of the biggest indirect drivers of deforestation in the tropics. Typically forests are first selectively logged for high value timber. While well-managed forests can be harvested into perpetuity, a more common situation is valuable timber is depleted after a few harvest cycles, increasing pressure to clear the land entirely of trees and convert it to a plantation or for agriculture. For example, in Indonesia, vast areas of forest that were first logged 40 years ago are today oil palm and timber plantations. Logging roads also grant access to speculators, farmers, and ranchers who chop down forests to grow food or produce commodities.

Therefore the decision to include logging as an acceptable activity under REDD+ has been a source of controversy. Some environmentalists are vehemently opposed to any REDD+ funds being used to subsidize industrial forestry in old-growth forests even if it is less damaging than conventional forestry. Others argue that REDD+ safeguards put into place during years of U.N. negotiations greatly limit potential damage from logging, while creating opportunities for governments and landholders to realize additional value from forests without destroying them. Lead author Pearson expresses the latter view.

“Our work shows low per-unit-area emissions from logging… demonstrates how forest management can be an alternative to deforestation in areas under pressure because of increases in forest value while maintaining forest cover and carbon stocks.” 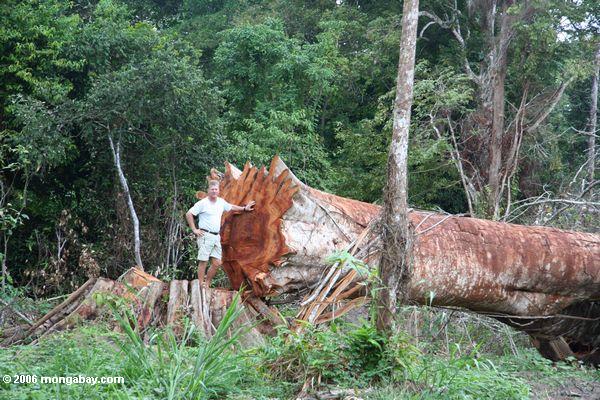