Last March was the fourth warmest on record, according to new data from the National Oceanic and Atmospheric Administration (NOAA). Overall, temperatures were 0.71 degrees Celsius (1.28 degrees Fahrenheit) above the 20th century average during March. Looking at the first three months of 2014, this year is the seventh warmest on record to date.

“This marks the fourth highest for March since records began in 1880 and the highest since 2010, the last March that warm-phase El Niño conditions were present,” reads an NOAA analysis.

Still, warming was not uniform in March: much of Canada and the eastern U.S. proved colder than average. Meanwhile, Russia and much of Europe proved significantly hotter than usual for this time of year.

“Extreme warmth over Eurasia more than offset the colder-than-average temperatures over most of North America this month, with the Northern Hemisphere observing its fourth highest land surface temperature on record,” according to the NOAA. In fact in some parts of northern Siberia, March temperatures were five degrees Celsius (nine degrees Fahrenheit) above the average. 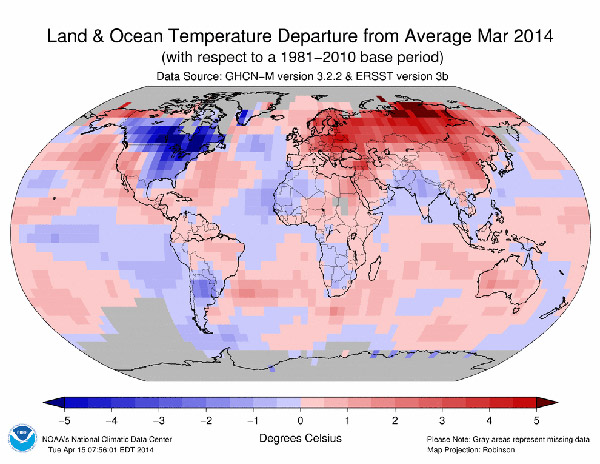 Meanwhile, prognosticators are predicting a possible El Nino for this summer or Autumn. An El Nino refers to unusually warm waters persisting in the Pacific Ocean off the coast of South America. Such conditions often drives extreme weather around the world. In addition, El Nino years, especially strong ones, tend to be among the warmest on record.

This March marks the 349th month in a row that saw temperatures above the 20th Century Average. Since record keeping started in the 1880s, global temperatures have risen 0.85 degrees Celsius (1.53 degrees Fahrenheit) due to rising carbon emissions stemming mostly from burning fossil fuels. The world’s governments have pledged to keep global temperatures from rising more than 2 degrees Celsius (3.64 degrees Fahrenheit) above the pre-industrial average, yet so far the planet is on track to warm significantly more if emissions aren’t cut quickly and aggressively. 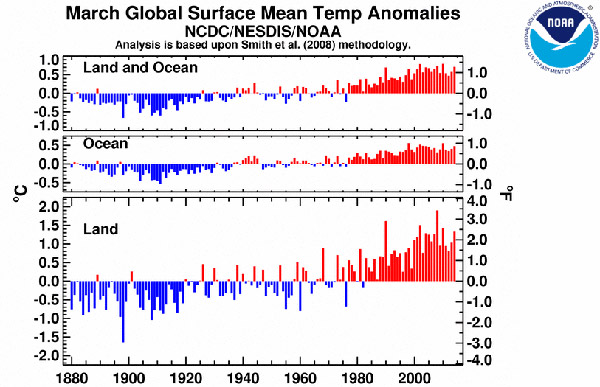