Aside from reducing the populations of the species sought for capture, commercial fisheries are also killing thousands of non-target creatures such as sharks, albatross, and sea turtles, collectively referred to as “bycatch.” However, the full extent of the problem is only beginning to be grasped. In an attempt to fill the many knowledge gaps when it comes to global bycatch rates and repercussions, a new study used two decades of data to identify the world’s most dangerous areas for bycatch species.

For the study, a research team led by Rebecca Lewison of San Diego State University’s Coastal Marine Institute laboratory, used data collected over the last 18 years to build a map of the world’s bycatch “hotspots.” These are places where at-risk species such as the leatherback turtle (Dermochelys coriacea), Amsterdam albatross (Diomedea amsterdamensis), Atlantic humpback dolphin (Sousa teuszii) and the Australian sea lion (Neophoca cinerea), were most likely to become the unintended victims of commercial fishing efforts.

The subsequent report, published in Proceedings of the National Academy of Sciences, revealed some significant findings. Sea turtles, for instance, were found to be at most risk in the southwest Atlantic, eastern Pacific and Mediterranean oceans, while the Southern Indian Ocean is the most dangerous area for seabirds. 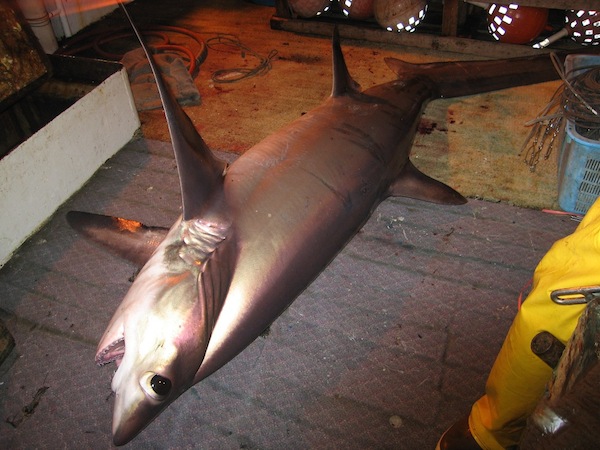 Sharks such as this bigeye thresher (Alopias superciliosus) are often accidentally caught by longline fishing boats.

While many species are regularly killed or injured as a result of becoming bycatch, “long-lived organisms” such as dolphins and sea turtles are of particularly high concern, according to Lewison. For instance, the Atlantic humpback dolphin (Sousa teuszii) breeds only every four to six years, so the survival of adults is of paramount importance to the survival of the species as a whole.

“As the name implies, long-lived organisms have evolved a strategy that includes living a long time and not becoming reproductively mature until late in life,” Lewison told mongabay.com “To be a viable species with this strategy, adult survival rates must be very high. Fisheries bycatch can reduce adult survival dramatically and can threaten the viability of these species.”

Advances in technology, like special devices used to exclude sea lions and turtles from netting and new albatross-friendly hooks, have the potential to dramatically lessen the impacts of bycatch if applied globally. However, the true extent and consequences of ecosystem damage caused by commercial fishing remains largely unknown.

“Our research moves beyond thinking about bycatch as a conservation issue and calls attention to the ecological consequences or cumulative impacts of removing a group of long-lived consumers from the ocean,” Lewison said. “Another name for this is trophic downgrading.” 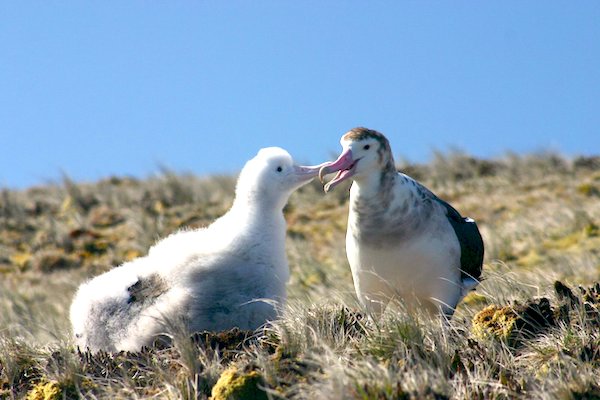 Amsterdam albatross (Diomedea amsterdamensis) breed on only one island in the Indian Ocean and are listed as Critically Endangered by the IUCN. Discovered in 1983, the entire species consists of an estimated 130 individuals. Photo by Vincent Legendre.

Trophic downgrading is an ecological theory that suggests reductions in populations of large-bodied species – also called “megafauna” – can have profound environmental impacts. Prey species, no longer bounded by large predators, can proliferate out of control. One example of this is the way in which deer populations in America and Europe have exploded in the absence of wolves.

However, because of knowledge gaps and the complexity of research required to answer these questions, marine biologists have only scratched the surface of this topic.

“You guessed it, we don’t have the data to predict what will happen to ocean systems if megafauna continue to be depleted,” Lewison said. “The trophic cascade data that has been presented is extremely hard to evaluate given the challenges of studying trophic processes of marine systems.”

(11/18/2013) A recent study from the Biological Conservation journal brings shocking news: every year across the globe, an estimated 400,000 seabirds are killed by gillnets. Gillnets, a common term for any net used to entangle and catch fish, are used all over the world, and at any depth. These nets, whether used in subsistence or commercial fishing, trap anything that swims through them. When unintended marine wildlife, or “bycatch,” is caught in these nets, the results can be significant.

(11/11/2013) Bycatch, a side-effect of commercial fishing in which non-target species are accidentally caught, is linked to severe population declines in several species. Sea turtles are particularly impacted by small-scale coastal gillnetting practices, in which large nets are deployed and indiscriminately snag anything of a certain size that attempts to swim through them. However, that may soon change.