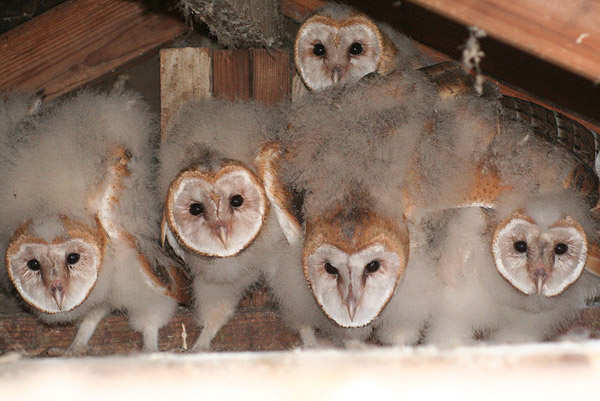 A brood of barn owls. Photo by: chdwckvnstrsslhmn/Creative Commons 2.0.

This year the Hanta virus has already caused 15 deaths in Chile, according to reports in The Santiago Times. It isn’t always fatal—the 15 deaths were of a total of 36 cases over six months—but the symptoms are severe. Those affected experience flu-like symptoms, as well as nausea, vomiting, diarrhoea and trouble breathing. As is the case with many viruses, those most at risk of death are infants, the elderly, and anyone with compromised immune systems. But now Chile is using a novel method to fight the disease: owls.

The Hanta virus spreads via rodents’ feces to humans. High-risk places include warehouses, sheds or rarely-used weekend homes that are left untouched for long periods, any building where rodents might enter and defecate. When a person enters the closed space, they may inhale the dust that contains tiny particles of the feces and with it, the virus. The virus expires when it is exposed to sunlight, so officials recommend opening the door to any enclosed space to let in air and entering only after an hour or so to open windows.

More people have been hit by the virus this year in Chile than before and experts believe it could be due to the many fires that have raged in almost all sectors of Chile. Officials are concerned that the fires pushed rodents, and the viruses they carry, into more densely populated areas, increasing the risk of exposure for the general population. The answer? Call in the birds. Specifically, owls.

CONAF, the governmental organization that administers forest policies and national parks in Chile, is working to encourage owl species such as barn owls (Tyto alba), known as lechuza blanca in Chile, and the Magellenic horned owl (Bubo magellanicus), known locally as Tucúquere to proliferate. Officials hope that by providing more nesting and breeding sites for the owls they will have more opportunities to mate and breed, increasing the population and thereby reducing the rodent population through predation. This entails building simple wooden boxes that serve as nests for the owls. Boxes were installed in the Reserva Nacional Lagos Peñuelas in 2002 and have been very successful, with the boxes producing around 30 chicks per year.

“Given the success we have had [by providing nesting opportunities for owls], we consider the owl program to be a useful natural method to help control disease-carrying rodents,” Moises Grimberg, director of the department within CONAF that deals with biodiversity and conservation, told mongabay.com.

Locally, other officials such as those at the Valparaíso prison have already decided to utilize the technique to reduce the rodent population. CONAF has called on officials from other areas of Chile to come and view the boxes in the reserve so they can apply the same system in their own locality.

But public or private sector officials who want to encourage the owls to breed might find opposition in the form of superstitious locals. Rather like a black cat crossing your path was once seen as bad luck, in parts of Chile owls are also still viewed as an ill omen. The superstition states that if an owl hoots near a certain house someone will die there. Given the recent reports of so many deaths from the Hanta virus, there’s hope that owls will soon be treated as a bringer of good luck, rather than bad.

(01/17/2014) Chile is probably best known for its volcanoes, earthquakes and the formidable peaks of the Andes, but as a country that spans 4,300 km (2,670 miles) from top to bottom, it also boasts a huge variety of bird life. And, until recently, it was home to what was thought to be the largest population of black-necked swans (Cygnus melancoryphus) in South America. Not long ago, these swans, as well as 100 other species of rare or vulnerable bird species, could be seen nesting in the Carlos Anwandter Nature Sanctuary in Valdivia, a Ramsar site that covers 12,000 acres in the south of Chile. But in 2004 the swans began to die.