The extinction risk faced by mammals is often in the limelight. But it may be surprising to learn that next only to primates, chelonians—or turtles and tortoises—are the world’s most imperiled vertebrate group.

“It is important to conserve chelonians as they are such a distinct group among reptiles [because of] their characteristic shells and [that they] are much older than the typical reptilian groups like crocodiles, lizards and snakes,” said Arun Kanagavel of the Conservation Research Group at St. Albert’s College in Kochi, India. “Unfortunately, they are also one of the most endangered vertebrate groups in the world.”

Recently, Kanagavel and his team conducted research on two rare chelonian species of India’s tropical Western Ghats region, one of the world’s most important biodiversity hotspots, with many species of amphibians, fish and reptiles that are found nowhere else. The research focused on the abundance and distribution of the Travancore tortoise (Indotestudo travancorica) and Cochin forest cane turtle (Vijayachelys silvatica). Additionally, the team interviewed local communities and assessed threats to the chelonians. They published their results in three journals: The Asian Journal of Conservation Biology, ISRN Biodiversity, and The Journal of Threatened Taxa. 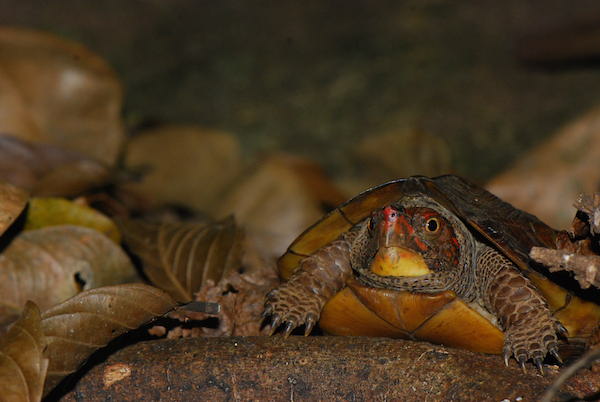 Tortoises usually live on land and are not very dependent on water, while turtles typically remain in or around water bodies. Unlike most turtles, however, the cane turtle can live in moist areas and does not show a preference for standing water. Like many other chelonians, both the Travancore tortoise and Cochin forest cane turtle are threatened with extinction. The tortoise is listed as Vulnerable and turtle as Endangered by the IUCN Red List of Threatened Species.

To gain a sense of population numbers, the researchers surveyed 240 large plots in the Anamalai and Agasthyamalai hill ranges in the Western Ghats from December 2010-2011. Of the 240 plots, 18 were found to have the chelonians, with tortoises being more abundant than turtles.

To determine the level of risk the chelonians face from hunting, the researchers conducted a total of 104 interviews in local indigenous and non-indigenous communities, as well as at Forest Department stations following field surveys. Additionally, 72 questionnaires were issued at eight local settlements. Although the Wildlife Protection Act of 1972 prohibits wildlife hunting in India, the researchers found that both chelonian species were captured and consumed. The tortoise, however, was eaten more often.

Contrary to previous research, the study suggests low population densities for both species. While this may be partly due to different sampling strategies and the secretive nature of the chelonians—both become active at twilight and often hide in leaf litter—the researchers also note impacts of forest fires and collection of the chelonians for food by local communities.

“A threat that has been often neglected is the issue of local, non-commercial utilization of these species by indigenous and non-indigenous communities within and in proximity to the forest areas, which is of high intensity in places,” Kanagavel said.

“In terms of over-exploitation, the Travancore tortoise is utilized much more than the Cochin forest cane turtle, since the [smaller] cane turtle leads to very little consumable meat,” Kanagavel said. “Moreover, the cane turtle is considered as a bad omen by a few indigenous communities, and the bad smell that they are known to emit when picked up discourages communities from collecting them.”

In addition to being used as a food source, the researchers found that seven percent of respondents considered tortoise meat to have medical properties that could aid in curing hemorrhoids. Others associated the meat with aphrodisiacs, curing asthma, increasing physical strength and promoting growth in children. 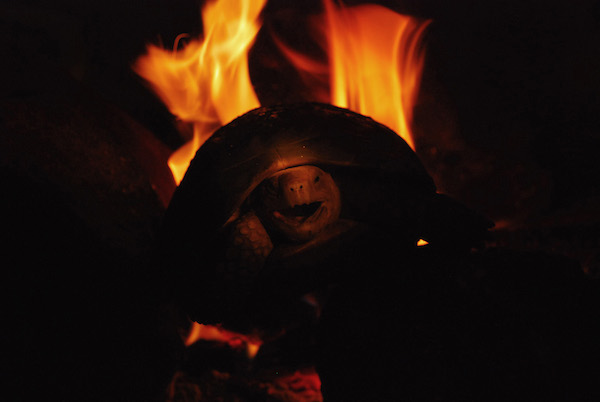 A Travancore tortoise cooks in a fire. Photo by A. Kanagavel.

According to Kanagavel, both the indigenous and non-indigenous communities are aware that it is illegal to collect and consume the chelonians. That the species is range-restricted and threatened, however, is not as well known, though some individuals say they don’t find the same number of chelonians as they did in the past, implying that the population has become smaller.

These two chelonian species are omnivorous, eating both animal and vegetable matter, and may help spread seeds around their habitats. Additionally, the cane turtle might serve as an indicator of environmental quality as its range is limited to evergreen and semi-evergreen habitats.

The Travancore tortoise merits more conservation attention than does the cane turtle, Kanagavel said, as it is seen as a traditional and cultural part of indigenous communities and local support for the species is vital to its conservation.

Although perhaps difficult to achieve in the region, Kanagavel also suggests setting a limit for the number of chelonians that can be collected each year, or designing a center managed by the indigenous communities with the goal of implementing breeding programs and showing the chelonians to tourists.

“Although there is no silver bullet for conserving these chelonians, a combination of several measures, and collaborations between the three key stakeholders – Forest Department, local communities and conservation researchers would be necessary to effectively reduce chelonian use in the area,” the researchers write.

* This research was supported by the Zoological Society of London and The Rufford Foundation. 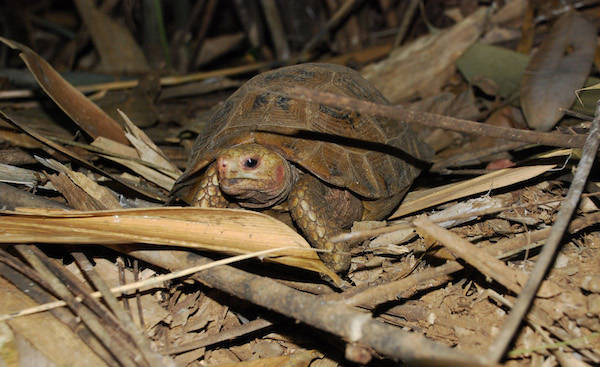 A Travancore tortoise in leaf litter. Photo by A. Kanagavel.

(10/01/2013) The Nilgiris Biosphere Reserve in southern India acts as a conduit between the biodiversity-rich Western Ghats, a mountain range parallel to the western coast of India and its eastern counterpart, the Eastern Ghats. Established in 1986 by Government of India, the 5,520 square kilometer reserve was recognized by UNESCO in 2000. However a new study in mongabay.com’s open-access journal Tropical Conservation Science finds that the lack of a transition zone in the Nilgiris Biosphere Reserve has undercut the aims of this crucial protected area.

(09/16/2013) The Western Ghats are a globally recognized repository of biological diversity for our planet. We know very little about most species found here, particularly the ecologically sensitive and spectacularly beautiful 179 amphibians. Astonishingly, 87% of all Western Ghats frogs are endemic and found nowhere else on the planet. Our collaborative research project with Drs Paul Robbins and Ashwini Chhatre examining biodiversity in production landscapes of Ghats unearthed some spectacular amphibians in 2013.