After years of criticism from environmental groups, Cargill says it will establish policies to eliminate deforestation, peatlands conversion, and social conflict from its palm oil supply chain. But activists aren’t yet sure what to make of the agribusiness giant’s pledge.

On Tuesday Cargill released a letter it sent to the Roundtable on Sustainable Palm Oil (RSPO), a body that sets eco-certification standards, in response to a Greenpeace report linking the palm oil it sold to Proctor & Gamble (P&G) to deforestation in Southeast Asia. The letter lays out a zero-deforestation commitment that includes building a fully traceable supply chain for palm oil, no conversion of high carbon stock or high conservation value areas including peatlands, and respecting the rights of indigenous and local communities to reject plantation development. The pledge includes the major elements contained in recent zero deforestation policies established by palm oil producers like Golden-Agri Resources and Wilmar, as well as palm oil buyers like Nestle, Unilever, Kellogg’s, Mars, and Proctor & Gamble. But the letter isn’t itself a policy.

“This update on our traceability programs and principles, as released in the letter to RSPO, is part of the on-going effort to develop and strengthen Cargill’s palm policies,” Cargill spokesperson Steven Fairbairn told mongabay.com. “We felt it was important to share these now, while this overall work continues. It sets out the continued commitment and progress we are making on sustainable palm and specifically to address key concerns that we, and many other stakeholders, share around a traceable supply chain, no deforestation, no peat and the rights of smallholders and local communities.”

Those goals were welcomed by the Rainforest Action Network (RAN), which has pushed Cargill for eight years on its palm oil sourcing practices, and Greenpeace, but both said the gesture falls short until it is backed by a time-bound policy.

“Rainforest Action Network welcomes this indication that Cargill is finally acknowledging it has a problem with Conflict Palm Oil. But for a company that presents itself as an agribusiness leader committed to innovation and agility, it needs to do a lot more than a express an intent to do something,” said Ginger Cassady, RAN’s forest program director. “A statement of intent is not the same as a binding, time-bound policy. To become a truly responsible palm oil supplier, Cargill must verifiably eliminate deforestation, peatland destruction, land grabbing and human and labor rights violations from its global operations.”

“Cargill’s willingness to commit to a No Deforestation policy that goes beyond RSPO and protects peatlands, signals that they are seriously trying to break their links to forest destruction,” Rahmawati told Mongabay. “It is an encouraging step but this is just a letter of intent. We urge Cargill to take rapid action to develop these principles into a detailed global policy and credible action plan that deals with their problematic suppliers like KLK and Musim Mas; a plan that also includes measures to prevent land-grabbing and social exploitation.” 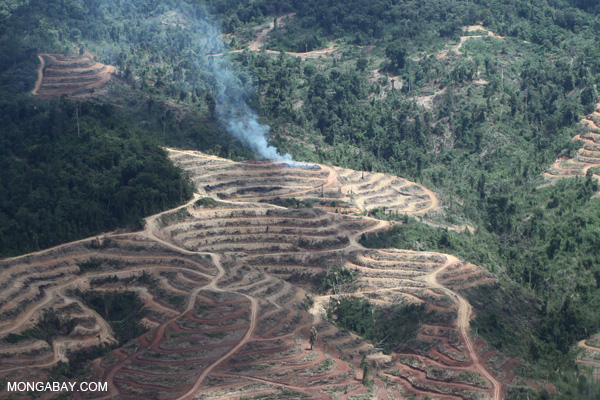 Cargill says its commitment applies to “the palm oil we produce, trade and process”, which suggests that suppliers will eventually be held to its guidelines, meaning they would have to avoid open-burning as seen in this oil palm plantation in Malaysia.

Cargill said it would indeed establish a time-bound policy and noted that its existing policy calls for cutting off suppliers if they are found to be in violation of RSPO standards and booted out of the organization.

“We have committed to releasing time-bound plans within the next 12 months and filing regular progress reports,” Cargill told Mongabay.

In response to how it would deal with companies like Musim Mas and KLK that have recently been singled out by activists for deforestation and social conflict, Cargill said: “Our existing policy clearly sets out that if the RSPO determines a palm oil producer is in violation of the RSPO principles and removed from the RSPO, we will cease to do business with that company. As part of our policy review, we are looking at developing and implementing processes that encourage the adoption of improved sustainability practices by suppliers, as well as methods to govern compliance.” 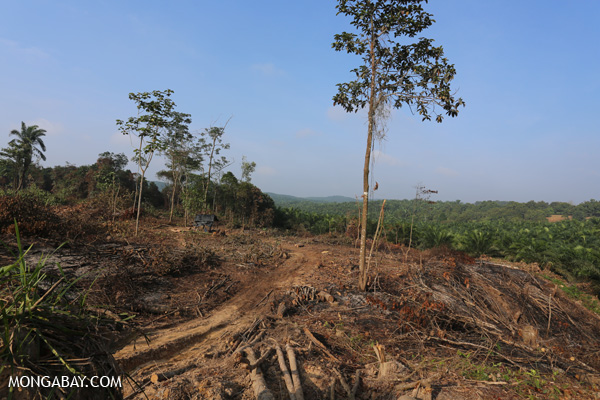 RAN said the commodity giant’s current position on these issues is less ambitious than its peers.

“It is clear that Cargill cannot rely on the RSPO alone to address the serious issues of forest and peatland destruction, protection of orangutans and tigers, climate pollution, land grabbing, social conflict and human rights violations stemming from Conflict Palm Oil production. Cargill is falling behind the ambitions of other traders, like Wilmar International, which has adopted a No Deforestation, No Peat and No Exploitation Policy.”

The group added that if Cargill establishes a strong policy, it could have ripple effects throughout the palm oil sector.

“Cargill is a major supplier of palm oil to global markets and one of the largest importers of palm oil into the United States. Its business lines touch all aspects of palm oil production, trade, refining and marketing as it moves palm oil from producers to end consumers. Cargill’s position gives it significant leverage in every link of the supply chain required to build traceable and responsible palm oil sourcing from growers to markets and to eliminate sourcing from Conflict Palm Oil producers.”

Deforestation for oil palm in Borneo.

The leverage potentially extends into other sectors as well. Cargill is a major player in the cocoa, soy, cotton and beef markets, among others. It has also been investing in forest carbon-based conservation initiatives.

On those fronts, the company says it is already working to reduce its environmental footprint across its other agricultural supply chains.

“Each supply chain has its own particular challenges and we are working in partnership with industry, government, NGOs to drive more sustainable practices relevant to each supply chain,” Cargill’s Fairbairn told Mongabay.

“As new information and knowledge comes to light, Cargill will adjust and improve policies in ways that are consistent with our goals of protecting forests, peat lands, local communities and human rights.”