Myanmar contains some of Asia’s largest forests, but has been losing them at a rapid pace during the last two decades as logging companies emptied woodlands to meet the demands of the lumber industry. In an effort to save its disappearing forests, Myanmar implemented a ban on log exports, effective March 31, 2014. However, the ban affects only raw timber exports, not milled lumber, throwing into doubt its ability to significantly curb deforestation.

Myanmar boasts a variety of environments – from the Himalayan foothills of the north, to the fertile plains surrounding the Irrawaddy River in its center, to the tropical forests and mangroves of its coastal south. These diverse habitats support a huge number of species, making it one of the most biodiverse places on the planet. Its residents include many endemic species, such as the white-browed nuthatch (Sitta victoriae), Myanmar snub-nosed monkey (Rhinopithecus strykeri), Burmese star tortoise (Geochelone platynota), and Burmese roof turtle (Batagur trivittata). In total, 233 threatened species are found here, 65 of them classified as Endangered, and 37 as Critically Endangered by the IUCN. 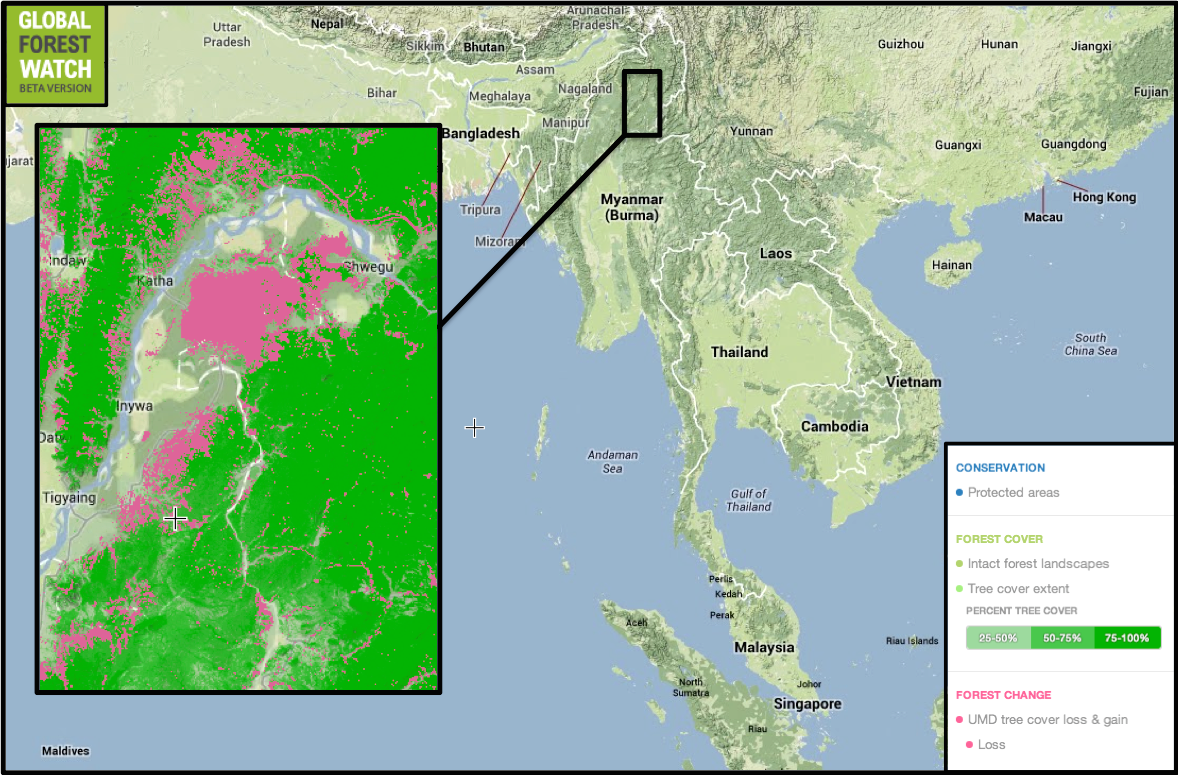 Deforestation has denuded the banks of the Irrawaddy River in the north of Myanmar, where some areas have lost more than half their forest cover. Courtesy of Global Forest Watch. Click to enlarge.

Habitat loss through deforestation is one of the primary drivers of population declines in Myanmar. According to Global Forest Watch, approximately 1.5 million hectares of forest were felled between 2000 and 2013, much of it harvested illegally. The damage is most concentrated along the northern reaches of the Irrawaddy River where, in places, more than 60 percent of the land has been logged over the past decade. Many of these areas show little to no forest grow-back, particularly along the river.

Without roots to bind the soil, riverbanks erode into the water, making rivers wider, shallower, warmer, and murkier. Warm water also holds less oxygen than cool water. Aquatic species that are adapted to clear, cold water may not be able to contend with these new conditions; for instance, silt can accumulate on the gills of fish, suffocating them. These effects echo through the food chain, impacting many species across many ecosystems.

The Irrawaddy dolphin (Orcaella brevirostris) is one such unfortunate bystander. Listed as Critically Endangered in Myanmar, scientists estimate only 58-72 exist in the Irrawaddy River. Scientists believe its decline is hinged on steep reductions in fish populations, caused, in part, by the impact of deforestation on water quality. Interviews with area locals indicate that the situation has worsened significantly in just the last two years. The reported average catch size by fishermen in 2012 was 25 kilograms (55 pounds); in 2014 catch-size had plummeted by more than 80 percent. In addition to fewer available fish for the dolphins, local fishermen have adopted new techniques to maximize catches. One of these, high-voltage electrical shocking, has been shown to kill dolphins that are swimming nearby. 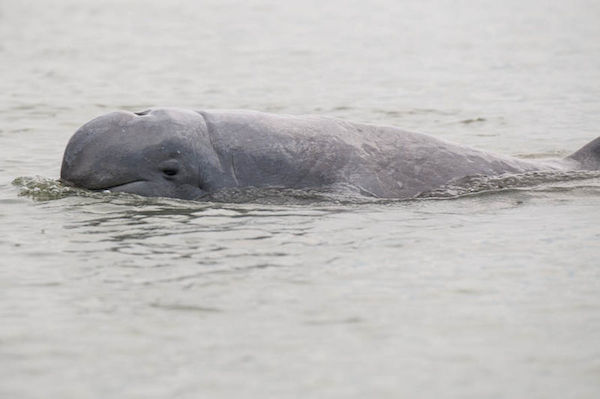 There are only 58-72 Irrawaddy dolphins left in the Irrawaddy River. Their decline is due in part to habitat degradation from deforestation. Photo by Stefan Brending.

Myanmar enacted the timber export ban in response to ecological repercussions, together with the fact that trees were simply running out. Even industry officials supported the ban, as remaining resources dwindled to point at which Myanmar was left without sufficient raw lumber to manufacture finished products. Teak (Tectona grandis), is especially valued for furniture and boats because of its durability and water resistance. Prior to the export ban, Myanmar exported an estimated third of the teak lumber supply worldwide, and was the only country that still exported raw teak logs from natural forests rather than from plantations.

According to Global Forest Watch, of Myanmar’s total land area of 67.7 million hectares, only approximately 6.3 million hectares – less than 10 percent – consists of intact forest. Much of this exists in the country’s mountainous north, where forests are less accessible to logging outfits. In contrast, there are no intact forests in the entirety of Myanmar’s eastern portion. This region of approximately 12 million hectares also contains no substantial protected areas – despite its status as a biodiversity hotspot. 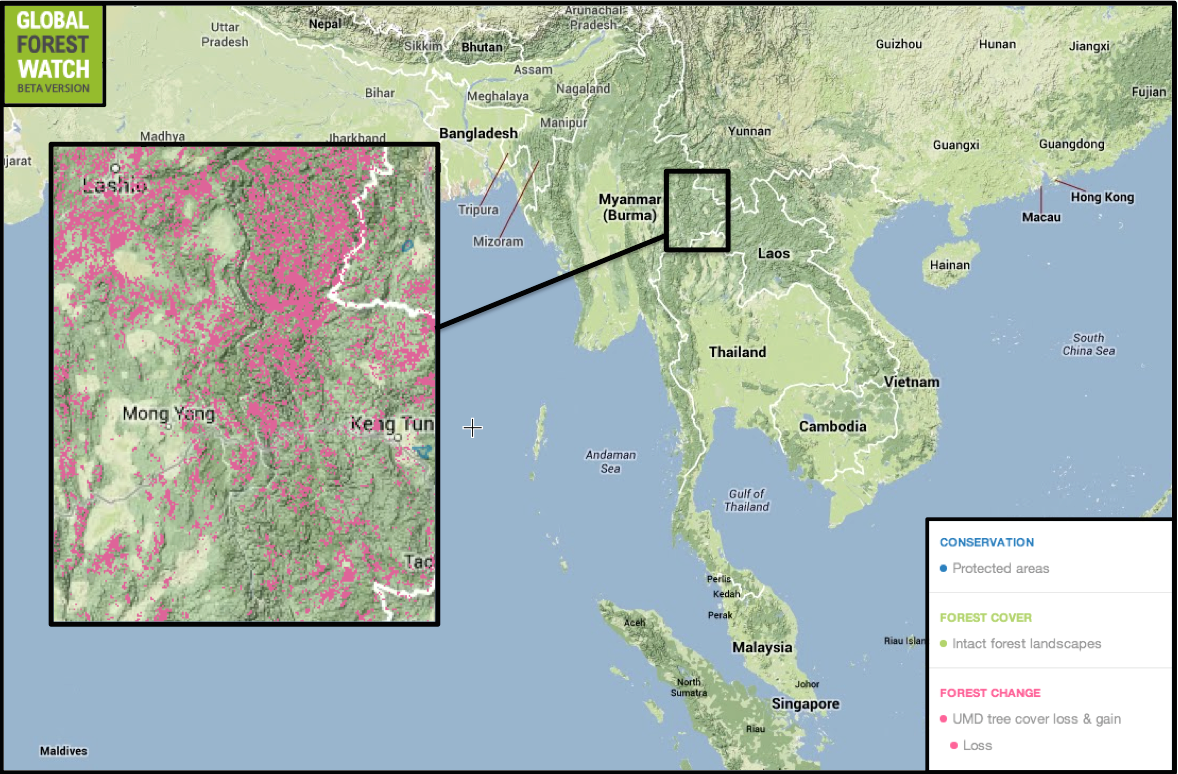 No intact forest exists in the entire eastern portion of Myanmar, and only one small area is protected. Courtesy of Global Forest Watch. Click to enlarge.

In addition to the export ban, Myanmar is also planning to reduce domestic-use harvest quotas for teak by 80 percent in 2015. However, as much of the country’s logging is done illegally, it remains to be seen how effective a new quota will be.

There are doubts as to how successful the ban will actually be when it comes to preserving Myanmar’s forests. While it effectively ends the export of whole logs, it does not affect milled timber. In response, many lumber yards are being set up throughout the country. One of these, established in Yangon by the Singapore-based Concorde Industries, plans on milling 10,000 tons of wood annually for export to Europe. Critics also cite a lack of clarity from the government regarding implementation of the ban and illegal harvests.

“Now there’s a strong push in the [Myanmar Timber Merchants Association] and the [Ministry of Environmental Conservation and Forestry] to clamp down on illegal logging, but it’s not clear to me what illegal logging in this context actually means,” Kevin Woods, a researcher with the NGO Forest Trends, told Myanmar Times.

“Does that mean that logging is being done by villagers and then sold to businessmen without the explicit permission of [the ministry]? Or could it also mean, as I feel it should … logging being done by crony companies in natural, unmanaged forests? None of that is clear to me from any statement made by any government officials.”

The rush to fill cargo vessels with timber before the ban became effective resulted in frenzies at wharves along Myanmar’s coast. Many exporters believed that either the ban would be rescinded or the deadline extended, and so had not made advance plans to ship their stores. Because of this, the total March export that was three times larger than the average monthly export in 2012, and an estimated 90,000 cubic meters (3.18 million cubic feet) of surplus timber remains unshipped.

The export ban had been in the works since the 1990s, but it took 20 years and the loss of millions of hectares of forest to make it a reality.

“Of course, this ban should have been imposed a long time ago, “a forestry ministry official told Reuters, “but it’s better late than never.” 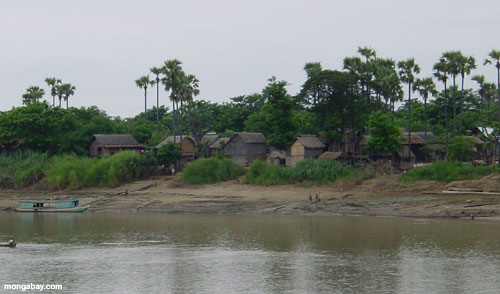 A riverside village in Myanmar. Photo by Rhett A. Butler..