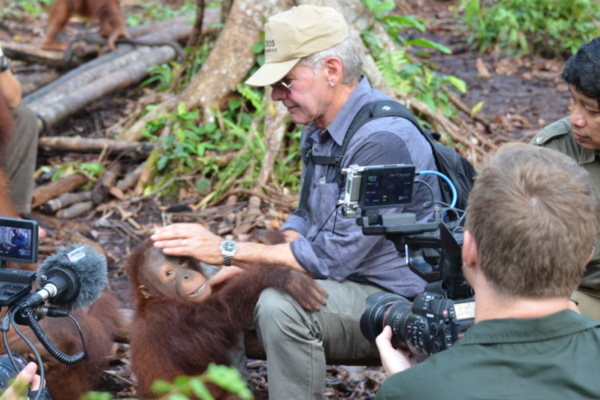 Harrison Ford with baby orangutans at a rehabilitation center for orphaned apes in Indonesia’s Central Kalimantan. Photo courtesy of the Years Project.

For years climate change activists and environmentalists have been clamoring for a high-profile, high-impact TV series about climate change to make Americans more aware of an issue that will affect billions of people around the globe in coming decades. This week they finally got it when Showtime released the first episode of Years of Living Dangerously, a big-budget TV series featuring a number of Hollywood’s biggest stars as reporters and correspondents. The series explores a range of issues around climate change, including drought in the American Midwest, conflict in the Middle East, and deforestation in Indonesia.

To get a bit more of the backstory on Years, which runs Sunday nights on Showtime, Mongabay.com caught up with Jeff Horowitz, who served as co-producer of the deforestation segment in the series. Horowitz is also the founder and director of Avoided Deforestation Partners, an organization that pushes for new solutions to address tropical deforestation, including market transformation initiatives via supply chain commitments from major commodity producers and buyers, as well as payments for environmental services programs like REDD+ (Reducing Emissions from Deforestation and Degradation).

The first episode of Years of Living Dangerously

AN INTERVIEW WITH JEFF HOROWITZ

Mongabay: Why did you want to get involved in producing a television series?

Jeff Horowitz: For last eight years, AD Partners has been involved in raising public awareness around the forest-climate connection and advancing scalable solutions to the world’s massive deforestation problem. While our organization’s high-level forest-climate events have helped inspire policy makers to further our collective goals, the simple truth is that the vast majority of people around the world, and particularly in the US, still do not know that this “slash and burn” method of agriculture, in places like Brazil, Indonesia and the Congo Basin, creates more carbon pollution than all the cars, trains and planes in the world combined. And that the vast majority of every day consumers have no clue that many of the products that they put in their grocery baskets contribute to deforestation and thereby climate change.

Being invited by the Executive Producers to co-produce the “Last Stand” (deforestation) story for the Years of Living Dangerously was the perfect opportunity to expand our reach. What better way to get out the urgent message about the evils of deforestation as well as promote potential solutions than through a major media project that will reach tens of millions of viewers. It was an honor to have played a substantive role in shaping this landmark television series.

Mongabay: What was your role in the Years project?

Jeff Horowitz: As co-producer of the deforestation segment referred to as “The Last Stand” (airing in episodes #1 and #2), my job was to work in partnership with Solly Granatstein, an amazing, Emmy award-winning director/producer to create the narrative arc that took the viewer from the global problem of the pollution caused by burning forests, to the political challenges faced by many rainforest nations as they try to regulate this practice, and back to the U.S. for a look at how consumer buying patterns can impact the way forests are protected. We recruited the best person I knew to tell this story: the actor/environmentalist, Harrison Ford. Harrison has been serving on the board of Conservation International for over 20 years. I would say that conservation is as close to a religion as it gets for him. I know all of us, Harrison, Solly, myself and the rest of the Years team, wanted to make this the best possible television piece on deforestation for a broad, mostly U.S., audience. We all felt that this project had the potential to make a huge impact. 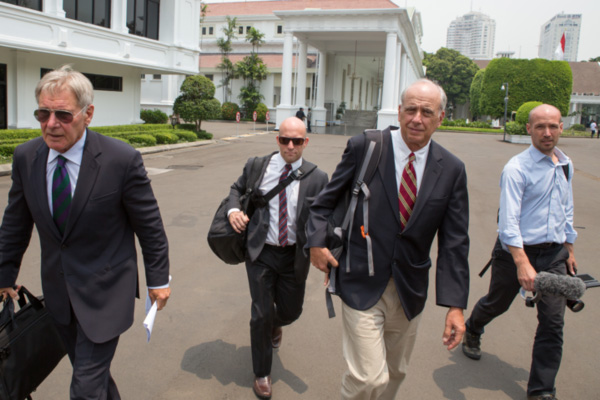 Mongabay: What was it like to be over in Indonesia with Ford serving as a hard-nosed investigative reporter?

Jeff Horowitz: While it has been many years since Harrison played the fictional character Indiana Jones, in real life that same energy is there all the way! Harrison Ford has extraordinary energy and drive, he was the first person up and ready to go, and he was a man on a mission when it came to finding the answers he was looking for. Harrison was really there to learn about the challenges facing Indonesia – to really get at the heart of why deforestation was happening, the consequences of this practice, and the people who were involved. And he also wanted to understand how to solve this problem. It’s obviously a subject that he cares about deeply.

Mongabay: What was the biggest surprise or challenge over there?

Jeff Horowitz: Two – first, flying over an almost completely decimated national park, called Tesso Nilo, was the biggest surprise to all of us. Over 80 percent of what was supposed to be a protected national forest was GONE, almost completely wiped out. From the air we could see fires still smoldering over this 82,000 hectare “preserve.” More than anyone, Harrison was visibly shaken by this discovery; we all knew he was going to do whatever he could to get to the bottom of why this devastation had been allowed to take place.

The more subtle challenge was trying to understand how to reconcile the conflict between Indonesia’s need for economic development and the world’s need to protect the climate. To my surprise, I found that many in Indonesia – especially in big cities like Jakarta – were either unaware or undeterred by the environmental dangers associated with deforestation. Most thought of palm oil production as simply a great way to bolster their country’s economy. This realization gave me a better understanding of the underlying challenges faced by enlightened leaders such as Indonesian President Yudhoyono. 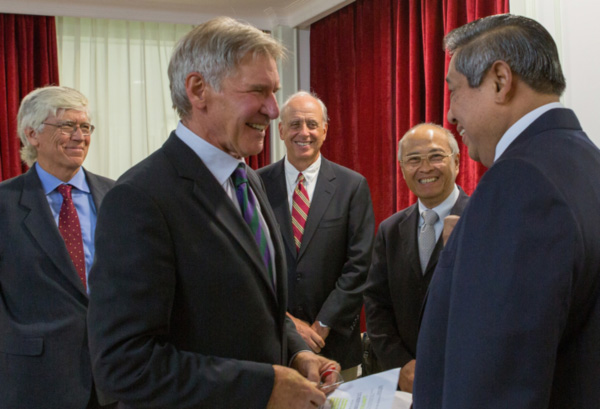 Mongabay: How’s the reception to Years been so far?

Jeff Horowitz: Amazing! Better than our wildest dreams. Even Pres. Obama tweeted his 40 million + followers about watching the show.

Mongabay: What do you hope comes out of the series?

Jeff Horowitz: This series has a reach – through Showtime, and through international distribution – which exceeds nearly every other public climate change communication project that has been done, and certainly anything we could have done on our own. We hope that it will help many many more people understand the forest-climate connection. More than anything else, we hope that it will serve to reinvigorate the national climate change dialogue and giving people a constructive way to talk about climate change — the greatest challenge of our lifetime! 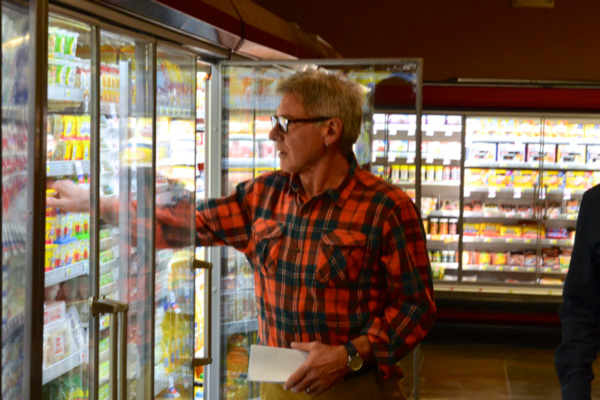 Harrison Ford looking for products that contain palm oil at a grocery store in San Carlos, CA. Photo courtesy of the Years Project.

Mongabay: How do efforts to slow deforestation in Indonesia link with viewers here in the U.S.?

Jeff Horowitz: It was very important to me personally to link the Years story to the work we’ve been doing with the Consumer Good Forum on taking deforestation out of major manufacturing supply chains. In addition to visually communicating the basic equation that deforestation equals climate change, we were also able to show Harrison walking through a U.S. supermarket, pointing out how many products use palm oil, and then talking about the impact on forests. We even shot some of the story on location at a Unilever plant, where we were able to talk about how Unilever has been at the vanguard of the sustainable supply chain movement, and is really making a huge impact by leading the way on sustainable practices in their industry. The story also looked at how Wilmar, who processes 45 percent of Indonesia’s palm oil production, was trying to change their policies to become a more sustainable company. All of these scenes help viewers understand the connection between deforestation, agricultural production, and many everyday consumer goods. It’s one of the key reasons we joined the Years project, and we hope that this will be the first of many media projects that give us the opportunity to tell what is ultimately a great story about our climate future. 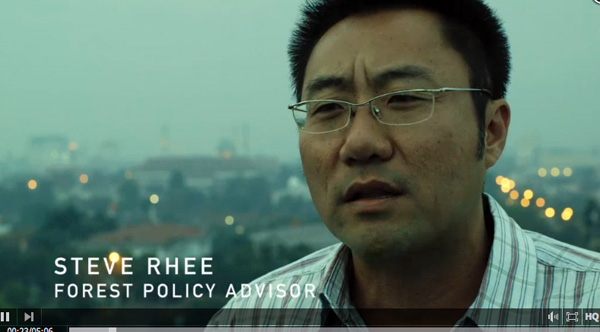 Forest policy advisor Steve Rhee talks about drivers of deforestation in Indonesia and why recognition of community rights in far flung parts of the world should matter to people globally. The Ford Foundation was a financial supporter of the Years project