Ants plant rainforests, one seed at a time

Deforestation is destroying forests around the world, but its effects are especially obvious in the Amazon Basin. Due to cattle ranching, soybean farming, logging, and slash-and-burn agriculture, the rainforest is disappearing at a rapid pace. In 2011, mongabay.com reported that a whopping 52.7 percent of Bolivia’s trees have been cut down, one of the highest deforestation rates in the world. But a recent study published in the Journal of Ecology offers a unique solution to replanting the deforested landscapes: ants.

“We selected two montane forest remnants … characterized by high rates of deforestation [and] where forest and fire-degraded habitats formed sharp borders, where the forest was well preserved and where the vegetation in the degraded areas had similar compositions and successional stages,” Silvia Gallegos and Mattias Schleuning, lead researchers of the project, said in a communication to mongabay.com. Rainforest regeneration depends on the ability of tree seeds to colonize new regions, but many deforested areas are too dry and hot for seeds to germinate. Photo by Rhett A. Butler.

Seed dispersal is an everyday event in forests, and is vital to keeping the forest growing and healthy. It occurs when animals or nonliving factors such as wind move seeds away from the trees from which they dropped. With animals, seed dispersal normally is due to food caching; for example, squirrels bury acorns in the ground in the fall for food reserves in winter.

“The seeds of most tropical forest trees are primarily dispersed by birds and mammals that carry the seeds over medium to long distances and then defecate them (primary seed dispersal),” Gallegos and Schleuning said. “Once on the ground, the seeds can attract other dispersers (secondary seed dispersers), such as ants, dung beetles and some rodent species.”

The team tracked seed dispersals in three areas: forest interior, degraded habitat close to the forest, and degraded habitat far away from the forest. They did this by depositing 1,440 Clusia trochiformis seeds (a tree known for producing fat-rich, orange seeds much-loved by primary dispersers) in 72 different spots, then observing how and where they were dispersed.

Ants are attracted to the aril (the seed’s fat-rich coating), parts of which stay on the seed after primary dispersal. Ants will often carry the whole seed to their nest, or remove the aril and leave the seeds in their wake. Scientists believe deposition either on the forest floor or in an ant’s nest (called “microsites”) enhances germination.

“Surprisingly,” Schleuning and Gallegos wrote, “ants [consumed or carried away] the seeds immediately (less than two minutes in most cases), and preferred the seeds with aril.”

But how does this help regrow forests? Fire-degraded areas, like the ones left behind after deforestation, are dry and hot, making it hard for established forest trees to disperse seeds to these regions. Because scientists predict that drought frequencies are likely to increase, understanding the methods of forest regeneration is vital to conservation.

“Under this scenario, the role of ants in sheltering seeds and bringing them to moist microhabitats could get more important,” Schleuning and Gallegos wrote. “This discovery is significant because the regeneration of the forest in fire-degraded areas is very slow, mainly because of the lack of seed dispersal from the forest and because of the harsh conditions for germination.”

The inhospitality of barren, deforested areas can make it difficult for seeds to grow, stymying forest regeneration where it is needed most. But ants can take these seeds and leave them buried in or near their underground homes, in effect “planting” them in places much more suitable for germination. When these seedlings become trees and drop their own seeds, the cycle can begin again.

“As we found that ants move seeds to more suitable sites for germination and establishment, we have revealed their important role for enhancing natural forest regeneration in the deforested areas,” said Schleuning and Gallegos. 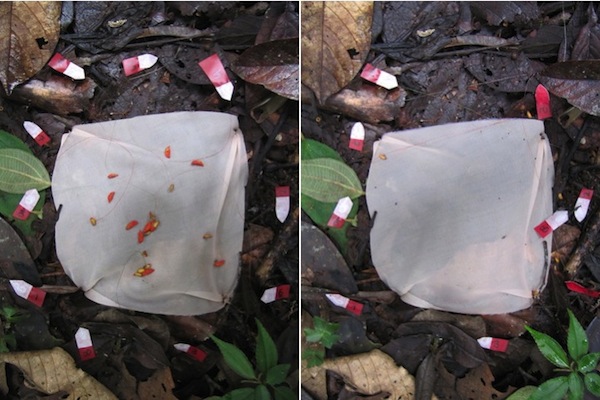 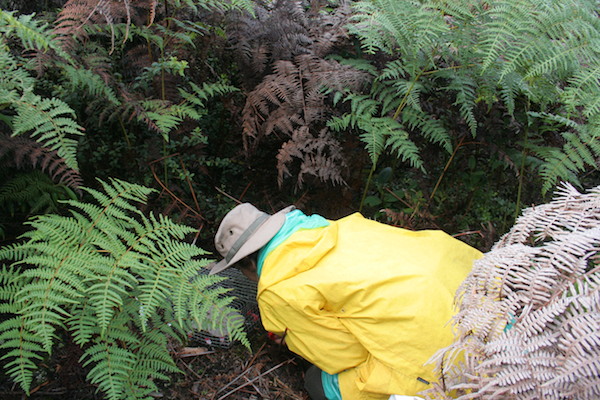 (06/21/2013) A new species of ant has recently been discovered in the Hortarium of the Los Baños University in the Philippines. Scientists named it the pirate ant (Cardiocondyla pirata) due to the female’s unique pigmentation pattern: a distinctive stripe across the eyes that resembles a pirates’ eye-patch. The pirate ant belongs to a genus Cardiocondyla that are distributed worldwide, but mainly found in the tropics.