Madagascar is one of the world’s hotspots for amphibian diversity, home to so many frog species that many of them don’t even have names. But soon the island may also harbor a fungus causing drastic declines – even extinctions – of frogs around the world. Ironically, the wildlife trade that’s often blamed for helping spread the disease may also give scientists a chance to prevent it.

In a study recently published in PLoS ONE, researcher Jonathan Kolby, from the James Cook University in Australia, reported the first positive test for the deadly fungus in a shipment of frogs exported from Madagascar. His findings may give conservationists time to ramp up surveillance and create new strategies to keep the fungus at bay.

“The global wildlife trade moves millions of animals annually, and I noticed how this created a scientific opportunity to sample a high volume and diversity of amphibians that are commonly exported to the U.S. for the exotic pet trade,” Kolby told mongabay.com. 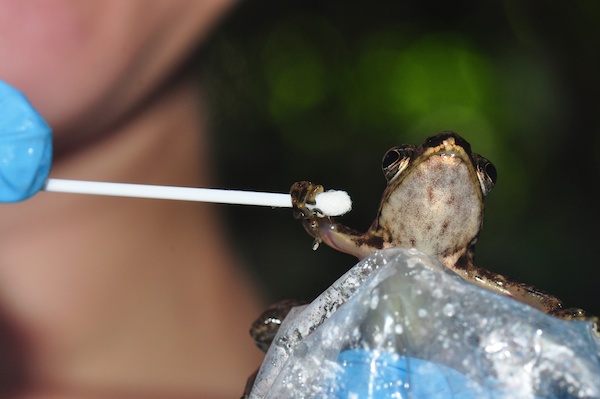 A Mantidactylus majori frog is getting swabbed to test for the presence of chytrid fungus. Photo courtesy of Jonathan Kolby.

Until now, Madagascar has remained unscathed by Batrachochytrium dendrobatidis, commonly called Bd or chytrid. Originally traced back to worldwide exports of chytrid-carrying African clawed frogs in the first half of the 20th century, the fungus has since leapfrogged around the world. Amphibians have tested positive for Bd in 56 of the 82 countries surveyed so far. Experts estimate that more than 200 species have gone extinct after these fungal outbreaks.

Amphibians pick up the fungus from contaminated water supplies or skin-to-skin contact with other infected animals. The zoospores – the free-living infectious form of the fungus – attack a frog’s skin, making it thicken and slough off. The thickened skin makes it hard for afflicted amphibians to breathe or keep a healthy balance of fluid in their bodies. The frogs can quickly dehydrate, suffer cardiac arrest, and die. Yet, the disease doesn’t sicken all frogs. Some species don’t show any ill effects, but they can act as reservoirs that allow the infection to persist, as well as carry the fungus to new areas.

In a way, conservationists have been waiting for bad news like this.

“We already suspected that this could happen,” said Franco Andreone, chair of the Madagascar Amphibian Specialist Group. “Because the pet trade turned out to be among the easiest channels through which Bd spreads, [Kolby] had the good chance to detect chytrid in exported animals.”

To find evidence of the disease, Kolby searched for fungal DNA on skin swabs from 565 amphibians, representing nine different frog species that were exported from Madagascar directly to the U.S. He specifically chose ones that came from habitats that would be most hospitable to the fungus. 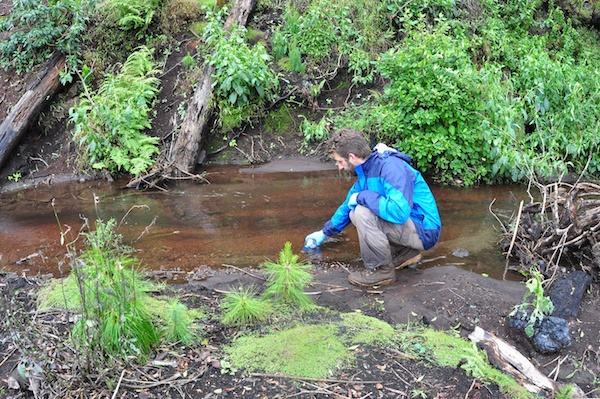 Jonathan Kolby in the field, collecting water samples to check for the presence of amphibian pathogens in Ankaratra. Photo courtesy of Jonathan Kolby.

Three frogs in Kolby’s study tested positive for the chytrid fungus. But only one – a Betsileo reed frog (Heterixalus betsileo) – showed fungal DNA in three separate tests. Usually only one analysis is run for this type of test, but Kolby wanted to be certain of his results. So after an initial test – run in triplicate – any positive samples were subjected to another round of testing. If samples from the second test came back positive, then a third round was run. Although two other frogs – a Scaphiophryne spinosa and a starry night reed frog (Heterixalus alboguttatus) – tested as positive after the first two rounds but not the third, Kolby also reported those as Bd-infected samples.

Even one positive test has serious implications. Previous field studies have never confirmed Bd in a frog from Madagascar. And none of the animals with positive tests in Kolby’s study showed any outward signs of sickness, highlighting the importance of surveillance to find this fungal disease.

Right now there aren’t any required protocols to check commercial amphibian shipments for the presence of Bd. However, according to Kolby, the U.S. Fish and Wildlife Service is considering a petition submitted by Defenders of Wildlife, which calls for such policies to be developed.

While the pet-trade presents an efficient and cost-effective monitoring opportunity, the method does have some drawbacks. The frogs may not have been collected from sites that accurately reflect which species are affected in the wild, said Kolby. Also, although he took many precautions to avoid contamination of his samples, the frogs were tested after they left the country. Because of this, there is a chance that contamination from outside sources of Bd could have occurred during travel. For animals warehoused with species taken from other countries before shipping out to their final destination, there might be many more chances of inadvertent contamination.

According to Kolby, his evidence isn’t yet “irrefutable.” But the stakes are high if the fungus becomes established in susceptible frog populations. His research results indicate the need for stepped-up surveillance in Madagascar. He recommends targeting the collection and testing of larva and subadults, which are more susceptible to infection than are adult frogs. 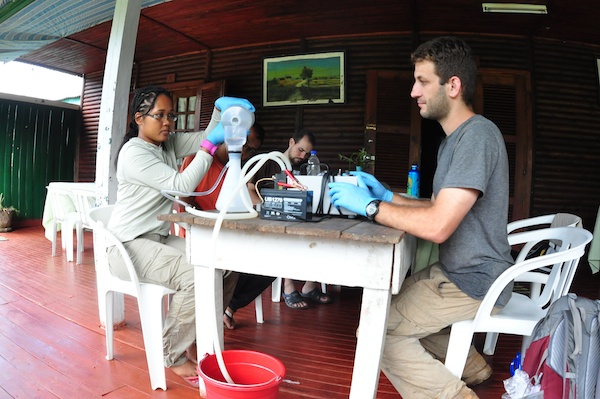 Even before these positive test results were reported, conservationists had been keeping close tabs on the Madagascar’s amphibians.

“Chytrid has always been one of the first priorities in the conservation actions within Madagascar’s national action plan, named the ‘Sahonagasy Action Plan,’” said Andreone, referring to plans developed as a result of an ACSAM (A Conservation Strategy for the Amphibians of Madagascar) workshop held in Madagascar eight years ago.

Among other steps, the action plan prompted routine sampling of frogs from eight sites across the island. In addition, there are now captive breeding programs set up at the Mitsinjo Center in Andasibe and at the Ivoloina Zoological Park in Toamasina; if there is a fungal outbreak, they will already know how to breed and care for some of these frogs. In addition, scientists are working out how to use bacteria to prevent chytrid from taking hold in the first place. Tests on some amphibians show that bathing them in certain bacteria before they become exposed to the fungus can prevent the disease. However, it remains to be seen whether this probiotic approach could be a feasible large-scale strategy that doesn’t cause unexpected problems in other parts of the ecosystem.

Kolby is back in the field now, working with the Cellule d’Urgence Chytride Madagascar (Chytrid Emergency Cell) to quickly confirm and identify the presence and distribution of Bd in wild amphibian populations in Madagascar. He’s testing water sources for the fungus, too. That way if more frogs turn up with positive tests, then researchers can start to map out how the disease may be moving around.

“Early detection now provides the opportunity to interrupt pathogen establishment,” Kolby said. “But if not acted upon with haste, disease-associated ecological decline in Madagascar may soon become inescapable.” 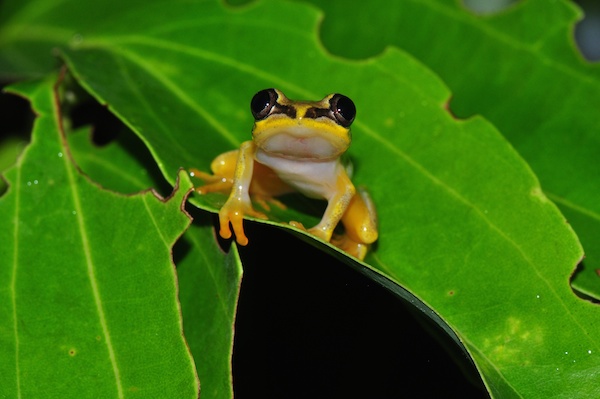 (11/04/2013) A breeding population of a critically endangered harlequin toad thought to be extinct in Costa Rica has been discovered in a tract of highland forest in the Central American country, reports a paper published in Amphibia-Reptilia. Atelopus varius, an orange-and-black harlequin toad, was once relatively common from central Costa Rica to western Panama. But beginning in the 1980’s the species experienced a rapid population collapse across most of its range.

(10/22/2013) In 2004, the first-ever Global Amphibian Assessment (GAA) reviewed all 5,743 amphibian species known to science and concluded that 32% were threatened with extinction – a number far exceeding corresponding figures for birds and mammals (12 to 23% respectively). In addition to the usual culprits of climate change and habitat destruction, a startling 92.5% of amphibians listed as Critically Endangered were found to be undergoing enigmatic declines linked to an unexpected perpetrator – the chytrid fungus, Batrachochytrium dendrobatidis (Bd).