Those eyes look human: could anthropomorphism be used for conservation?

It’s easier to relate to someone you have something in common with; that feeling of connection can turn strangers into friends. And if those strangers belong to an entirely different species, then attributing human qualities to that species – a process called anthropomorphism – may aid conservation efforts by attracting public attention and funding resources. Charismatic species such as dolphins, pandas and chimpanzees are most often tagged with human types of traits. However, in a paper published in Biodiversity Conservation, a group of conservationists makes the case that the wallflowers of wildlife – the “less attractive” species – could also be helped through anthropomorphism.

According to the researchers, anthropomorphism is an important way in which people make sense of their interactions with the non-human world. When there is a sense of connection, there is often a stronger commitment to conservation. However, scientists have long been wary of anthropomorphism because it was seen as leading to unscientific hypotheses about animal behavior, according to co-author Meredith Root-Bernstein from the University of Oxford.

“I take a utilitarian view,” Root-Bernstein told mongabay.com. “I think the question is: what is the anthropomorphization for? What do you want to communicate with it?”

There isn’t one set definition of anthropomorphism. The human qualities attributed to animals are on a sliding scale of intensity. It could take the form of making images of animals with more human-like features, such as rounded eyes that face forward. Or it might include giving animals emotions that people experience, such as happiness or sadness. Depicting animals wearing human clothes or engaging in human activities also evokes human feelings of empathy, something the entertainment industry has long taken advantage of in films such as “Every Which Way But Loose,” a 1978 adventure movie starring Clint Eastwood and his orangutan sidekick, “Clyde.”

“The way to use anthropomorphism depends on the audience and the circumstances,” Root-Bernstein said. “In zoos, for example, one often gets the opportunity to see animals doing things that are part of their daily routines, which can be compared to human daily activities like schedules, chores and mealtimes.”

According to Root-Bernstein, this kind of anthropomorphism might make it easier to communicate the experience of being another species. Zoos traditionally use gift store items such as stuffed animal toys as a kind of take-home outreach, as these toys can elicit empathy by integrating human and non-human features. A previous study published in Ecopsychology found exhibits that made more comparisons to humans tended to evoke higher ratings of support for helping animals. 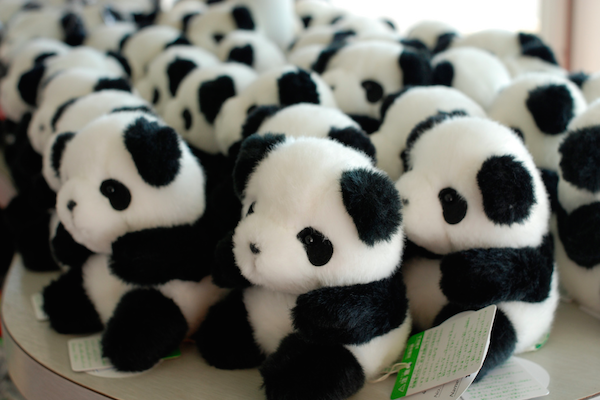 Pandas have round eyes and faces, which are features that help humans feel a stronger sense of connection with them. Photo by: Shintaro Kakutani.

“But just because we can use it – should we?” said Kim-Pong Tam, a social scientist at the Hong Kong University of Science and Technology whose research has shown that anthropomorphism fosters conservation behavior by enhancing a person’s sense of connection to nature.

The effects of anthropomorphism aren’t always beneficial. In Japan, thousands of raccoons were imported for the pet trade in the 1970s after a cartoon series made the bandit-faced animals popular. When the raccoons acted like the wild animals they were instead of cute, well-behaved cartoon characters, many disenchanted owners sent them packing. The sudden release of non-native raccoons into the outdoors resulted in an expensive, nationwide eradication program that failed to rid the island of this invasive species. Since then, raccoons have spread throughout Japan, causing significant damage to crops and ancient temples.

Another unintended consequence of anthropomorphism can arise when empathy for individual animals doesn’t generalize to a whole species. This can create conflicts in zoos where breeding programs or budgets require culling of animals, a situation that recently sparked public outcry when a young giraffe was euthanized due to a surplus in its herd at the Copenhagen zoo.

The status of flagship or mascot animals can also cause less favor to fall upon other species. For example, when the imperial parrot (Amazona imperialis) became the national bird of the Caribbean island of Dominica, it also became associated with style and sophistication while its sister species, the red-necked parrot (Amazona arausiaca), came to be seen as an undeserving competitor. The disparity in status between the birds led to poorer conservation efforts for the less-exalted bird. In anthropomorphic terms, you could call it the “ugly stepsister effect. ”

“We aren’t saying you shouldn’t be cautious about using anthropomorphism,” Root-Bernstein said. “We are saying that the more you know about it, the better you can use it.” She hopes the researchers’ work will help conservationists understand why they might want to use different forms of anthropomorphism in different circumstances, and how to choose between types of anthropomorphism more deliberately.

“I’m all ‘yes’ about the use of anthropomorphism for conservation,” said Will Turner, chief scientist for Conservation International. “To me the issue isn’t so much about conveying that animals have human qualities so much as it is about using the human lens to help people relate to other species in the first place. Even the most empathetic among us has to use a human lens.”

(06/11/2013) Borneo is a vast tropical island known for orangutans, rhinos, elephants, sun bears, proboscis monkeys, hornbills, and ubiquitous leeches. Conservationists have championed all of these species (aside from the leeches) in one way or another, but like many tropical regions Borneo’s freshwater species have long been neglected, despite their rich biodiversity and importance to local people. But a new organization, the Kinabatangan River Spirit Initiative, is working to change that.

(05/21/2013) Drawing from her personal experience as a primate educator and the challenges she saw others facing, Amy Clanin envisioned a network that would advance the field of primate conservation education by addressing three needs of educators: connections, resources, and services. It was this vision that led her to create the Primate Education Network (PEN). PEN is at the forefront of primate conservation education, providing a community and collaboration platform for primate educators.