The fungus among us: scientists discover a big player in the global carbon cycle

Carbon counters trying to keep tabs on the rising concentration of carbon dioxide in our atmosphere may have missed an important factor for their estimates: fungus. It turns out that when plants partner up with certain types of fungi, they can store up to 70 percent more carbon in the soil according to a paper published last month in Nature by Colin Averill and scientists at the Smithsonian Tropical Research Institute. Since soil contains more carbon than the atmosphere and vegetation combined, the ability of fungi to file away so much carbon could have huge implications for the global carbon cycle.

“These findings will help to refine Earth-system models and promote debate on the extent to which soil microbes influence the global carbon cycle,” said research colleague Benjamin Turner.

Accurately tracking the global carbon cycle is critical now that human activities add more carbon to the atmosphere than the natural world can absorb. Before concentrations of carbon dioxide started hitting new highs, levels were balanced by the natural movement of carbon through terrestrial and ocean cycles during which it is taken up by plants, stored in sediments or absorbed at the surface of the sea. But these cycles can no longer keep pace with human-caused carbon emissions that are leading to climate change and ocean acidification. Our ability to devise new ways to remove that excess carbon from the atmosphere depends on understanding how and where the carbon is stored. 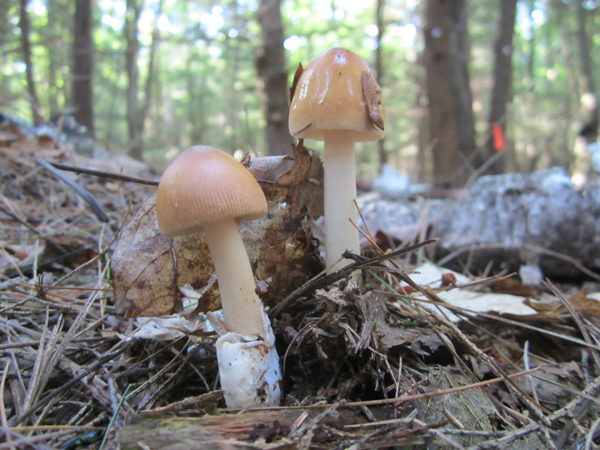 The fungus among us: ectomycorrhizal fruiting bodies (mushrooms) – otherwise known as mushrooms – in the Harvard Forest. Photo credit: Courtesy of Colin Averill

“Even though EEMs are only 15 percent of fungi associated with plants, they represent a lot of the trees on Earth, “Averill said. “North of 50º latitude almost every tree is EEM associated.”

It turns out that ectomycorrhizals, which tend to congregate near the roots of pines, hemlocks, birch, oaks and other plants, have a secret weapon: they possess enzymes capable of breaking down soil nitrogen that the other type of fungi, arbuscular mycorrhizals, lack. That means the EEMs—and the plants or trees they partner with&#8212can suck more nitrogen out of the soil than other fungi. In the process, they shortchange the microbes that need nitrogen to decompose detritus and release carbon back into the atmosphere. So, with EEM fungi around, the plant-based carbon stays in the soil, raising storage capacity and the carbon sink strength of forests.

To study the impact of these fungal forces, Averill and his colleagues analyzed 210 soil samples from all over the world. After adjusting for variables such as temperature, rainfall, the amount of leaf litter available to provide carbon and the carbon-stabilizing effect of clay in the soil, they found that soil with more EEMs had almost twice as much storage capacity per cubic inch than soils that supported more arbuscular fungi.

“These results show the fungi effect is independent of these other known drivers,” Averill said. “Not that these other factors don’t matter. But above and beyond those known drivers, the EEM have an effect that holds up well at the global scale.” 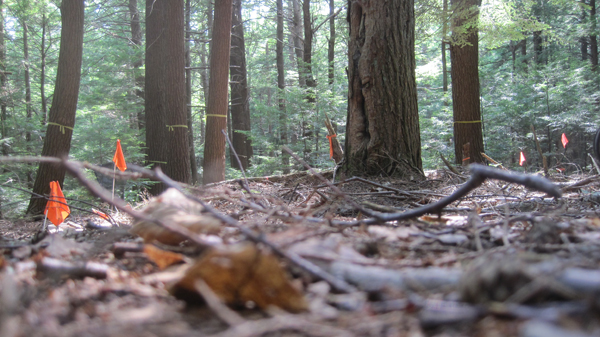 One of Averill’s field sites: The forest floor beneath an old-growth hemlock stand at the Harvard Forest, a 3,000 acre ecological research area located in Petersham, Massachusetts that is owned and managed by Harvard University.
Photo credit: Courtesy of Colin Averill

The idea that fungi can affect carbon cycling isn’t new. Several years ago, when he couldn’t readily explain why free-living decomposers in soil became more active when he kept ectomycorrhizal fungi out of his soil samples, Averill turned up research from the 1970s that suggested that the fungi were inhibiting decomposition. More recently, scientists in the UK and New Zealand provided experimental models that also argued for the ability of EEMs to outcompete soil microbes.

Next, Averill wants to pin specific numbers on the effect of fungi on soil carbon to study how these changes could be worked into ecosystem models.

“What’s the effect on soil carbon storage if these fungi increase by 25 percent?” he said.

By demonstrating these functional links between fungi and carbon storage, Averill and his colleagues gave soil biology an explicit role in the global carbon cycle. They also revealed the far-reaching consequences of the competition for nutrients between plants and soil decomposers.

“This shows that you can’t compartmentalize the carbon cycle by trees, grasses and decomposers,” Averill said. “We need to think holistically about how all these things are connected.”

Why bioluminescent fungi glow in the dark

(06/13/2013) Aristotle (384–322 BC) reported a mysterious light, distinct from fire, emanating from decaying wood. Pliny the Elder (23–79 AD) mentioned feasting on a glowing, sweet fungus found on trees in France and, in the late fifteenth century, a Dutch consul gave accounts of Indonesian peoples using fungal fruits to illuminate forest pathways. Bioluminescent fungi have intrigued generations of observers, and a handful of scientists still carry that torch of curiosity, answering questions about how and why these mushrooms glow.

(03/29/2013) Mycorrhizal mycelium, a common fungi that helps plants uptake nutrients from soils, plays a fundamental role in carbon sequestration by boreal forests, reports a study published in this week’s issue of the journal Science.