The best of the worst: fossil-fuel extractors pave the way for the low-carbon revolution

Commentary by Owen Reynolds on 26 March 2014

At the end of last year, the world got some good news on the green business front concerning a very unlikely set of participants. A recent market review revealed that Exxon Mobil, Chevron, BP, ConocoPhillips, Royal Dutch Shell, Duke Energy, PG&E Corporation, American Electric Power Company, ConAgra Foods and Walmart, among others, are including shadow carbon prices in their forecasts.

This indicates that these hugely-profitable multinational corporations expect that carbon emissions will have a price put on its head soon. Carbon dioxide is the most common greenhouse gas, and consequently, has the largest effect on global warming. And the higher carbon is priced, the more likely companies will be to control and reduce their emissions. So, the more companies find financial reasons to curb their carbon emissions, the lower their global warming impact will be.

But does the grouping above sound familiar? It should. These companies represent some of the most controversial industries in American history. Dominating the oil, gas, electric generation, agriculture and retail industries, each of these behemoths wield unfathomable influence over markets and politics. So, by being financially prepared to fork over large sums of money in order to emit carbon, their influence may have positive consequences.

Carbon can be priced through cap-and-trade credits or carbon taxes. Carbon credits represent one ton of carbon dioxide emissions and are traded in a commodities market similar to grains, cotton or metals. If the limit or cap on carbon emissions is ever-decreasing, then carbon emissions will not only be statically expensive, but increasingly expensive. Carbon-emitting companies will be subjected to ever higher costs, forcing them to find alternative, more environmentally-friendly and cheaper business practices to please shareholders aiming at cost control.

On the other hand, carbon taxes place a cost premium directly on usage. This means, carbon dioxide emitting companies will be encouraged to lower emissions as they pay more for each ton of carbon emitted. Carbon taxes may not, however, limit the quantity of emissions, much as an exorbitant tax on any good will not force a cap. They are also much more difficult to increase over time—taxes are never popular. Though because all nations already tax companies, this route requires very little infrastructural change in comparison to cap-and-trade. However, either method is better than neither and may prove effective at reducing emissions, which continue to rise globally.

Whichever of the two formats these companies employ, they are all actively projecting the integration of what economists call externalities into their financial costs. The major negative externality of fossil fuels is global warming. By pricing it through either cap-and-trade or taxation, some of that damage is being valued at its real, destructive and harmful cost.

This trend signals a real expectation that carbon emissions will be priced to reflect its true cost to our planet’s climatic stability. As participants in the largest carbon emitting industries, the above companies are acknowledging their own historical impacts on the carbon equation. Oil, gas and electric generation account for almost all of the emissions to blame for current, unprecedented global warming. These industries release matter which has been subterraneously sequestered slowly throughout geologic history—a very slow-motion version of the scene in Ghostbusters when the EPA official releases ghosts which had been stored up over time.

Fossil fuel industries also power the global economy, and are single-handedly responsible for the increase in productivity which has afforded at least a portion of humanity its current, rather cushy, standard of living. Because global agricultural and pharmaceutical output is currently dependent on the release of carbon-based energies, halting it completely today would cause a massive loss of life which most would judge as unconscionable. However, quickly—but not immediately—curbing the global addiction to fossil-fueled power will force economic innovation in the search for alternative ways to create power.

As the largest emitters, these companies have the most to lose or gain from projected regulatory changes. If they innovate cheap ways of cutting carbon emissions, then they can sell excess carbon credits to companies who fall short. Those who fall behind the pack will find it increasingly difficult to please investors and will fold. It is evolution of the fittest, leanest business model—and in this rare case, the most environmentally-friendly.

However, the implementation of carbon pricing schemes, itself, is the most complicated factor. Whether there is sufficient political will at the national, much less international, level is uncertain. While companies including carbon costs on their financial statements does prove the expectation that such pricing will have a significant effect, it does not necessarily indicate the catalyst needed at a legislative level. 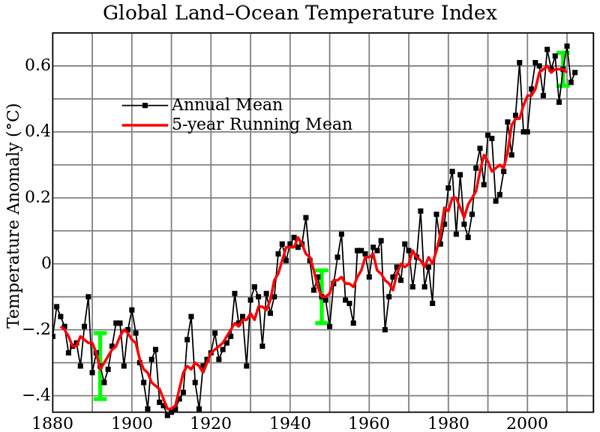 California is out of the gate using carbon credits and 22 other states are trying their hand at various shades of carbon pricing programs. Each one is an experiment at the state level. At the macro level is the Kyoto Protocol, the largely ineffective accord designed to facilitate the international sale of carbon credits. Europe has shown promise under the Protocol, but has yet to effectively link up with the world market. Australia even revoked its legislative framework for carbon credit marketing and will attempt to limit carbon emissions through other means.

As an under-developed market still in the beta test phase, the outcomes of carbon pricing and carbon credits is anyone’s guess. This uncertainty is reflected in the variation of estimates that these companies are using, which range from $5 to $60. Nations, international organizations and companies alike are attempting to integrate their expectations into business models the best they can.

Because the companies above have so much at stake over the issue, it should be no surprise they are front runners in including carbon prices in their forecasts. Those who weather the storm and still turn a profit will pave the way for industries further down the carbon ladder. Fossil fuel production is the core source of energy which powers daily life. As nearly all other industries depend on those companies, they too will eventually make the requisite adjustments, incorporating carbon prices as any other commodity in their production process. The trials and tribulations that these companies face will set the stage to accommodate a more realistic cost for carbon.

While it is doubtful that any of the companies mentioned are happy about the proposed obstacles, it is apparent that they are preparing for them. They have put together the tinder for a bonfire of environmentally-friendly business practices, even though cohesive legislation has yet to be developed to light it. However, the true cost of carbon emissions and consequent global warming is becoming more apparent. When even extractive industries, themselves, prepare for that cost to be integrated as just another cost of doing business, the change may well be institutionalized.