Revealed for the first time: the surprising biodiversity of algae ‘reefs’

Most people are familiar with coral reefs, but very few have ever heard of their algal equivalent – rhodolith beds. Yet, these structures provide crucial habitat for many marine species. In the first study of its kind, published in mongabay.com’s Tropical Conservation Science, researchers unveil just how important these beds are for bottom-dwelling organisms, and the species that depend on them.

Superficially similar to coral, rhodoliths are made up of various kinds of photosynthetic red algae (Corallinaceae and Rhodophyta species) that form hard structures as they grow. They drift along with the currents, gradually accumulating calcium carbonate in their cells, until they get too heavy for water to move them. They settle on the sea bottom, increasing in size and intersecting with other rhodoliths to form vast, brightly colored fields on the ocean floor. These fields, or beds, are found throughout the world’s oceans, from the warm waters of Mexico to the Greenland Arctic. Fossil evidence indicates that rhodoliths have been around for at least 55 million years.

Rhodolith beds hold a key role in many marine ecosystems by “terraforming” otherwise sandy, barren areas. Their rigid structures and crevices provide habitat for many kinds of invertebrates such as sea urchins, shrimp and mollusks, which in turn provide food sources for organisms higher up the food web. Rhodolith beds also directly affect commercial industries such as sea urchin and shrimp fisheries.

“Rhodolith beds have been shown to be of great ecological importance to the marine environment, providing a variety of ecological services,” the study states. “They provide a range of microhabitats for their associated fauna and flora, are good indicators of environmental conditions of the ecosystem which they inhabit, protect the associated fauna… and help maintain the pH of the sea.”

Yet, rhodoliths have attracted very little research attention. To fill this gap and determine just how important they are, a team of researchers from various institutions in Brazil examined the vast rhodolith beds off the Brazilian coast. They looked at the composition, abundance and diversity of echinoderms – sea urchins, starfish, brittle stars, etc. – living on rhodolith beds in comparison to other kinds of habitat.

This study marks the first-ever attempt to assess the relationship between rhodoliths and echinoderms, and the researchers came away with some surprising results. Not only did they find more species of echinoderms living on rhodolith beds than on looser substrates such as sand, they found that sea urchins may even prefer rhodoliths over coral reef, long regarded as the ocean’s bastion of biodiversity. In addition, the researchers also discovered numerous juveniles of two threatened starfish species (Echinaster (Otilia) echinophrus and E. (O.) brasiliensis) living on rhodolith beds, indicating that this type of habitat may function as an echinoderm nursery. 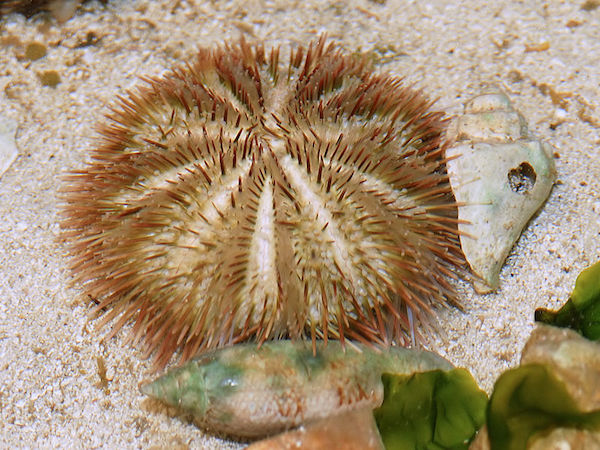 Lytechinus variegatus, one of the sea urchin species surveyed in the study. Photo by: Hans Hillewaert via Creative Commons Attribution-Share Alike 3.0.

While they have a strong, rock-like appearance, rhodoliths are relatively fragile and easily disturbed by human activities. Since they produce energy through photosynthesis, rhodoliths are typically found in shallow water environments particularly prone to human impact. Beds are often devastated by trawling, a commercial fishing practice in which a large, heavy net is dragged along the bottom. Rhodoliths are even directly harvested for the limestone industry.

However, despite their ecological importance and the threats facing them, rhodoliths are offered little protection. In fact, Brazil currently excludes its rhodolith beds from habitat conservation initiatives. In their study, the researchers urge greater protection for rhodoliths around the world.

“Besides their importance as providers of structural complexity to the continental shelf, rhodolith beds support a rich biodiversity that includes organisms with recognized potential for [medicinal and other human uses],” the authors write.

“Thus, these areas need to be urgently prioritized in research programs and initiatives for maintaining their physical integrity, ecological balance and conservation of their associated biodiversity.”

(09/13/2013) From massive hotel development through the agriculture industry, humans are destroying the second largest barrier reef in the world: the Mesoamerican Reef. Although global climate change and its effects on reefs via warming and acidification of coastal waters have made recent headlines, local human activities may destroy certain ecosystems before climate change has a chance to do it. The harmful effects of mining, agriculture, commercial development, and fishing in coastal regions have already damaged more than two-thirds of reefs across the Caribbean, in addition to worsening the negative effects of climate change.

Finding a needle in a haystack: two new species of octocorals discovered in the Pacific Ocean

(08/20/2013) You can now visit up-close and personal some of the world’s most imperiled ecosystems on Google Earth: coral reefs. The Google team is working with scientists to provide 360 degree panoramas, similar to Google street-view, to give armchair ecologists a chance to experience the most biodiverse ecosystems under the waves.

(06/22/2013) A world heritage site in the Solomon Islands is ‘in danger’ due to logging, warns the United Nations Educational, Scientific and Cultural Organization (UNESCO).