Researchers use new technique to shed light on endangered tapir

Tapirs are notorious for being one of the most elusive animals in Central America. Despite their relatively large size and distinctive appearance, these stocky creatures are seldom seen by human eyes. Because of this, very little is known for certain about their behavior or the sizes of their populations.

A new study, recently published in mongabay.com’s open access journal, Tropical Conservation Science, uses a new technique to examine the behavior and distribution of Baird’s tapir (Tapirus bairdii) in the southern forests of Mexico. One of four species of Central American tapir, Baird’s tapir – currently listed as Endangered and named after the famous American naturalist Spencer Fullerton Baird – was recently ranked 34th on a list of 4,000 at-risk animals in need of urgent protection by the Zoological Society of London. According to the International Union for the Conservation of Nature (IUCN), its population has halved in the last 30 years due to illegal hunting and loss of habitat. 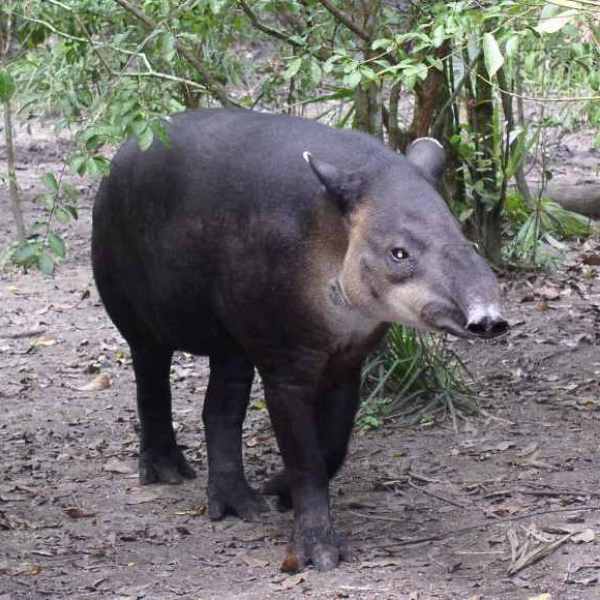 In December of 2010, a team consisting of researchers from the National Autonomous University of Mexico (UNAM) and the University of Michoacan of San Nicolas de Hidalgo, set up 25 camera trapping stations in the Biosphere Reserve of El Triunfo, a mountainous area thought to contain some of Mexico’s most diverse habitats, at a wide range of altitudes. The cameras were then checked at regular intervals for the next six months.

Researchers believed that camera-traps would be the most effective way to gauge information about behavior and population because tapirs tend to avoid humans and usually leave an area when they hear people approaching. The team decided to use a method known as the Random Encounter Model (REM) to estimate the density of population. In this case, REM involved positioning the cameras in multiple locations 500 meters (1,640 feet) apart from each other, instead of simply placing cameras at locations the animals are known to frequent, such as waterholes. Once the traps were set up and photographs started coming in, the researchers examined the frequency of those that captured tapirs. After factoring in the geography of the area and the average speed of a tapir, they found the approximate tapir density of the area to be 0.12 animals per square kilometer (0.31 per square mile). This figure suggests that Baird’s tapir remains relatively elusive. Each camera caught sight of a tapir, roughly, only once every 100 days.

The technique of REM is still fairly new and is in the process of being developed and adjusted by zoologists and conservations around the world. However, by placing cameras at different altitudes and noting the times at which they recorded activity, the team learned that tapirs are more common at mid-altitudes and that they tend to be most active at dawn and dusk. Researchers studying tapirs in Costa Rica have made similar findings, which also suggest that increased availability of shelter and a greater variety of food might be what make mid-altitude habitats appealing to tapirs.

Camera traps have proved to be valuable tools for those trying to study and protect the world’s most secretive forest species. While REM has yet to be perfected, its potential to unveil some of the rainforest’s deepest and darkest secrets may continue to prove very useful to conservation efforts.