Next big idea in forest conservation? Quantifying the cost of forest degradation Pasture meets gallery forest in the Brazilian Amazon. Photo by: Rhett A. Butler.

How much is a forest really worth? And what is the cost of forest degradation? These values are difficult to estimate, but according to Dr. Phillip Fearnside, we need to do a better job.

For nearly forty years, Fearnside has lived in Amazonia doing ecological research, looking at the value of forests in terms of environmental or ecosystem services such as carbon storage, water cycling, and biodiversity preservation. Fearnside then works to convert these services into a basis for sustainable development for rural populations.

“The idea of ‘environmental services’ was certainly radical and innovative when this started out, but now it is a household word. Nevertheless, there is a long way to go before this substitutes for forest destruction here,” Fearnside told mongabay.com.

Fearnside also feels we need to improve our ability to estimate forest degradation. Degradation, or the gradual destruction of forests caused by edge effects, climate change, and infrastructure projects has received less attention from scientific and environmental groups than outright deforestation.

To this end Fearnside says one area that has received too much attention and funding is restoring degraded lands over avoiding deforestation in the first place.

“The advantage of recuperating degraded areas is that everyone is in favor of it, whereas avoiding deforestation must buck powerful economic interests…The financial cost of recuperating a hectare of degraded land is much higher than the cost of avoiding the loss of a hectare of native forest, and the benefit in terms of biodiversity, water and carbon is much less.”

Currently, Fearnside is a permanent resident of Brazil and a research professor at the National Institute for Research in Amazonia.

AN INTERVIEW WITH DR. PHILLIP FEARNSIDE

Phillip Fearnside: I am a research professor at INPA (National Institute for Research in Amazonia) in Manaus, Amazonas, Brazil. I am an ecologist with a PhD is in biological sciences from the University of Michigan advised by Dan Janzen and John Vandermeer. The thesis was on estimation of human carrying capacity on Brazil’s Transamazon Highway.

Phillip Fearnside: I have been in Brazilian Amazonia for 38 years (two on the Transamazon Highway plus 36 at INPA). Before that I worked on reservoirs in India for two years. I have also published on shorter studies in China, Indonesia and Peru.

Phillip Fearnside: For almost three decades now my work has been organized around making the value of the environmental services of Amazonia into an alternative basis to support the rural population here. The idea of “environmental services” was certainly radical and innovative when this started out, but now it is a household word. Nevertheless, there is a long way to go before this substitutes for forest destruction here. I am head of one of Brazil’s “national institutes of science and technology”(which are really big projects rather than an institutions) titled “Environmental Services of Amazonia.” This involves estimating the environmental costs of forest destruction (and thereby the value of avoiding it). Most of the data relates to greenhouse-gas emissions, but the costs involve other services such as water cycling and biodiversity maintenance. Modeling the impact of major infrastructure projects, such as highways and dams, is part of this, as well as the benefits of creating and maintaining various kinds of protected areas.

Phillip Fearnside: Much more attention needs to be given to forest degradation, as by logging, fires and edge effects. Almost everyone (including myself) has been concentrating on outright deforestation instead.

The ability to estimate the effect of specific infrastructure projects and policy decisions is essential. Most of what has been done on deforestation deals with region-wide trends, but it is the effect of specific projects that counts most. Politicians and decision makers may be all in favor of reducing deforestation in general, but when it comes to foregoing a specific highway or dam the reaction is very different!

Work needs to be done to clear up the conflicting estimates of the level of threat that climate change poses to Amazon forest. Models agree that Amazonia will be hotter and drier and that the air will have more CO2, but how this will affect the forest is not a matter of agreement. The consequences of getting it wrong could be substantial.

Mongabay: In regards to conservation, is there anything you feel is NOT working (or not working well) that continues to get a lot of attention and support? 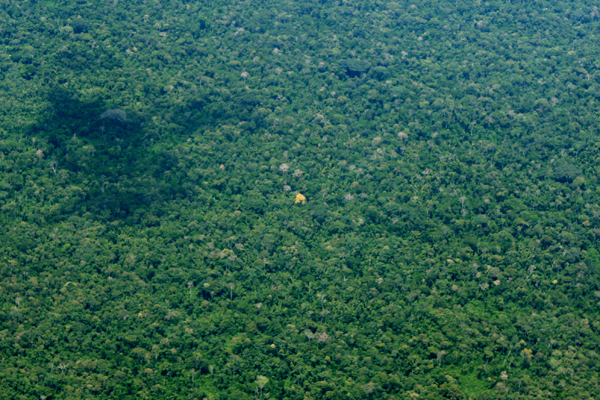 Aerial view of the Amazon rainforest in Ecuador. Photo by: Jeremy Hance.

Phillip Fearnside: Recuperating degraded areas in Amazonia fits this description. The advantage of recuperating degraded areas is that everyone is in favor of it, whereas avoiding deforestation must buck powerful economic interests. Opportunities to create protected areas are quickly disappearing because the difficulty of creating these areas increases rapidly as human occupation advances. The financial cost of recuperating a hectare of degraded land is much higher than the cost of avoiding the loss of a hectare of native forest, and the benefit in terms of biodiversity, water and carbon is much less. Since the funds available for environmental actions are always limited and insufficient, money spent on recuperating degraded lands implies less for avoiding deforestation.

(03/21/2014) Dr. Kinari Webb has a superpower: the ability to provide high-quality health care in a remote and rural landscape. And she uses her power not only to save lives, but also to protect the remaining Bornean rainforests. Twenty-one years ago, Kinari Webb traveled to Borneo to work with orangutans. She witnessed the faltering health of both the people and the environment and saw that the two issues were inseparable. When families must choose between the health of their children and the health of the forest that supports them, everyone loses. But in the region of Gunung Palung National Park — where an estimated 10 percent of the world’s orangutans live — illegal logging and slash and burn farming methods paid the bills and locals saw few alternatives. Kinari vowed to study medicine and return with more to offer.

(03/12/2014) A new online tool, dubbed ForestDefender, aims to help indigenous people understand and implement their rights in regard to forests. The database, developed by the Center for International Environmental Law (CIEL), brings together vast amounts of legal information—both national and international—on over 50 countries.

(03/07/2014) Is it possible to equitably divide the planet’s resources between human and non-human societies? Can we ensure prosperity and rights both to people and to the ecosystems on which they rely? In the island archipelago of Indonesia, these questions become more pressing as the unique ecosystems of this global biodiversity hotspot continue to rapidly vanish in the wake of land conversion (mostly due to palm oil, poor forest management and corruption. For 22 years, Dr. Erik Meijaard has worked in Indonesia. Now, from his home office in the capitol city, Jakarta, he runs the terrestrial branch of an independent conservation consultancy, People and Nature Consulting International (PNCI).

(03/04/2014) Europe is failing to fully enforce its one-year-old EU Timber Regulation (EUTR), alleges Greenpeace, with illegally-logged wood still slipping into the continent, especially from the Democratic Republic of Congo (DRC).

(03/03/2014) In the Western Amazon—arguably the world’s most biodiverse region—scientists have found that not only is the forest super-rich in species, but also in chemicals. Climbing into the canopy of thousands of trees across 19 different forests in the region—from the lowland Amazon to high Andean cloud forests—the researchers sampled chemical signatures from canopy leaves and were surprised by the levels of diversity uncovered.