Logging giant suspends operations to fend off plantations from fires 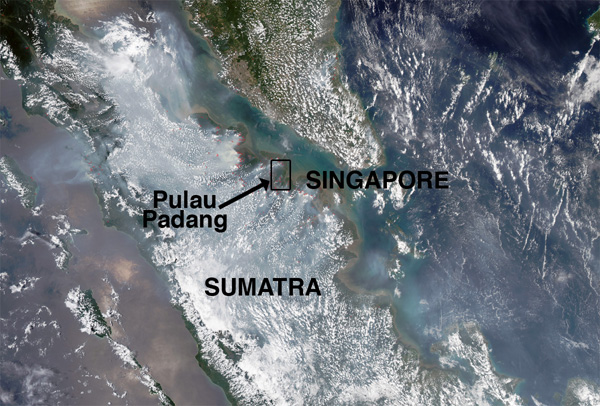 Indonesian Pulp & paper giant Asia Pacific Resources International Limited (APRIL) says it has suspended operations at a concession in Riau Province in order to shift staff toward fighting back fires that threaten its plantations.

In a statement issued Friday, APRIL said its plantations on Pulau Padang, a peat island off the coast of Sumatra, are at risk due to fires illegally set outside its concessions.

“The fires are starting outside our forest concessions but with the heavy, circular winds, they’re jumping everywhere,” said Kusnan Rahmin, President Director of APRIL’s Indonesia operations, in a statement. “If we can’t stop these fires, we will lose company assets.”

APRIL says it has already lost 400 hectares since January to fires. The company adds that it has a strict no burn policy.

Yet, APRIL’s forest management practices have likely increased the risk to its operations. Like other plantation companies operating in the coastal lowlands of Riau, APRIL has dug an extensive network of canals to drain peatlands in order the lower the water table to grow acacia trees. During the dry season, these areas are highly vulnerable to burning. Once ignited peat fires are extremely difficult to extinguish and generate massive air pollution that contributes to the choking haze now blanketing much of Sumatra. 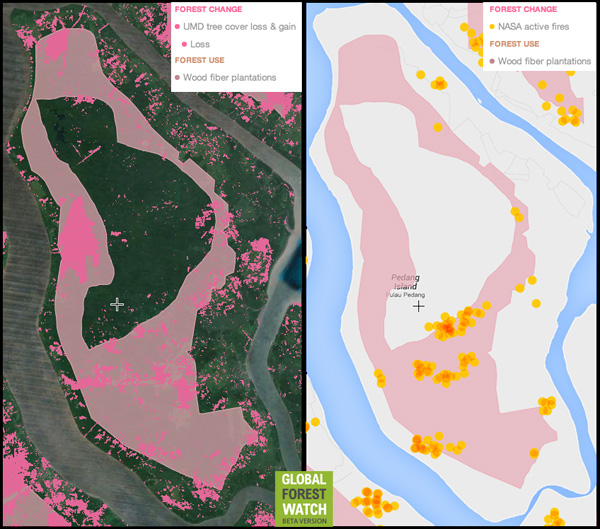 According to Global Forest Watch, Pulau Padang lost 10,000 hectares of forest, representing about 9 percent of its land mass, between 2000 and 2012.

APRIL says that 130 field staff have been transferred from forestry operations to augment its 600-person firefighting team. Planting and harvesting activities on Pulau Padang have been halted in the meantime.

APRIL has been heavily criticized by environmentalists for its forest management practices, which include large-scale destruction of rainforests, drainage of peatlands, and conflict with local communities. Unlike its biggest rival, Asia Pulp & Paper (APP), which a year ago established a moratorium on forest conversion, the company continues to source fiber from natural forests.

But APRIL recently moved to improve its forest policies, committing to preserve high conservation value areas and phase deforestation out of its supply chain by 2019. While greens say the commitment falls short of APP’s policy, several groups have welcomed it as a step toward more responsible forest management and are encouraged that the two forestry giants now seem to be competing over their environmental pledges, rather than their rate of natural forest conversion.

In contrast to APP, which sells substantial amounts of paper and packaging products to consumer-facing companies, APRIL is primarily in the pulp business, selling woodpulp mostly to paper mills in India, China, and South Korea. A small portion of its product goes into making rayon, which is used in clothing manufacturing.