Just days before Myanmar, also known as Burma, implements a ban on exporting raw logs, the Environmental Investigative Agency (EIA) has released a new report that captures the sheer scale of the country’s illegal logging crisis. According to the EIA, new data shows that 72 percent of logs exported from Myanmar between 2000-2013 were illegally harvested.

“The forestry sector is in crisis [in Myanmar]. Logging is rampant, transparency non-existent. Drivers include consumers’ need for cheap raw materials in the form of logs and in particular Myanmar’s precious hardwoods,” EIA Forest Campaign Leader, Faith Doherty, told mongabay.com, adding “this situation is acknowledged by the government and we hope that support for reform in the forestry sector from the international community becomes a reality.”

Analyzing new figures released by Myanmar’s Ministry of Environmental Conservation and Forestry and published by the country’s Eleven Media group, the EIA found that official export data accounted for only 28 percent of logs imported into other countries. This means, the rest—over three-fourths of the total—was likely illegally logged and exported. In all, 22.8 million cubic meters of logs were imported to various countries around the world from Myanmar during the period in question. 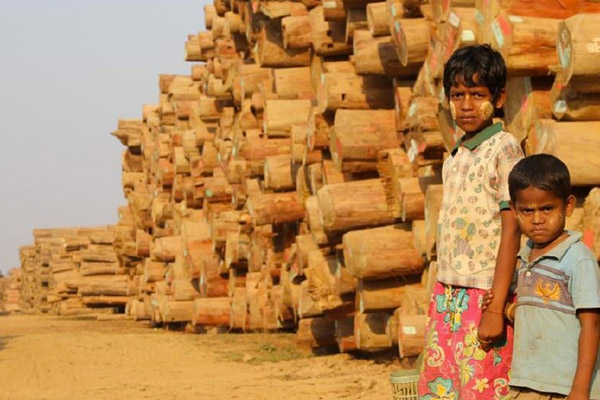 Illegal logging is rampant in Myanmar. Photo courtesy of the EIA.

“Data of this kind has not been published before; lack of transparency remains a major concern in Myanmar and the country still does not report trade data to mainstream global bodies such as the United Nations,” reads the EIA briefing Data Corruption: Exposing the True Scale of Logging in Myanmar.

Illegal logging is a global scourge, accounting for some 15-30 percent of deforestation in the tropics and worth an estimated $30-$100 billion in ill-gotten gains annually. Not only does the practice devastate forests, harm biodiversity, and emit carbon, but it also imperils forest communities and robs developing countries of revenue. In Myanmar’s case, the EIA estimates that the country lost out on $6 billion in revenue over the 14 year period, four times the country’s health and education budget during 2013-2014.

Myanmar is hoping its new ban on exporting raw logs, which is set to begin April 1st, will allow the country to regain some control over its forestry sector. However, Faith Doherty says the ban is only one piece of the puzzle.

“A ban is only as good as the enforcement that governs it,” Doherty said, adding that Myanmar’s biggest importers will need to step up as well.

Graph showing discrepancy between government logging figures and imports into other countries. Graph courtesy of the EIA.

“We would like to see the countries that benefit from [Myanmar’s] logs to reciprocate in that they would enact log import bans from Myanmar—countries such as China, India, Thailand and Vietnam.”

To date, Myanmar’s government has largely blamed its illegal logging crisis on self-regulating ethnic areas, particularly the state of Kachin which runs a notorious logging trade route into China. However, the EIA says the data doesn’t point to Kachin as the sole source of illegal logging. Instead the data “reveals chronic levels of unlicensed logging and timber smuggling throughout Myanmar—a problem which is by no means confined to ethnic areas.”

The scale of the problem should put buyers on notice, according to the EIA. More and more countries—including the U.S., the EU, and Australia—have implemented laws that outlaw trading in wood products illegally logged abroad.

“Purchasing timber from Myanmar is extremely high risk,” added Doherty. “The Government of Myanmar have indicated that they want to enter into negotiations with the EU through the Forest Law Enforcement Governance and Trade (FLEGT) initiative—this is very useful in that transparency and verification that is independent will be at the heart of reform desperately…In the meantime consuming nations need to ask the Myanmar Government for verified information that the timber they are purchasing is indeed legal. It is not good enough to accept government issued documents.”

Myanmar is a part of the Indo-Burma biodiversity hotspot, which was dubbed by Conservation International (CI) as the world’s most imperiled hotspot in 2011. At that time, CI estimated that only 5 percent of the ecosystem remained. Between 1990-2005, Myanmar lost 17.8 percent of its forest cover, according to FAO data.

(10/04/2013) For decades, one of Southeast Asia’s largest countries has also been its most mysterious. Now, emerging from years of political and economic isolation, its shift towards democracy means that Myanmar is opening up to the rest of the world. Myanmar forms part of the Indo-Burma biodiversity hotspot, and some of the largest tracts of intact habitat in the hotspot can be found here.