by Mrinalini Erkenswick Watsa on 25 March 2014

When Europeans first arrived in North America, they exterminated three to five billion passenger pigeons (Ectopistes migratorius) in the short span of a century through a combination of habitat destruction and hunting. In 1914, the last living passenger pigeon perished at the Cincinnati Zoo. Despite the staggering scale of this extinction event, three species of vulture from Southeastern Asia retain the dubious distinction of having had the most rapid population crash of any avian fauna. They might not have begun with numbers as large as the passenger pigeon, but within the space of a single decade, their populations were reduced by 96 to 99 percent.

The scientific world argued in vain over the cause of this dramatic decline, suspecting an undocumented, lethal, and highly infectious virus. When the mystery was finally solved in 2006—to nearly everybody’s surprise—the cause was a single drug, diclofenac, often prescribed to subdue cattle. Subsequently, veterinarians were banned from prescribing it to farmers across the subcontinent. Despite these events and in the face of such evidence, the EU has just sanctioned diclofenac for use by veterinarians across the European Union. According to local conservation groups, European vultures could very well be the next victims of a massive extermination and extinction event.

“It is shocking,” José Tavares, the Director of the Vulture Conservation Foundation, told Birdlife International, “that a drug that has already wiped out wildlife on a massive scale in Asia is now put on the market in crucial countries for vulture conservation such as Spain and Italy, especially as the total ban on Diclofenac in India has produced the first signs of recovery in Indian vultures.”

Diclofenac kills: the evidence from India

The story of diclofenac’s use in India, Nepal, and Pakistan is testament to the importance of ecological impact assessments for drugs prescribed by both doctors and veterinarians. Surveys of populations of white-rumped vultures (Gyps bengalensis) in India indicate a drop of 99.9 percent from 1991 to 2007, with corresponding reductions of 96.8 percent in the Indian vulture (Gyps indicus) and the slender-billed vulture (Gyps tenuirostris) population sizes. In Nepal, although the reduction was less dramatic, nearly 75 percent of all white-rumped vultures died between 2002 and 2009. Today, the IUCN’s Red List considers all three species to be Critically Endangered.

Once this rapid decline became widely known, it created a chorus of disagreements within the scientific community. Adam Welz, a journalist who covered the story at the time, reported for the Guardian that conflicting explanations for the deaths abounded without any consensus for several years. Some experts told him that India’s increasingly westernized middle-class was consuming more beef, thus detracting from the vultures’ chief source of food, which were cows. Others claimed that modernization of India demanded so much stone and timber that vulture nesting sites, typically set in cliffs and trees, were becoming scarcer. A few even suggested that pesticides could be responsible for the crash.

“Most prominent and funded scientists, were convinced it was an infectious virus,” reported Welz. However, repeated attempts to isolate the mysterious virus failed.

Welz himself witnessed a surviving vulture population gathering in a large cluster in northern India, ripe for the transmission of an infectious agent, but with no indication that any individuals were sick. In 2000, such evidence led the Peregrine Foundation to create the Asian Vulture Crisis Project with the Ornithological Society of Pakistan, away from the highly charged and political atmosphere surrounding the issue in India at the time. Their discovery, reported in the journal Nature, revealed that a minute dose of the anti-inflammatory drug diclofenac, could cause lethal kidney damage in griffon vultures (of the genus Gyps), with death occurring within two days. Sampling of available carcasses Sampling of available carcasses across central and northern India revealed that they did indeed contain sufficient diclofenac to account for the rapid decline of vultures. 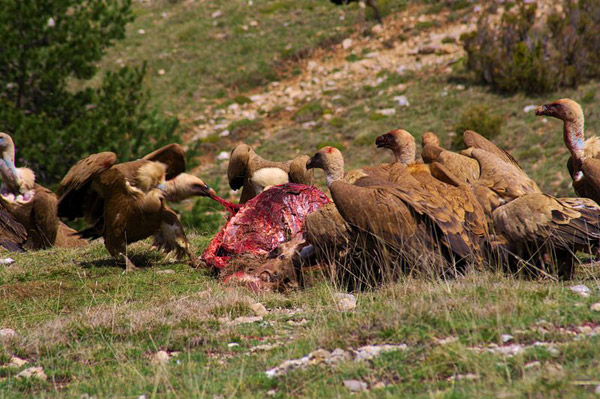 A group of griffon vultures (Gyps fulvus) descend from the sky and land on a dead doe in Cataluña in Spain. Photo by: Mario Modesto Mata/Creative Commons 3.0.

Scientists continued to monitor both carcasses and vultures in the years following India’s ban in 2006. They found that the concentration and prevalence of diclofenac in carcasses before and soon after the ban did not change (about 10.8 percent). However, within two-and-a-half years of the ban, only 6.5 percent of carcasses were found to contain diclofenac. Predictive models found that the rate of decline in vulture numbers dropped by 40 percent from years past, but still remained as high as 18 percent annually. The enforcement of the ban was called into question, implying that stronger efforts would have to be made to remove diclofenac from the market before populations could recover.

As of 2011, death rates among India’s vultures appear to have slowed dramatically, but imprecise census data still worries vulture conservationists. Officials recommended a substitute for diclofenac, named meloxifam, which has low toxicity to Gyps vultures. Unfortunately, due to its infrequent use, it remains more expensive. Recent evidence indicates that diclofenac marketed for use in humans has been showing up on veterinary pharmacy shelves, as a cheap but deadly alternative to meloxifam.

The fight to save India’s vultures is far from over, but the lessons learned from these population crashes are impossible to ignore.

“The case here is clear—it is really a question of learning from what happened in India, and also upholding and being coherent with the leading role of many EU policies, notably on nature conservation,” wrote conservationists in a technical document released recently on diclofenac in Europe.

They insist that diclofenac, and possibly other anti-inflammatory drugs, are dangerous to vultures. Thus, they recommend that efforts should be made to avoid their use across the planet, including in vulnerable regions such as Africa, where vultures are a prominent feature and formal domestic animal husbandry is only just expanding.

Vultures and diclofenac in Europe The cinereous vulture (Aegypius monachus) is the biggest of the old world vultures. Photo by: Rhett A. Butler.

Vultures survive almost entirely on carrion, or decaying meat. In Spain, this means they consume the carcasses of farm animals left in special sites called muladres. By cleaning and disposing of these dead animals, they serve a unique role in local communities. Carcasses may otherwise prove enticing to stray dogs, which in turn can transmit dangerous diseases like rabies. In fact, experts estimated that the adoption of a vulture conservation program would save India nearly $56 million in the long run by avoiding the need for collection and disposal of carcasses or the management of disease spread in the large stray dog population. For vultures to safely perform their important role, there must be monitoring of sites like muladres to prevent vultures from feeding on animals that died of infectious diseases.

Due to the high standards of drug control in Europe, compared to countries like India, conservationists had not been overly worried about instituting a diclofenac ban in Europe. In fact, nine vulture conservation projects had already received 10.7 million Euro (nearly $15 million) between 2008 and 2012. It is thus puzzling that in the spring of 2013, the Spanish Agency for Medicines authorized the use of diclofenac by veterinarians on pigs and cattle within Spain. Other European countries are also marketing diclofenac —in Italy, it is available under the name Reuflogin for use on horses, cattle and pigs.

The Vulture Conservation Foundation, a large NGO fighting to eliminate poisoning of vultures has formed a coalition—including the Royal Society for the Protection of Birds, and BirdLife Europe—to urge the EU to consider imposing a continent-wide ban on veterinary diclofenac.

To date, efforts by the coalition have resulted in letters sent to 12 countries within the European Union, and the acquisition of over 16,000 signatures on a change.org petition (which may be viewed here). A formal request to the EU for a referral commission to be instigated to evaluate the marketing of diclofenac has also been made.

The coalition believes that “the EU and its Member States have a legal obligation to conserve vultures under the EU Birds Directive and EU Veterinary Drugs legislation that require avoiding ecological damage.”

The hope is that this has the added advantage of sending a signal to African countries to stop the use of diclofenac, which is already proving to a problem for African vultures. 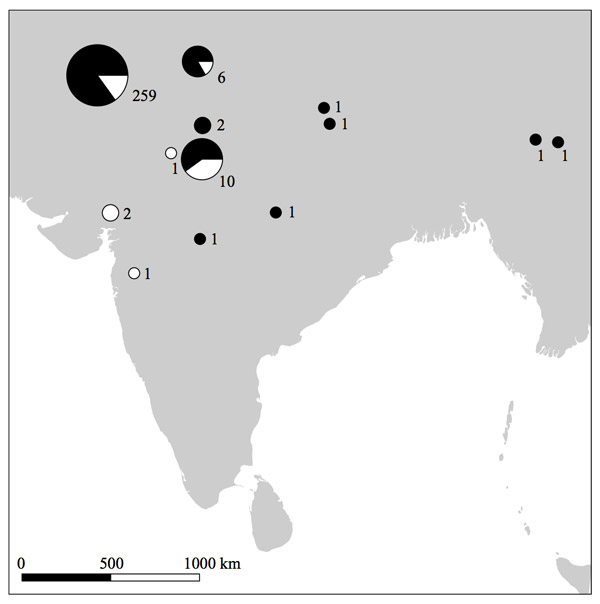 Proportion of vultures with diclofenac residues, visceral gout or both (indicated by the black area of each pie chart) at 13 localities where dead or dying vultures were found. The area of circles is scaled according to the number of birds assessed per site, which is given next to each. Figure adapted from Shultz et al., 2004.

(02/17/2014) Bilal Habib is closely tracking the flight of a bird. Six times a day he gets its location, within a few hundred feet, through a GPS monitoring device attached to its body. One of the last members of its species, this Great Indian Bustard is part of the latest effort to save its kind from joining the ranks of other extinct birds like the dodo and the passenger pigeon.

(02/10/2014) 365-988 million birds are killed in the U.S. each year in collisions with buildings, estimates a review published last month in the journal The Condor: Ornithological Applications.

How hunters have become key to saving Bulgaria’s capercaillie

(02/04/2014) Surprising clatter cuts through the silence in the snowy forest shortly before sunrise. The powerful clicking sounds like a dropping Ping-Pong ball before culminating in a loud pop resembling the opening of a champagne bottle. This sound is heard clearly and far. Propped on a thick pine tree branch, with a peacock-fanned tale, relaxed wings and head pointing skyward, a western capercaillie is singing. The song terminates with a low-frequency sound similar to scraping a fork to the bottom of a frying pan. It’s exactly during those last few moments of singing that something unusual happens: the male bird goes temporarily deaf. Hence the species’ common name in Bulgarian—deaf bird.