Mongabay.org, the non-profit arm of environmental science web site Mongabay.com, has selected winners of three environmental reporting prizes under its Special Reporting Initiatives (SRI) program. The three prizes, which were launched in January, explore the impacts of rising human consumption on forest and marine ecosystems.

The winners, selected from more than 150 applicants by a panel of issue-area experts, include Robert S. Eshelman, Ruxandra Guidi and Bear Guerra, and Dominic Bracco II and Erik Vance. The winners receive a stipend and travel funds to research and write a series of in-depth articles over a six-month period. The topics include cleaning up commodity supply chains, community forestry as a climate change solution, and the market for sustainable fisheries products in China.

“The SRI program aims to stimulate reporting on environmental issues that haven’t garnered much attention from mainstream media outlets,” said Mongabay.org President Rhett A. Butler. “I’m very excited to see the stories that result from these new SRI topics which explore the challenges of protecting the environment in the face of rising global population and consumption.”

Deforestation accounts for roughly ten percent of global greenhouse gas emissions, more than that created by all the world’s cars and trucks. Just four commodities – soy, palm oil, beef, and pulp/paper – are responsible for the majority of global deforestation and the U.S. is a leading consumer market for those goods. U.S. law protects endangered hardwoods, yet enforcement has been sporadic. In his reporting, Robert will investigate the links between U.S. consumer goods and the destruction of Indonesian forests and how U.S. law might be used to address a leading cause of climate change.

Robert S. Eshelman is a freelance journalist based in Brooklyn, New York. His articles have appeared in The American Prospect, The Baffler, Abu Dhabi’s The National, ClimateWire, InsideClimate News, Scientific American, The Nation, and Mother Jones, among other print and on-line publications. He is a contributing writer at The Brooklyn Rail and an associate producer on “Years of Living Dangerously,” a documentary series about climate change airing on Showtime. Robert has reported extensively in the Middle East and North Africa, Europe, the United States, Central and South America, and Asia, covering topics ranging from politics and economics to culture and religion. He earned a B.A. in Middle East, South Asian, and African Studies from Columbia University and an M.A. in health and science journalism from Columbia University’s Graduate School of Journalism. 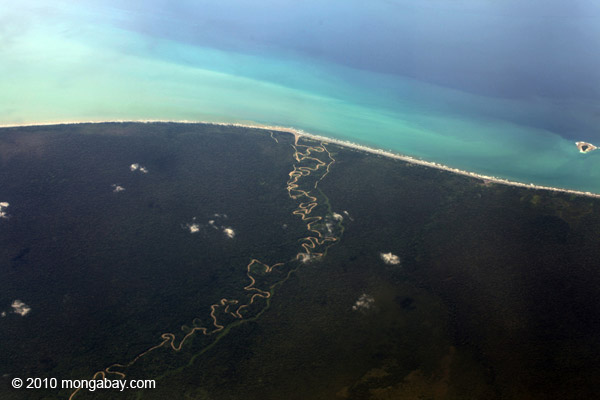 Where the forest meets the sea in West Paupa, Indonesia. Photo by Rhett A. Butler / mongabay.com

Between the Forest and the Sea: Climate Change and Community Forest Management in Kuna Yala, Panama
SRI Fellows Ruxandra Guidi and Bear Guerra

Ruxandra Guidi & Bear Guerra’s stories will explore what’s at stake for indigenous groups like the Kuna of Panama, whose livelihoods and homes are already being affected by sea level rise and climate change, and the ways in which they are adapting to it while trying to preserve their customs and sovereign control of their forests. On the other hand, they will examine how the Kuna continue to manage their forests as they have for generations; they’ll examine what can be learned from them about community forest management, and what can be applied to other modern-day forest-dependent communities facing similar situations.

Ruxandra Guidi, a native of Venezuela, has reported throughout the United States and Latin America, for magazines and public radio, and in both English and Spanish. She has worked extensively as a freelancer, and recently held staff positions at Southern California Public Radio, where she covered immigration and religion, and at KPBS Public Broadcasting, where she covered the U.S.-Mexico border as part of the Fronteras Desk initiative. Her work has aired on PRI’s The World, NPR, CBC, Marketplace, Deutsche Welle, NPR’s Latino USA, and Radio Ambulante, and has been published by Orion Magazine, National Geographic NewsWatch, The Atlantic, and others. She’s a producer and board member for the award-winning non-profit journalism collaborative, Homelands Productions, and she collaborates often with husband, Bear Guerra, under the name Fonografia Collective.

Bear Guerra is a photographer with over a decade of experience, whose work addresses globalization, development, and social and environmental justice issues. His images, photo essays, and multimedia stories have been published by outlets including Orion Magazine, The Wall Street Journal, The Atlantic, Le Monde, On Earth Magazine, Virginia Quarterly Review, NPR, the BBC, The Boston Globe Magazine, National Geographic NewsWatch, and many others; and have been exhibited widely – both nationally, and abroad. He is currently a 2013-2014 Ted Scripps Fellow in Environmental Journalism at the University of Colorado – Boulder; and was a finalist for a National Magazine Award in Photojournalism (2010). In 2014, he became a producer and board member for the award-winning non-profit journalism collaborative, Homelands Productions. 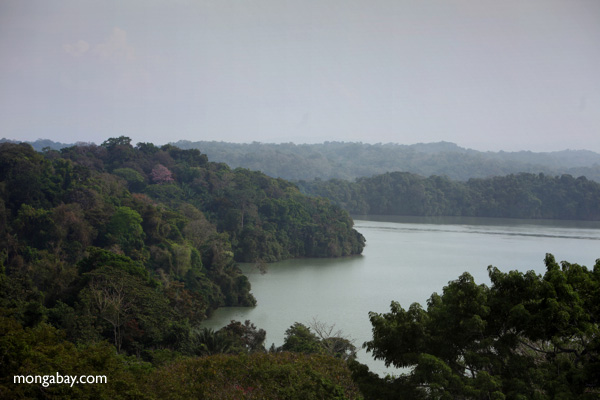 Forest landscape in Panama. Photo by Rhett A. Butler / mongabay.com

IS THERE DEMAND FOR SUSTAINABLE FISHERIES’ PRODUCTS IN CHINA?

From the plate and from the sea: tracking the realities of the market for sustainable seafood in China
SRI Fellows Dominic Bracco II and Erik Vance

China is the world’s largest consumer and producer of seafood products, with its practices substantially impacting global fisheries management and ocean health far from its own shores, from West Africa to the Western Pacific. While some markets are moving toward more responsibly sourced seafood, it’s unclear whether this shift is taking place in China. Is there a market for sustainable seafood in China? Erik Vance and Dominic Bracco II will explore this question from two angles: from the plate and from the sea. They will report on restaurants serving sustainable seafood to Chinese diners as well as the fishing boats of Thailand where much of the seafood eaten in China is caught.

Dominic Bracco II is a photographer whose work centers around the themes of economic effects of globalization on local communities. Dominic’s work often documents the effects of Mexican and North American policies on his home near the Texas / Mexico border. He holds degrees in journalism and Spanish literature from The University of Texas at Arlington. Bracco has published his photographs in Harper’s Magazine, The New York Times Magazine, The Washington Post, and Smithsonian Magazine. Dominic is a founding member of the collective Prime and is based in Mexico City.

Erik Vance is a science writer native to the San Francisco Bay Area, currently living in Mexico City. His recent works include “Why Can’t Mexico Make Science Pay Off?” for Scientific American and is “Emptying the World’s Aquarium” for Harper’s Magazine with support from the Pulitzer Center for Crisis Reporting. He is currently under contract with National Geographic. Vance has also published in The New York Times, Discover, and The Christian Science Monitor among others. Eels in a fishmarket. Photo by Rhett A. Butler / mongabay.com

All reporting for these SRIs will appear in 2014. Mongabay.org’s SRI program currently has three other fellows writing on other environmental topics.

Mongabay.org has one SRI project that is currently accepting applications: Benefits of Amazonian protected areas. Applications are due Friday, April 18th.

Other opportunities will be announced in coming months. Interested parties can sign up for notification of new opportunities via the SRI newsletter.

(02/21/2014) With six Special Reporting Initiatives (SRI) already under way, Mongabay.org is excited to announce a call for applications for its latest journalism grant topic: Amazonian protected areas: benefits for people. The Amazon’s system of protected areas has grown exponentially in the past 25 years. In many South American nations, the mission of protected areas has expanded from biodiversity conservation to improving human welfare. However, given the multiple purposes and diverse management of many protected areas, it is often difficult to measure their effect on human populations.