A new project aims to track the movements of the Critically Endangered species in a last ditch effort to preserve it.

Bilal Habib is closely tracking the flight of a bird. Six times a day he gets its location, within a few hundred feet, through a GPS monitoring device attached to its body. One of the last members of its species, this Great Indian Bustard is part of the latest effort to save its kind from joining the ranks of other extinct birds like the dodo and the passenger pigeon.

On Christmas day last year, a Great Indian Bustard was fitted with a radio tracking device in a small town in the Western plains of India. Habib, a scientific researcher at the Wildlife Institute of India in Dehradun, is heading the project.

“We know a lot about the ecology of this species, that it lives on grasslands and so on,” says Habib, who was recently awarded a Young Scientist Award from UNESCO for his work in involving local communities to conserve a Biosphere reserve in Northern India. “But, interestingly the bird is seen for only four to six months of the year. Nobody knows where they go for the rest of time.”

Locally known as “Maaldhok” or “Yerbhoot” or “Ghorad,” the Great Indian Bustard (Ardeotis nigriceps) was a relatively common sight five decades ago in the semi-arid regions and crop fields across parts of Central and Western India. But today less than 200 remain. 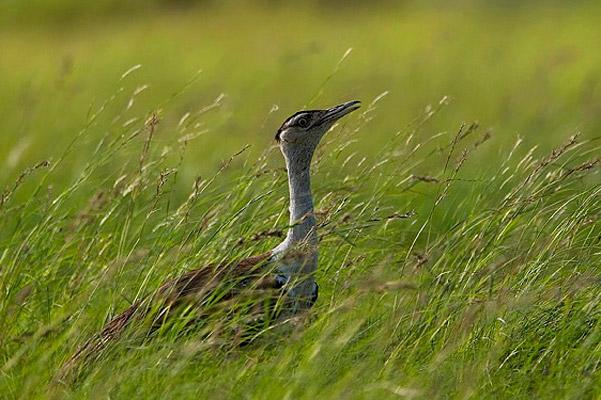 Although many think it might be too late, some biologists are holding out hope for the Great Indian Bustard through a new radio tracking project. Photo by: Sandeep Desai.

“The Bustard is a very difficult species, since like most birds of arid and semi-arid regions, they move around a lot to better pastures, because rainfall is not uniform in all areas,” explains Asad Rahmani, director of the 130-year-old Bombay Natural History Society who has been actively campaigning for the conservation of the Great Indian Bustard for over three decades. “If they stick to one area, they have an innate tendency to move for newer pastures, more suitable habitats.”

The species has been dwindling in number for a long time, despite having designated sanctuaries across the country, with a few of these sanctuaries being bereft of even a single bustard today.

“Sometimes such sanctuaries are not useful for particular species. There is a need to take a drastically different approach, which most people don’t understand” says Rahmani, who in 2006 had authored a report entitled ‘Need to start Project Bustards.’

One of the challenges in protecting this species has been the fact that it is generally found in grasslands and farmlands, areas that are difficult to designate as protected areas due to their economic importance. Large-scale agriculture and destruction of grasslands by overgrazing along with hunting in certain areas continue to threaten the species, prompting BirdLife International to declare it as Critically Endangered in 2011.

Wildlife tracking using satellites has been available for almost two decades now, and has been used on other endangered birds in India like the bar-headed goose and black-necked cranes. However, this is the first time that it will be used for a Critically Endangered species in India. The solar powered transmitter on the GPS tracker attached to this Great Indian Bustard has the potential to send back valuable information for the next three to four years.

“Through this project, more information about the migratory patterns of the bird can be ascertained, which can then be used in its conservation,” says Habib.

The Great Indian Bustard is one of the four species of bustards found in India, all of which are dwindling in number. The vanishing bird was actually a candidate for India’s national bird when the topic was up for consideration in the 1960s, but the title eventually went to the prettier and more commonly found peacock. Experts suggest that lack of media attention or government apathy toward conserving this bird, as compared to the Bengal tiger or the Asian elephant, is part of the reason for its current dire state.

Examples like that of the California condor, which was bought back from the brink of extinction hold out hope for the Great Indian Bustard. However, many biologists believe this effort might be 20 years too late, making the bustards future increasingly uncertain. The direct and indirect involvement of local people along with setting up protected areas in existing farmlands will be absolutely essential for any effort to be successful. Habib hopes the study will help answer a few questions.

“This study will tell us, what habitats they are using and help us evaluate the current protected areas. Can we combine these particular characteristics and conserve this species. Can we bring them back?”

This article is provided by Scienceline, a project of New York University’s Science, Health and Environmental Reporting Program.

(01/28/2014) The Wildlife Conservation Society-India has been camera trapping wild animals for over 20 years in the Western Ghats. The results reveal the most intimate, fascinating and sometimes comical insights into animal behavior and ecology. These mammals generally become secretive and protective during parenting, and therefore we seldom get to see little ones in the wild. But discretely placed camera traps have not only caught glimpses of these adorable wild babies, but also produced wonderful family albums!

(12/16/2013) Hornbills are as peculiar, as they are magnificent. Their calls especially, can sound rather strange to the uninitiated – some grunt, some growl, and some cackle maniacally. These queer birds, with their large brightly-colored curved beaks, and a distinctive cavity-nesting habit, are also totem animals for many tribes in India.

(10/25/2013) The Nilgiris, also known as the “Blue mountains,” in southern India are an extraordinary mountain range that form one of the most diverse biospheres in the country, the Nilgiri Biosphere. And the Nagarhole National Park, declared a tiger reserve in 1999 is part of this biosphere. The Kabini River flows through the National park and is the lifeline to a wide variety of flora and fauna. This river transforms Nagarhole into a water world of wonder.