Today I moderated a panel at Asia Pulp & Paper’s one year anniversary event of its forest conservation policy. Briefly, the policy commits APP — which until very recently was widely considered one of the most destructive forestry companies operating in Indonesia — to protect forests, peatlands, and the rights of local communities.

As readers of Mongabay are likely aware, I have covered APP very extensively in the past. This coverage has highlighted a number of issues, including social conflict, destruction of forests and peatlands, greenhouse gas emissions, alleged illegal logging, and greenwashing. Given the critical nature of my reporting, I was surprised when APP last month invited me to moderate the event. But considering the role the private sector must play in efforts to slow deforestation and the magnitude of APP’s recent commitments, I felt it was important and appropriate to participate. I wasn’t disappointed by the event: the discussion between the robust mix of APP supporters and critics touched on a number of contentious issues ranging from encroachment to APP’s deforestation legacy. 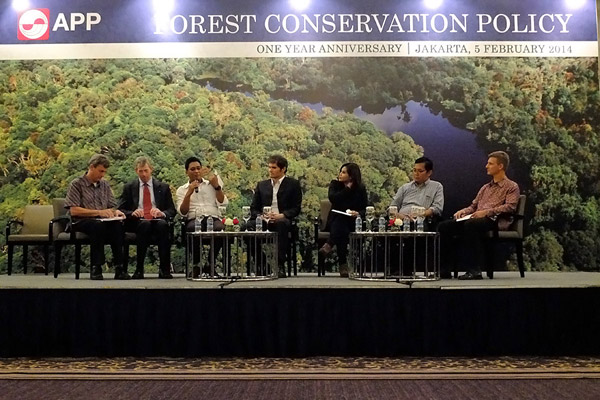 These were the participants: