by Mrinalini Erkenswick Watsa on 17 February 2014

Scientists have identified a new species of day gecko that is the largest in its genus (Cnemaspis) to be found in Sri Lanka. To date, it has been observed only within the Rammalakanda Reserve in southern Sri Lanka, an area spanning just 1,700 hectares, raising questions about the viability of this population and hence the species’ long-term prospects.

The gecko belongs to the enigmatic genus of Cnemaspis, which in 2003 contained only four representative species within Sri Lanka. Since then, scientists have discovered 18 further species in the island country, but none as large in size as this most recent discovery. Known locally as the ‘Rammale day gecko’ (Rammale pahalpalli in Tamil, and Rammale diva huna in Sinhalese), the new gecko measures around 53 millimeters from snout to vent—a small reptile to us, but a giant in comparison to other gecko species in the area.

Its most distinctive features are its large size and numerous scales on the ventral side or belly. In fact, the Rammale day gecko possesses nearly 22 percent more scales than the next closest species, Cnemaspis alwesi, while approaching the size of Cnemaspis sisparensis, the largest gecko recorded to date on the entire Indian peninsula. 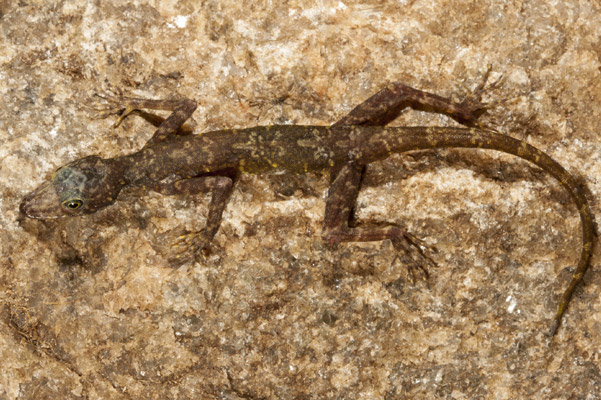 The male of the newest addition to the genus Cnemaspis in Sri Lanka. Photo courtesy of Vidanapathirana.

Scientist Dulan Ranga Vidanapathirana, and his colleagues from the Herpetological Foundation of Sri Lanka and the Center for applied Biodiversity Research and Education in Kandy, reported this discovery in the journal Zootaxa.

“The occurrence of such a large species in a small forest patch at the edge of the wet zone is unexpected,” they write.

Rammalakanda Forest Reserve spans the border between Hambanthota and Matara districts in southern Sri Lanka, and supports a rich diversity of flora and fauna, including 99 species that can be found only within the reserve and nowhere else. The National Conservation Review recognizes it as one of the top 70 forests requiring conservation action within Sri Lanka.

Despite the Reserve receiving some protection from the government, concerns are high for the future of this rare and cryptic species that has eluded discovery until today.

“Illegal tree felling to cultivate tea has become a major threat in the area, ” write the authors. “Tea plantations and human settlements in the surrounding areas are slowly expanding, and are encroaching towards the forest, slowly destroying the habitat of this species.”

It is unfortunate that the celebration of a newly discovered species must immediately be tempered by anxiety for its future, but this is the increasing reality for scientists and conservationists working in the world’s tropical forests. As for this gecko, in honor of the place in which it was discovered, it has been named Cnemaspis rammalensis. 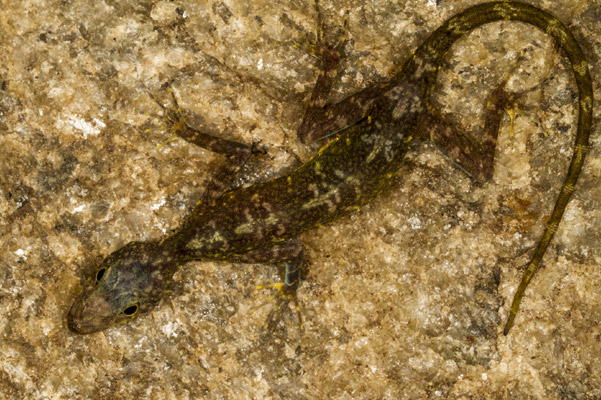 The female of the newest addition to the genus Cnemaspis in Sri Lanka. Photo courtesy of Vidanapathirana. 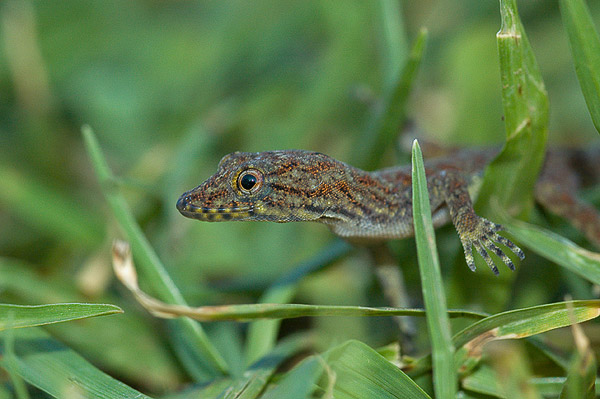 (01/27/2014) Sea anemones are supposed to sit on the bottom of the ocean, using their basal disc (or adhesive foot) to rest on a coral reef orsand. So, imagine the surprise of geologists in Antarctica when they discovered a mass of sea anemones hanging upside from the underside of the Ross Ice Shelf like a village of wispy ghosts. The researchers weren’t even there to discover new life, but to learn about south pole currents through the Antarctic Geological Drilling (ANDRILL) Program via a remotely-operated undersea robot.

(01/21/2014) The discovery of a new, bi-colored beetle species in the lowland rainforest of French Guiana just added a little pizzazz to the ranks of the Pseudomorphini tribe of beetles. With wing cases (elytra) that sport black spots against a rusty red background, the newcomer was dubbed Guyanemorpha spectabilis, or the spectacular Guyane false-form beetle, by entomologist Terry Erwin in the journal ZooKeys.