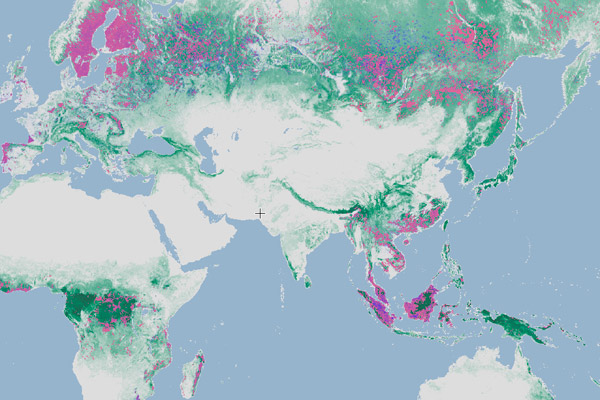 Global Forest Watch showing tree height and forest loss and gain between 2000 and 2012.

The platform, called Global Forest Watch and developed over several years with more than 40 partners, draws from a rich array of “big data” related to the word’s forests and translates it into interactive maps and charts that reveal trends in deforestation, forest recovery, and industrial forestry expansion. Global Forest Watch is the first tool to monitors global forests on a monthly basis, allowing authorities and conservationists to potentially take action against deforestation as it is occurring.

“Businesses, governments and communities desperately want better information about forests. Now, they have it,” said Andrew Steer, WRI President and CEO, in a statement. “Global Forest Watch is a near-real time monitoring platform that will fundamentally change the way people and businesses manage forests. From now on, the bad guys cannot hide and the good guys will be recognized for their stewardship.”

Global Forest Watch leverages Google’s computing cloud to make sense of staggering amounts of NASA satellite data, which in the past would have taken years to process, according to Rebecca Moore, Engineering Manager at Google Earth Outreach and Earth Engine, who worked with a team of researchers led by University of Maryland scientist Matt Hansen to develop the high resolution dataset of forest cover and change that underpins the system.

“[To produce that databaset] we analyzed… almost 700,000 Landsat images,” Moore said. “It was a total of 20 terra-pixels of Landsat data and to do that we applied one million CPU hours on 10,000 computers in parallel in order to run Dr. Hansen’s models to characterize forest cover and change. It would have taken a single computer 15 years to perform this analysis that we completed in a matter of days using the Google Earth Engine technology.”

The result is a high resolution map that reveals annual change in forest cover since 2000. Global Forest Watch integrates data from other sources to generate near-real time alerts akin to the system Brazil has used to help reduce deforestation by nearly 80 percent since 2004. Users — whether they be government authorities, conservationists, members of traditional forest communities, activists, or armchair environmentalists — can set up personalized alerts to generate emails whenever there are signs of deforestation in an area, including municipalities, national parks, or zones defined by the user drawing shapes on a map.

“Technical users can download the data for their own analysis,” said Nigel Sizer, director of the Global Forest Project. “But a cool function for everyone is the alert system, which automatically sends you alerts telling you when there is forest cover change in the area you specify.”

Global Forest Watch however goes well beyond displaying forest cover and change data. In several countries, WRI has persuaded governments to release spatial data on forestry concessions, including oil palm, timber, and pulp and paper plantations in Indonesia, a country which until now has been notorious for lack of transparency in its forestry sector. Global Forest Watch lists each concession in the country, including the owner and permit information. That data can be used as a layer to see how fast oil palm plantations have expanded at the expense of natural forests and even pinpoint cases where illegal conversion has occurred within protected areas. For example, the map shows oil palm development in two nature reserves — Gunung Nuit Penrisen and Gunung Raya Pasi — in Indonesia’s West Kalimantan. Global Forest Watch also has extensive concession data for Congo Basin countries, Liberia, and Colombia. Further data will be added as it is becomes available.

The concession data could prove especially useful to companies who have committed to eliminating deforestation from their supply chains.

“It’s going to help our suppliers demonstrate that they are indeed also free of deforestation,” said Duncan Pollard of Nestle, which launched a zero deforestation policy for palm oil sourcing in 2010. “And it’s going to help us monitor and report on the progress that we make on to our global commitment.”

“Deforestation poses a material risk to businesses that rely on forest-linked crops. Exposure to that risk has the potential to undermine the future of businesses,” added Paul Polman, CEO of Unilever, in a statement. “As we strive to increase the visibility of where the ingredients for our products come from, the launch of Global Forest Watch – a fantastic, innovative tool – will provide the information we urgently need to make the right decisions, fostering transparency, enforcing accountability, and facilitating partnerships.”

WRI says the tool, which is web-based and usable on virtually any Internet-capable device, will also help governments better manage forests and conservation areas.

Heru Prasetyo, Head of Indonesia’s REDD+ Agency, added that the tool will be a boon to his new agency, which is tasked with shifting the country away from a deforestation-as-usual approach to forest management.

“The ability to better monitor our forests and have up-to-date information to make decisions are critical,” he said in a statement. “I commend the Global Forest Watch initiative, will continue to support it, and expect that it will be an effective tool for the world and each nation as we leave neglect and ignorance in the past.”

The ignorance will continue to diminish with Global Forest Watch’s flexibility to integrate new data sources, which makes it well-positioned to benefit from new satellites slated for launch in coming years.

“It’s possible for the first time to have this near-real time update of the world’s forests,” said Google’s Moore. “That has never existed before. It’s quite unprecedented.”

“But again there are some really promising new satellites scheduled to launch that we think will improve the timeliness and the resolution of this data.”

Global Forest Watch also takes advantage of trends in user-generated content and crowd-sourcing to augment its offerings. Users can submit photos and their own reports to the system, potentially creating a global network of forest monitors who can help hold companies, governments, and NGO’s accountable for destroying or failing to preserve forests. Global Forest Watch is also partnering with media outlets to populate its maps with news articles on forests. The tool itself has the potential to generate virtually a limitless supply of news stories, boosting awareness around forest issues.

“We now have the possibility of doing something that would have been absolutely unheard of ten years ago which is near-real time data delivered to everybody who has a laptop computer or smart phone,” said Andrew Steer, the President and CEO of the World Resources Institute. “So when the president of Indonesia passed good laws on forests it was very difficult for him to know what was going on in real time in Kalimantan. Now he can.” 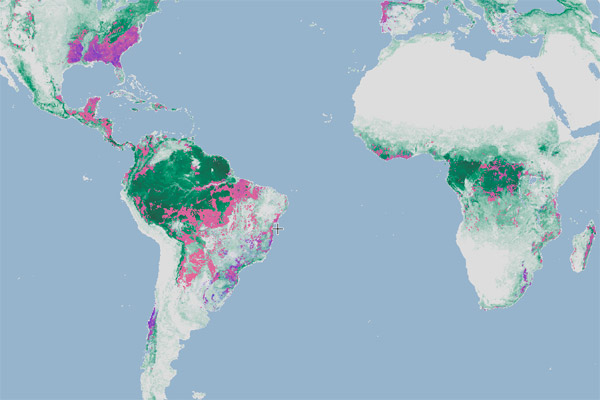 Global Forest Watch showing tree height and forest loss and gain between 2000 and 2012.

(02/14/2014) The University of Maryland, Google, and other partners have made available a trove of forest cover data for download.