Massive offshore wind turbine arrays would reduce hurricane wind speeds and storm surge, reports a study published this week in Nature Climate Change. And while the size (tens of thousands of turbines) and cost (hundreds of billions of dollars) is difficult to imagine, the reduction in storm damage and value of electricity produced would effectively bring the price tag to zero according to the study authors.

Using computer models, scientists from Stanford and the University of Delaware determined what atmospheric effects turbine arrays of various sizes and densities would have on hurricane wind speeds if installed within 100 km of the US coast. Testing their model on data from Hurricanes Katrina and Isaac, as well as Tropical Storm Sandy, the authors conclude that offshore wind farms would significantly reduce peak wind speeds and storm surge during high energy storms.

However, construction of an array this size would be a massive undertaking. The world’s largest offshore wind farm, the London Array, currently houses 176 turbines and cost $3 billion to construct. The authors, aware of this hurdle, conducted a cost-benefit analysis comparing wind farms to other storm damage mitigation systems, such as the sea walls proposed in the wake of Tropical Storm Sandy.

“If wind turbines are used only for hurricane damage avoidance, an array covering 32 km of linear coastline in front of New York City would cost ~$210 billion with no payback, higher than the cost of proposed sea walls, $10–29 billion,” the authors note. However, “turbines pay for themselves from the sale of electricity they produce and other non-market benefits, but sea walls have no other function than to reduce storm surge (they do not even reduce damaging hurricane wind speeds), so society bears their full cost.” 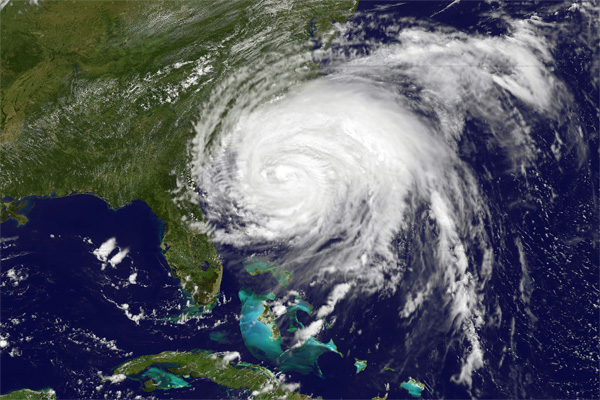 This visible image of Hurricane Irene from the MODIS instrument aboard NASA’s Terra satellite. Photo: NASA.

Further, the authors calculate that the cost per kilowatt hour of electricity generated by offshore wind turbines is much cheaper than that of fossil fuels: “Including hurricane damage avoidance, reduced pollution, health, and climate costs, but not including tax credits or subsidies, gives the net cost of offshore wind as ~4–8.5¢ kWh−1, which compares with ~10¢ kWh−1 for new fossil fuel generation.”

Interestingly, the model shows that arrays significantly large enough will protect themselves from the full force of an approaching storm, often responsible for destroying smaller installations.

“As turbine arrays first experienced and dissipated slower winds near them, thereby weakening the overall hurricane by increasing central pressure,” the authors write, “the turbines themselves prevented nearby winds from reaching their maximum certified wind speed.”

If these massive wind farms can slow a meteorological event as powerful as a hurricane, critics have questioned what other less beneficial climate impacts they might have.

“We examined this issue with the same model, where we simulated the impact on weather and climate of between 4 million and 1.5 billion wind turbines,” Mark Z. Jacobson, lead author on both studies, told Mongabay. The previous study, published in the Proceedings of the National Academy of Sciences in 2012, showed that while turbines do create a mild warming effect at the surface level due to a reduction in water evaporation, this also means there is less water vapor (a greenhouse gas) in the atmosphere which results in mild cooling.

“These two processes (surface warming near turbines and atmospheric cooling due to lesser cloud formation) offset each other almost exactly,” Jacobson said. Although the model does predict a slight overall cooling effect, the climate impact is insignificant compared to increasing levels of atmospheric CO2.

“Even with 4 million turbines (enough to power half the world’s all-purpose energy in 2030) [we see] an almost trivial overall cooling impact in the global average, so 78,000 turbines would have an even smaller global impact.”