An assessment of ocean acidification, presented at the UN Climate Change Conference in Warsaw in November 2013, starkly concluded that acidity is on track to rise 170 percent by the end of this century. As many key species are sensitive to changes in acidity, this would drastically impact ocean ecosystems, with effects especially pronounced in polar regions where the cold waters intensify acidification, and which are home to many organisms that are particularly vulnerable to acidification.

The ocean acts as a giant sink for carbon, absorbing 24 million tons of CO2 from the atmosphere every day. Since industrialization, approximately 30 percent of anthropogenic (human generated) CO2 has been absorbed in this way. In the context of climate change this is incredibly important, as the amount of atmospheric CO2 is directly linked to global temperatures. But as CO2 is absorbed, the pH of the water decreases, and it becomes more acidic. Compared with pre-industrial levels, the ocean’s acidity has soared 26 percent, and will only increase as CO2 emissions rise. Not only will this likely injure marine ecosystems, but the more acidic the water becomes the less it is capable of absorbing carbon, thereby exacerbating CO2 emissions.

In addition to ecosystem damage, ocean acidification could bring about significant economic losses.

“People who rely on the ocean’s ecosystem services – often in developing countries – are especially vulnerable,” stated a press release by the International Council for Science.

The report’s authors represented the largest-ever gathering of ocean acidification scientists, with 540 experts representing 37 countries contributing to the discussion of acidification research. They found that the current rate of acidification is unprecedented, and is ten times faster than at any other time in the last 55 million years.

With the changing chemistry of the oceans comes a myriad of cascading effects. Coral reefs may start to erode faster than they are being built. Species that rely on calcification to build their shells and skeletons – using forms of calcium carbonate – may find acidic waters too corrosive to survive. This means the shellfish industry will likely suffer as mollusks (including mussels and oysters) are among the organisms most sensitive to acidification. And with other factors also changing at the same time, such as temperature, overfishing, and pollution levels, the cumulative effects are likely to be even more pronounced.

As CO2 is more soluble in colder water, the polar oceans are especially vulnerable. Not only are these regions suffering the greatest impacts of acidification today, they also act as an indicator of how acidification may impact warmer oceans in the future. 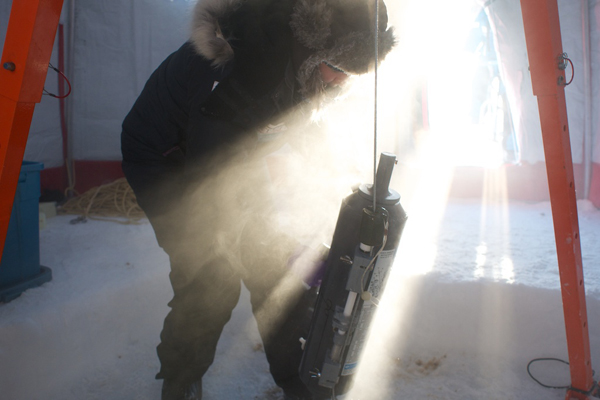 A key question in acidification research is the effect of acidity not only on individual species, but on the entire marine ecosystem. One way to assess this is by investigating how organisms at the bottom of the food chain are dealing with decreasing pH, since their health and abundance is vital for the health of the ecosystem as a whole.

An intrepid research expedition to the high Canadian Arctic in 2011 aimed to address this question by studying copepods, small crustaceans that form the dominant zooplankton in the Arctic Ocean. The investigations were led by scientists from the University of Exeter and the Plymouth Marine Laboratory in the UK, and their results were recently published in the Proceedings of the National Academy of Sciences (PNAS). They indicate that the range of pH levels copepods experience in their daily lives may predict the extent to which they will be able to cope with rises in acidity: those with the most specialized requirements may struggle to survive, while more generalist species may well be able to cope in the future.

“Our study found that some marine animals may not be able to survive the impact of ocean acidification, particularly the early-life stages,” said Ceri Lewis from the University of Exeter. “This unique insight into how marine life will respond to future changes in the oceans has implications that reach far beyond the Arctic regions.”

By teaming up with the Catlin Arctic Survey – a collaboration between explorers and scientists – a crucial gap in scientific knowledge could be addressed: what happens to these organisms under the ice during the Arctic winter? Conducting research during this time is extremely challenging, but understanding what happens then may be particularly important. 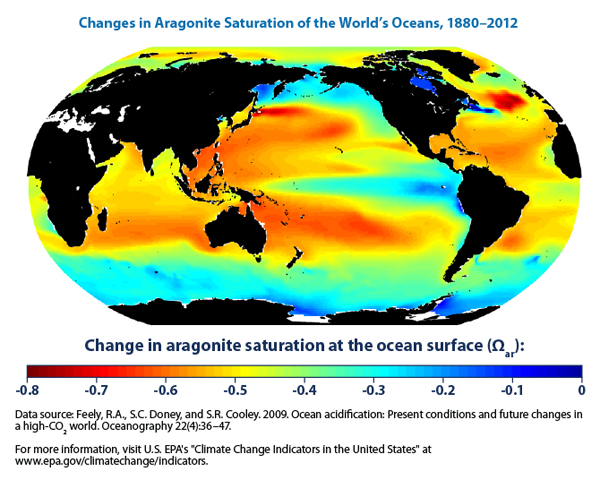 “If we don’t understand what goes on over the whole seasonal cycle (and there are very few winter studies) then we have no way of knowing how and what is changing, and why. In winter, there will still be sea ice even if it does eventually all melt in summer. It will always be dark and there will also be food limitations,” Helen Findlay, of the Plymouth Marine Laboratory, told mongabay.com.

“This is therefore an incredibly harsh time of year for any organism living in the Arctic, and as organisms are potentially most vulnerable at this time of year, we need to understand how they survive this time,” Findlay continued. “We were fortunate to get the opportunity to take part in the Catlin Arctic Survey, who wanted to team scientists up with explorers to undertake this difficult fieldwork. Without their support we wouldn’t have had the ice base facility and ability to go to the location in the high Arctic at that time of year.”

The team spent two months camping in sub-zero temperatures to undertake their research, which involved drilling through 1.6 meters (5.3 feet) of ice to collect samples of copepods to determine how their presence and abundance changes at various ocean depths. Although the conditions were almost unimaginably harsh, the experience was not without its rewards.

“Actually, it was amazing. It was quite strenuous both physically and mentally; keeping on top of everything for two months at constant temperatures below minus 25 ºC (-15 ºF) was quite a challenge. Especially as we were sleeping in unheated tents – just a sleeping bag and thermo-rest between us and the ice,” said Findlay. “On a trip like this the hours are long and you don’t really get a day off, but the rewards are that you are living and working in a beautiful environment with amazing wind and light conditions, gathering data that no-one else has collected before you.”

The researchers took samples from a range of depths down to 200 meters (650 feet) below the surface, and monitored the response of both adult and nauplii (early life stage) copepods to pH and CO2 levels that are predicted to occur in the next 100 years.

The sampling revealed distinct layers in the water chemistry, with highest CO2 and lowest pH at around 100 meters (325 feet) below the surface. Adult copepods from the endemic genus Calanus were found to migrate over the whole 200-meter range of sampling, and were thus exposed to a broad range of CO2 and pH conditions. Fortunately, these species did not suffer higher mortality in experiments that imitated future high acidity environments. But adults of the smaller, globally distributed copepod Oithona similis were found to be restricted to the upper 50 meters (150 feet) of the ocean, meaning that they live in a relatively constant environment in comparison with Calanus species. Survival was significantly reduced for Oithona similis in the experiments; its global distribution means that the implications of this could be far reaching. 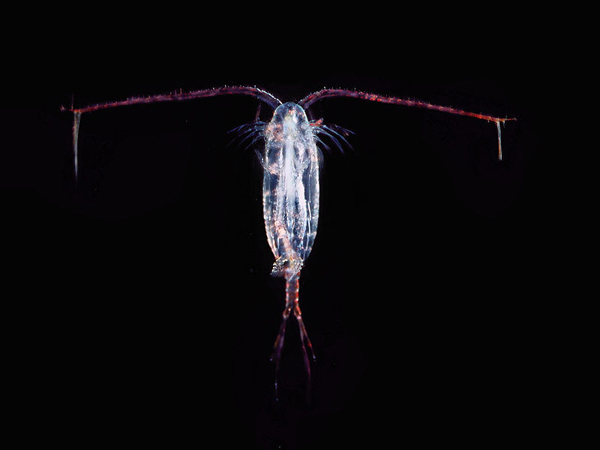 A photo of a Copepod – Photo by Uwe Kils, provided under a Creative Commons Attribution-Share Alike 3.0 Unported license.

Importantly, scientists only found the larval stages of all species in the upper layer of the water column. These responded in a similar way to adult Oithona similis, with reduced survival at high CO2 experimental treatments.

“It seems that copepods that are smaller, or earlier in their life stages, tend not to experience as wide ranging variability as large adults, and this makes them vulnerable to [environmental] shifts,” said Findlay. “The small stuff (copepods and their nauplii) are still very important parts of the food chain, with larger zooplankton and other organisms eating them, so indirectly a decline in these types of organisms could impact the food chain. More directly, if the nauplii (the early life stages) are not able to survive, then there won’t be any adults!”

The effect of increasing acidity and CO2 concentrations on individual copepods is not completely understood, but scientists believe a lack of food in the winter may cause higher mortality, as well as direct effects from pH and CO2 changes on their biological processes.

“These types of small simple organisms do not have very complicated internal structures like a blood system to regulate internal CO2 and pH conditions, both of which are important for things like enzyme activity, ion balance, and many other physiological processes,” said Findlay. “So we think that if we change the external pH or CO2 this influences the internal pH and CO2 conditions, causing a disruption to these normal physiological processes.”

“It’s a problem for some copepods because they don’t have complicated systems for dealing with this, that’s the same for many other organisms, not just copepods,” Findlay continued. “Some organisms are able to adjust proteins or ion exchange to counter-balance the shift, but this generally requires more energy.” 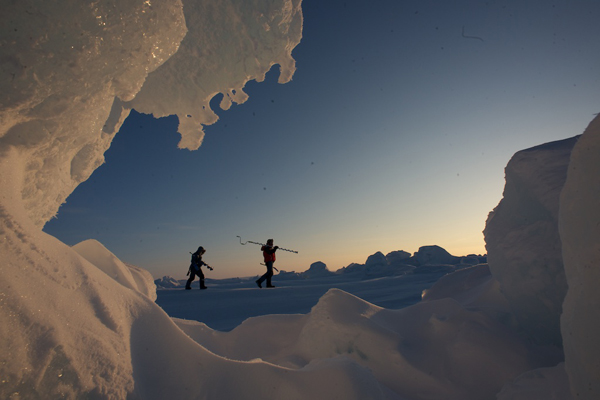 The researchers in the Arctic. Credit: Martin Hartley-Catlin Arctic Survey

Findlay’s findings mirror studies that have looked at temperature response in an array of organisms, and found the normal temperate range of a species can be used to predict its reaction to potential changes.

“The fact [that] this also applies to the pH or CO2 conditions makes sense because a lot of internal processes are dependent on the external pH and CO2 conditions and so if an organism experiences a wide range of these conditions we would expect it to be able to cope with that shift,” Findlay notes.

Although troubling for smaller and more specialized species, the potential for resilience among those that are more generalized is good news. However, the nature of future Arctic ecosystems remains uncertain.

“Certainly there will be species that can survive these changes,” said Findlay. “This is just one more piece of the jigsaw, and there are still many parts that need to be filled in. The ecosystems are likely to shift with both warming and acidification, indeed for Arctic species there are many stressors that will play a part in determining what the ecosystem will look like in the future.”