Yesterday, the Obama administration announced an ambitious new strategy to help tackle the global illegal wildlife trade, including a near-complete ban on commercial ivory. The new strategy will not only push over a dozen federal agencies to make fighting wildlife trafficking a new priority, but will also focus on reducing demand for wildlife parts and actively engaging the international community. The U.S. is the world’s second largest destination for illegal wildlife trafficking after China.

“Today, because of the actions of poachers, species like elephants and rhinoceroses face the risk of significant decline or
even extinction,” U.S. President, Barack Obama, said in a statement. “But it does not have to be that way. We can take action to stop these illicit networks and ensure that our children have the chance to grow up in a world with and experience for themselves the wildlife we know and love.”

Over the past decade, wildlife trafficking has exploded putting iconic species such as elephants, rhinos, and tigers at renewed risk of extinction, while imperiling thousands of lesser-known species, from turtles to slow lorises to pangolins. For many species the toll is impossible to estimate, but some numbers are available: last year poachers killed over rhinos in South Africa alone, while the U.S. State Department says that an estimated 35,000 elephants were slaughtered for their tusks in 2012. Worth an estimated $19 billion in illicit funds, wildlife trafficking has become the fourth largest criminal activity after drugs, counterfeiting, and human trafficking. 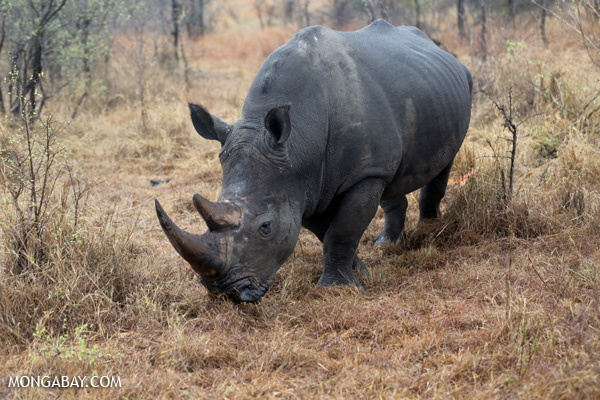 “Like other forms of illicit trade, wildlife trafficking undermines security across nations. Well-armed, well-equipped, and well-organized networks of criminals and corrupt officials exploit porous borders and weak institutions to profit from trading in poached wildlife,” Obama said in a statement.

Moreover, concerns are rising that funds garnered from slaughtering wildlife are helping to fuel terrorist groups and rogue militias across Africa. Experts also say that many of those involved in the trade are also connected other criminal activities such as corruption, drugs, human-trafficking, illegal logging, and weapons dealing.

The Obama administration’s new strategy will seek to raise the profile of wildlife trafficking among various federal agencies, cooperate with foreign governments and groups to bring down wildlife kingpins, and make the trade unprofitable and risky for criminals.

“We will seize the financial gains of wildlife traffickers in prosecutions, using all appropriate tools: fines and penalties, both criminal and civil, forfeiture of assets and instrumentalities, and restitution for those victimized by wildlife crimes,” reads the National Strategy For Combating Wildlife Trafficking. “Where possible, we will ensure that funds generated through prosecutions are directed back to conservation efforts or to combating wildlife trafficking.”

The strategy will also close most loopholes for ivory sales in the U.S. While ostensibly illegal, commercial ivory has been allowed to be sold domestically in the U.S. through a series of loopholes in the laws. The new rules will only allow the import, export, and sales between states of antique ivory. Sales within the same states must come from ivory imported pre-1990 for African elephants and pre-1975 for Asian.

The new strategy also proposes to decrease demand for wildlife products via public relations campaigns and working with the various sectors where the trade is most common.

“We must team more effectively with the transportation industry, the tourism sector, restaurant and hotel associations, those in the exotic pet industry, companies operating internet marketplaces, and other private sector entities in this effort,” reads the strategy. 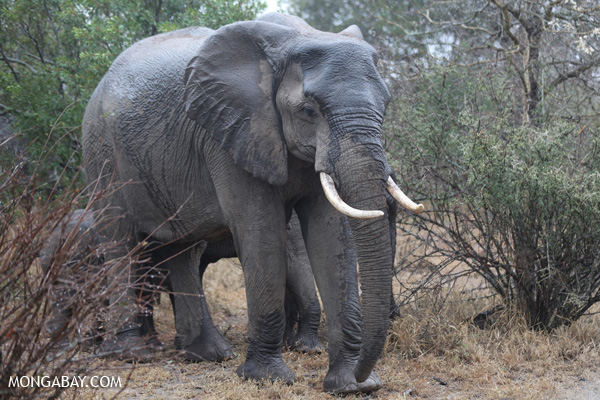 African elephant in South Africa. Photo by: Rhett A. Butler.

“The United States must curtail its own role in the illegal trade in wildlife and must lead in addressing this issue on the global stage,” the strategy concludes.

Conservation groups were enthusiastic about the new strategy.

“President Obama has elevated illegal wildlife trafficking to a priority issue for more than a dozen federal agencies, reflecting the fact that it has grown into one of the most profitable criminal industries in the world,” WWF President and CEO Carter Roberts said in a statement.

The head of the Wildlife Conservation Society (WCS), Cristián Samper, echoed this sentiment.

“I am encouraged to see a unified, cross-cutting plan, including an emphasis on site-based conservation action, which will better equip the United States to take on all facets of this crisis—stopping the killing, stopping the trafficking, and stopping the demand.”

Both Roberts and Samper also serve as members of the U.S. Advisory Council to the Presidential Task Force on Wildlife Trafficking.

The U.S. governments announcement coincides with a two-day conference beginning today in London on wildlife trafficking, attended by a number of world leaders and conservation experts.

(01/17/2014) In another sign that Africa’s poaching crisis has gotten completely out of control, South Africa lost 1,004 rhinos to poachers last year. According to the numbers released today by the South African Department of Environmental Affairs, 2013 was the worst year yet for rhino poaching in the country with more than 3 rhinos killed every day.

(01/03/2014) The Chinese government plans to destroy a stockpile of contraband elephant ivory and other seized wildlife products next week during a public ceremony in Guangzhou, reports the Wildlife Conservation Society (WCS).

(11/10/2013) Authorities in Costa Rica have identified a new method used by fishermen to circumvent a ban on killing sharks for their fins. According to an INTERPOL alert, fishermen are now leaving a band of skin to keep the fin attached to the spine when they kill sharks. This approach takes advantage of an apparent loophole in regulations governing the shark fin trade.