The Peruvian government has approved plans for gas company Pluspetrol to move deeper into a supposedly protected reserve for indigenous peoples and the buffer zone of the Manu National Park in the Amazon rainforest.

The approval follows the government rescinding a highly critical report on the potential impacts of the operations by the Culture Ministry (MINCU), the resignation of the Culture Minister and other Ministry personnel, and repeated criticism from Peruvian and international civil society.

A subsequent report by MINCU requested that Pluspetrol abandon plans to conduct seismic tests in one small part of the reserve because of the “possible presence of [indigenous] people in isolation,” but didn’t object to tests across a much wider area.
In addition to the seismic tests, the planned operations include building a 10.5km flow-line and drilling 18 exploratory wells at six locations—all of them in the reserve which lies immediately to the west of the Manu National Park and acts as part of its buffer zone (see map below).

The government approved the plans on January 27th when the Energy Ministry issued a resolution on the operation’s Environmental Impact Assessment (EIA), written by Pluspetrol together with consultancy Environmental Resources Management. 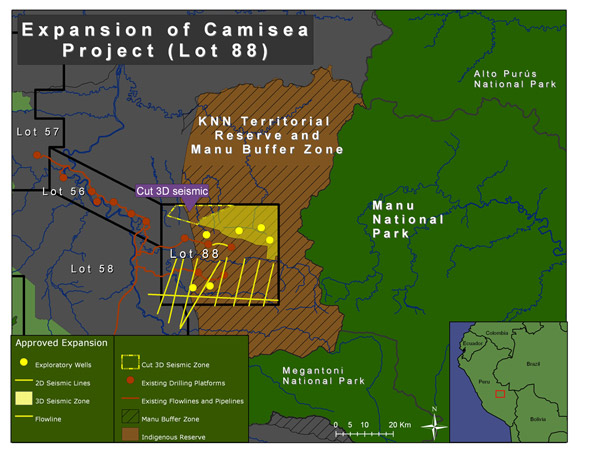 The decision was swiftly condemned by AIDESEP. The national indigenous organization accused the government and the Inter-American Development Bank (IDB), which has played a key role in gas operations in that region to date, of violating their commitments.

AIDESEP writes that “many ‘isolated’ indigenous people have already died in the name of supposed ‘progress.’ Enough. If one more brother dies, or is taken ill, or there is conflict, we will hold the state, the gas companies, the IDB and those who irresponsibly promote these policies responsible.”

The Energy Ministry could only approve Pluspetrol’s EIA following favorable opinions from other state institutions such as MINCU, the National Water Authority and, because the buffer zone of a national park is involved, the National Service for Protected Natural Areas (SERNANP).

But MINCU’s initial report, dated July 2013, effectively made it impossible for the operations to go ahead, stating that the impacts on the health of the reserve’s inhabitants could be severe, and warning that the Nahua could be “devastated” and the Kirineri and the Nanti made “extinct.”

Opposition to the operations has included appeals to the UN’s Committee on the Elimination of Racial Discrimination (CERD), the UN’s Special Rapporteur on the Rights of Indigenous Peoples, and the Inter-American Commission on Human Rights.

CERD responded by urging Peru to “immediately suspend” the operations. At the end of a visit in December, the UN Rapporteur recommended that the Peruvian government do an “exhaustive study” and that it shouldn’t proceed unless it ensured indigenous peoples’ rights won’t be violated.

The planned operations constitute an expansion of what is known as the Camisea gas project, Peru’s biggest energy development. There are already several well platforms in the indigenous reserve, which have been producing gas for years.

Almost three-quarters of Pluspetrol’s concession overlaps the reserve—officially called the Kugapakori-Nahua-Nanti and Others’ Territorial Reserve—which was created in 1990 and given greater legal protection in 2003.

The reserve’s inhabitants live in what Peruvian law calls “voluntary isolation” or “initial contact,” having sporadic, little or no contact with outsiders and therefore lacking immunological defenses.

Pluspetrol admitted in its EIA that contact with the reserve’s inhabitants is “probable” during the course of its operations, and that such peoples in general are vulnerable to “massive deaths” from transmitted diseases. 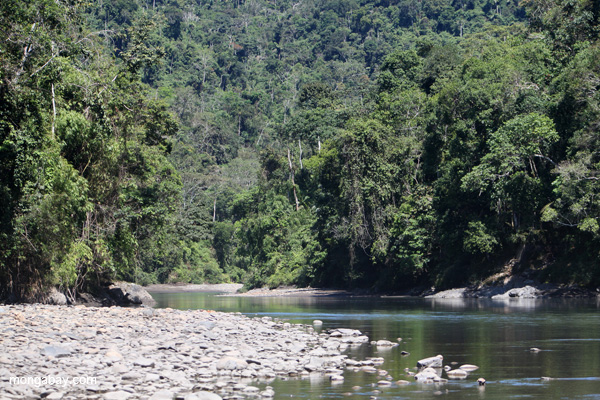 River in Manu National Park. Photo by: Rhett A. Butler.