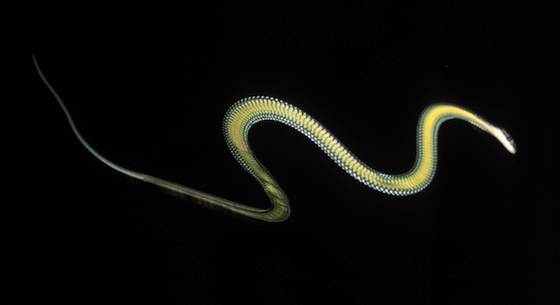 Flying snakes achieve surprising amounts of lift through the shape of their bodies, report researchers from Virginia Tech in a paper recently published in the Journal of Experimental Biology. The study examined how paradise tree snakes—one of five species of so-called flying snake found in Southeast Asia—shape their bodies to achieve the lift that allows them to glide up to 30 meters between trees.

During flight, the authors write, the snake flexes its ribs and, “morphs its circular cross-section into a triangular shape by splaying its ribs and flattening its body.” The resultant cross-section resembles a wide triangle with its upper vertex rounded and lower edge slightly concave.

The researchers determined the shape by examining images of snakes in flight, and used a 3D printer to create a model cross-section of the body. They then studied the lift and drag of the snake at various angles of attack by recording the movement of microscopic reflective beads suspended in water as they flowed around the model.

The authors were surprised to discover that the body of the paradise tree snake in flight out-performs airfoils and other similarly shaped objects tested under the same conditions. When tilted to a 35 degree angle, the snake achieved an usually high and unexpected spike in lift, while at 0 degrees, the shape provides negative lift and pulls the snake down.

Previous studies have shown that a snake in flight will, “orient its whole body roughly at an average angle of 25 degrees,” the authors write, however, “the actual variation in angle of attack along the snake’s body is unknown.” The researchers suspect that the snake may orient different parts of its body at different angles to precisely control the trajectory of its flight.

How flying snakes achieve lift has long intrigued scientists and engineers alike, and the study was partially funded by a grant from DARPA (Defense Advanced Research Projects Agency) an agency of the US Department of Defense.