Borneo monkeys lose a tenth of their habitat in a decade Four species of langurs monkeys that are endemic to Borneo lost more than a tenth of their habitat in just ten years, finds a study published in the journal Biodiversity and Conservation.

The study, conducted by David A. Ehlers Smith of Oxford Brookes University and the Orangutan Tropical Peatland Project at Universitas Palangka Raya, used distribution data for the Sarawak langur (Presbytis chrysomelas), the white-fronted langur (Presbytis frontata), Hose’s langur (Presbytis hosei) and the red langur (Presbytis rubicunda) and combined it with information on the forests types they are known to inhabit. Smith then assessed habitat loss using spatial data.

He found that the species lost an average of 13 percent of their habitat between 2000 and 2010. Palm oil, industrial timber plantations, and logging concessions were the biggest dangers for the monkeys.

“12.5 percent of all habitats were allocated for conversion to oil palm and industrial tree plantations, while logging concessions accounted for a mean 26.3 percent across distributions,” wrote the researcher. “While the current protected area networks encompassed an average 33.4 percent of distributions, most PAs are underfunded, degraded and threatened by logging and mining operations.”

Given the threats, Smith recommends zoning unallocated forest areas for new reserves within the distribution of Presbytis chrysomelas and Presbytis hosei sabana, the langurs that have lost the most habitat in recent years. He also urged greater study of the impact of logging operations on the monkeys. 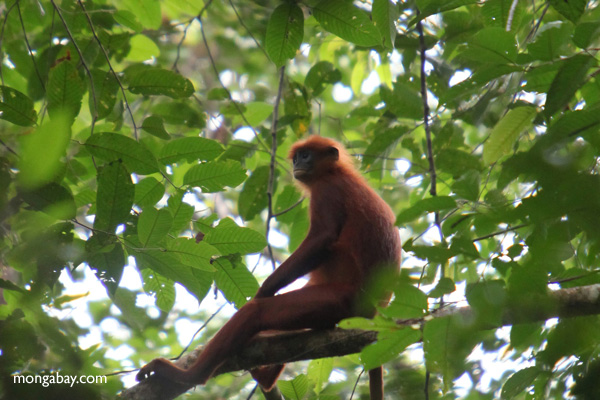 “Even well-managed logging may be harmful since it often targets the tallest trees, which are vital to the monkeys’ ecology,” he said in a statement. “More research is needed to determine if these monkeys are negatively affected by well-managed logging concessions, which can be just as effective as protected areas at maintaining forest cover.”

“To secure their future, the most endangered species need help first and new protected areas, that are well managed and away from areas of forest designated for economic activity, are needed.”

CITATION: David A. Ehlers Smith. The effects of land-use policies on the conservation of Borneo’s endemic Presbytis monkeys. Biodiversity and Conservation. February 2014.