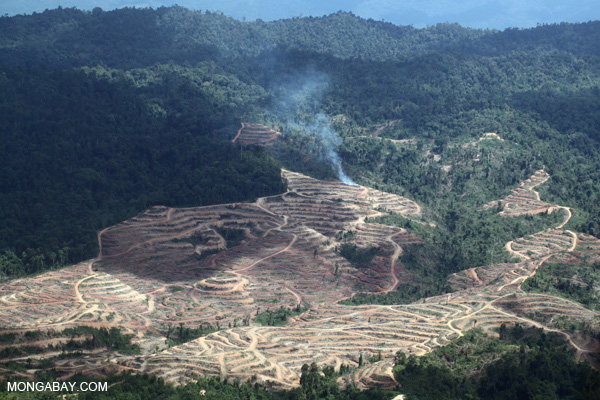 Fire burning on an oil palm plantation in Borneo. Photo by Rhett A. Butler.

Storebrand, one of Norway’s largest life insurance and pension savings companies, has sold off holdings in eleven palm oil companies due to environmental concerns.

In a statement issued last week, Storebrand said it divested after it found the companies had breached its sustainability standards.

“Climate change is the most comprehensive risk to sustainability, and the protection of forests, especially rainforests, is essential in order to negate the effects of climate change,” Christine Meisingset, Storebrand’s head of sustainable investments, said in a statement.

“The main driver behind deforestation in tropical regions is often the establishment of new palm oil plantations. Storebrand would rather invest more in companies that are pushing the industry toward a more sustainable approach.”

is maintaining holdings in only one palm oil company: Singapore-based Golden Agri-Resources (GAR), a palm oil giant that in 2011 established a comprehensive zero deforestation policy after a damaging campaign by Greenpeace. The policy prohibits GAR from converting high conservation value areas and high carbon stock forests, including rainforests and peatlands. It also commits the company to engage with local communities in a to acquire free, prior informed consent before developing new plantations.

The divestiture is not the first for Storebrand. Last year it stopped investing in coal miners and oil sands companies. Prior to that, the insurer blacklisted firms that make land mines and tobacco products.

Palm oil is used in a wide range of processed foods and cosmetics. The crop’s high productivity means it is an extremely profitable business relative to other types of land use in the tropics. But expansion in recent years has taken an increasing toll on wildlife-rich forests and carbon-dense peatlands, especially in Indonesia and Malaysia.