Resting near the bottom of the food chain, Antarctic krill (Euphausia superba) underpin much of the Southern Ocean’s ecosystem. But in a rapidly warming world, these hugely-abundant crustaceans could see their habitat shrink considerably. In a recent paper in PLOS ONE, scientists predict that Antarctic krill could lose 20 percent of their growth habitat, or 1.2 million square kilometers.

“Antarctic krill are an important food species for many animals including year-round Southern Ocean residents such as mackerel icefish and long-range travelers such as humpback whales,” lead author Simeon Hill with the British Antarctic Survey explained to mongabay.com. Some predators are highly dependent on krill directly, for example Antarctic krill make up 85 percent of Antarctic fur seals (Arctocephalus gazella) and 76 percent of grey headed albatrosses (Thalassarche chrysostoma) diet during breeding seasons.

Hill and colleagues conducted statistical modeling of Antarctic krill populations in the Weddell Sea, Scotia Sea and Southern Drake Passage. Looking at previous data on krill catches—including growth, sea surface temperature, and phytoplankton (which the krill feast on)—the researchers found that the krill’s growth habitat could contract by one-fifth. According to Hill, this is the size of France and Spain combined. However the results are even more grim for some krill-dependent predators. 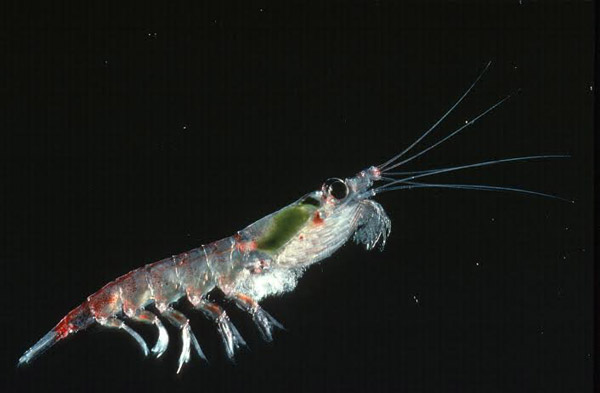 “The reduction in growth habitat within the range of predators, such as Antarctic fur seals, that forage from breeding sites on South Georgia could be up to 55 percent, and the habitat’s ability to support Antarctic krill biomass production within this range could be reduced by up to 68 percent,” the paper’s authors write, noting that such reductions are especially likely to hurt predators around South Georgia.

Dependent on cold water and low acidity, krill are likely to be impacted not only by warming but also ocean acidification. Antarctic krill also feed on the undersides of sea ice. Hill says these changes may end in conflict with far-flung industrial fisheries.

“Reduced food supplies in the Southern Ocean could lead to species such as Antarctic fur seals and macaroni penguins to spend more time foraging in the Atlantic, Pacific and Indian oceans where there is more competition from fisheries.”

Antarctic krill are also the target of a burgeoning fishery in the Southern Ocean, which could be imperiled by depleted populations.

“A recommendation that the Commission for the Conservation of Antarctic Marine Living Resources, which is responsible for managing the Antarctic krill fishery, should increase consideration of climate change impacts in its management decisions was made in 1992 but it was not until 2009 that the Commission resolved to do so,” the scientists write. “We suggest that there is a need for
more rapid progress in developing methods for evaluating climate change impacts in parallel with improved regional climate
projections.”

Parts of Southern Ocean have already warmed by 1 degree Celsius (1.8 degrees Fahrenheit). By the end of this century, the scientists expect the region to warm another 0.27 to 1.08 degrees Celsius.