by Nicholas Barrett on 7 January 2014

A “systematic and comprehensive” approach is needed to understand the impact of human behavior on the world’s public health, according to a new report. Written by the Heal (Health & Ecosystems Analysis of Linkages) consortium, the study highlights multiple examples of the impact on human health from environmental degradation, including sickness, death and even childhood reductions in IQ.

For example, the report cited that smoke from fires used to clear rainforests in Indonesia has been linked to a rise in cardiopulmonary disease in Singapore. Other examples include the destruction of coastal barrier systems like coral reefs and wetlands, which currently protect around one third of humanity (those living within 100km of the ocean) from rising sea levels. Meanwhile, as biodiversity and natural habitats decline, local access to wild meat falls as well. Lack of protein increases the chances of iron deficiency anemia, a condition that can hinder the learning potential of children as well as their physical ability. 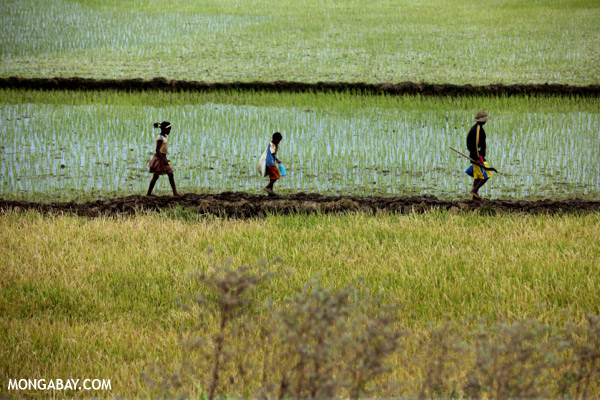 Malagasy villagers walking in a rice field. Photo by Rhett A. Butler / mongabay.com

Co-author of the report Samuel Myers told mongabay.com that “more then anything else the point of this papers is that most of these relationships remain poorly characterised and we worry as much about the surprises, like food’s nutritional value falling with rising C02, as the relationships that we already understand. ”

The report also examines the demographics most likely to be affected. Myers, with the Harvard University of Public Health, explained what he describes as an “environmental justice dimension.”

“The impacts of both climate change and other types of environmental change are likely to be experienced disproportionally by the poor and by future generations whereas many of the benefits associated with these changes accrue to the wealthier and to current populations,” he notes. 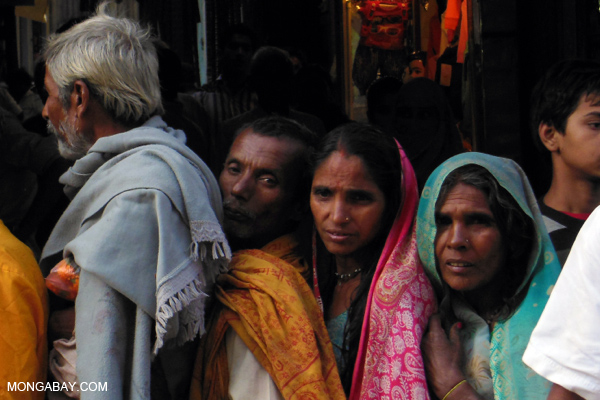 Pilgrims waiting to enter a temple in India. Photo by Nancy Butler / mongabay.com

Another aim of the report is to encourage a system in which lawmakers have access to better information to pass meaningful legislation. Citing examples like the Clean Air and Clean Water Act, (two US laws aimed at improving public health). Myers hopes to provide data that could help politicians understand the consequences of ecological damage, as well as empowering those working for a healthier environment.

“As these relationships are better understood and quantified, it will be possible for policy makers to anticipate the public health implications of the decisions they are making,” he says.

The quicksilver demon: rogue gold-mining is the world’s largest source of mercury pollution

(11/20/2013) In 1956, in the quiet seaside town of Minamata on the southwestern coast of Japan’s Kyushu Island, cats began to behave very strangely. They convulsed, displayed excessive salivation, and gradually lost the ability to walk. Then, dead birds began to fall out of the sky. Shellfish opened and decomposed. Fish also displayed abnormal behaviors, eventually floating up to the surface of the Shiranui Sea. Many of the ailing cats wandered into the sea and drowned. Soon, there were no more cats alive in the area.

(10/21/2013) It’s unlikely conservation organizations can survive if they are unwilling to embrace change: as an endeavor, conservation requires not just longterm planning, but also an ability to move proactively and fluidly to protect species and safeguard ecosystems. Environmental and education NGO, the Art of Conservation, is currently embarking on its biggest change since its foundation in 2006: moving away from its base in Rwanda, while leaving a legacy behind.

(10/03/2013) Climate change may increase the incidence of diarrheal disease in Botswana, according to a recent study in the International Journal of Environmental Research and Public Health. “Diarrheal disease is a very important public health problem in Botswana,” said lead author Kathleen Alexander, who led a unique 30-year analysis (1974-2003) on the incidence of diarrhea in Botswana. “As a water-restricted country, Botswana is predicted to be heavily impacted by climate change.

(08/12/2013) Last week U.S. scientists with the biotech company, Sanaria, announced a possible breakthrough on an experimental malaria vaccine: an early trial led to a success rate of 80 percent for the two highest doses. Malaria remains one of the world’s worst scourges. In 2010, the World Health Organization reported 219 million documented cases of malaria (millions more likely went undocumented) and estimated that between 660,000 and 1.2 million died of the disease, mostly children in Africa, that year alone. Mortality is not the only impact of the disease, however: experts have long noted circular links between malaria, poverty, and stalled development.