Twenty percent of China’s air pollution can be attributed to goods exported to America, with some of those emissions drifting back to the Western United States, finds a study published this week in the journal Proceedings of the National Academy of Sciences.

The research, conducted by an international team of researchers, estimates that Los Angeles sees at least one extra day of severe air pollution due to nitrogen oxides and carbon monoxide emitted by Chinese factories making products for export. On some days as much as a quarter of sulfate pollution on the California coastline can be attributed to Chinese export production.

“We’ve outsourced our manufacturing and much of our pollution, but some of it is blowing back across the Pacific to haunt us,” said University of California at Irvine scientist Steve Davis, one of the study’s co-authors, in a statement. “Given the complaints about how Chinese pollution is corrupting other countries’ air, this paper shows that there may be plenty of blame to go around.”

“When you buy a product at Wal-Mart, it has to be manufactured somewhere. The product doesn’t contain the pollution, but creating it caused the pollution.”

The findings suggest that outsourcing emissions to China isn’t ultimately an effective means to reduce pollution. The researchers therefore argue for greater international cooperation in reducing “transboundary” air pollution and addressing who is responsible for emissions from production and consumption.

They note that bringing Chinese air quality regulations up to U.S. standards and implementing energy efficiency programs could cut China’s emissions up to 60 percent. 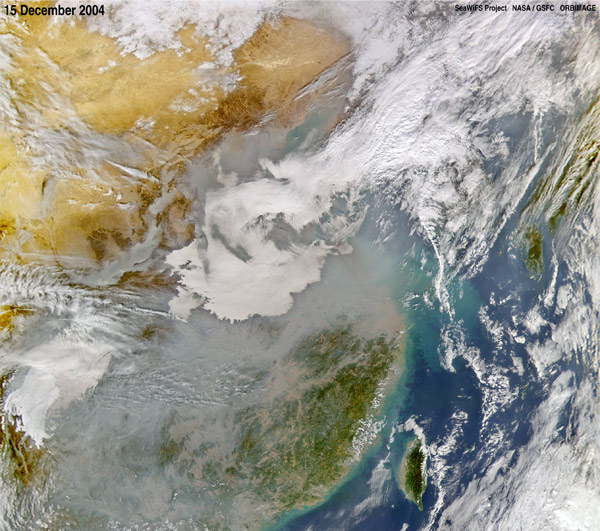 Cool winter weather probably contributed to the build-up of haze over Eastern China on December 15, 2004. Much of China relies on burning coal for winter heating and energy, and that produces the black aerosols that form the haze seen here. NASA image courtesy the SeaWiFS Project, NASA/Goddard Space Flight Center, and ORBIMAGE. Caption courtesy of NASA Earth Observatory.