APRIL partner accused of clearing forests and felling endangered tropical hardwoods. Indonesian NGO says the wood supplier is linked to corruption and its legal timber certificate should be revoked 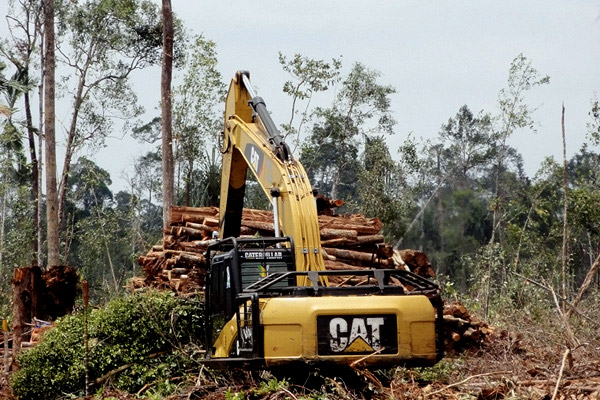 Logging operations at PT Triomas FDI’s concession in Riau. Photo taken by Eyes on the Forest on 21 September 2013.

An Indonesian wood supplier that was recently certified under the country’s legal timber verification scheme has been clearing natural forests – including stands of endangered ramin trees – and draining peat swamps on its concession, alleges a local environmental watchdog.

The company, the group says, is also implicated in corruption linked to its concession permit. The organization is calling for the company’s legal timber certification to be revoked and urging auditors not to issue legality certificates to companies involved in corruption.

According to an investigation by the Forest Rescue Network Riau (Jikalahari), PT Triomas FDI cleared a total of 2,500 hectares of natural forest between May and October last year. The company, which operates an industrial forest plantation of eucalyptus and acacia trees in Sumatra’s Riau province, is a wood supplier for the pulp and paper giant Asia Pacific Resources International Limited (APRIL).

Investigators also found evidence that stands of rare ramin trees (Gonystylus spp.) had been cleared. The International Union for Conservation of Nature (IUCN) and the Convention on International Trade in Endangered Species (CITES) classify 15 species of ramin as endangered, and cutting down or selling the endangered hardwood is illegal under Indonesian law.

PT Triomas, which was certified in March last year under Indonesia’s timber legality certification system (SVLK), has also been implicated in corruption along with various local government officials, Jikalahari said.

Without the permit to exploit the natural forests, over 97 percent of the company’s 9,950-hectare plantation concession would have been unusable, as it would have been illegal for PT Triomas to clear the forested land.

Azmun and several other local government officials in Riau were eventually convicted of corruption, and a judge ruled that the state incurred a total of Rp 26 billion in losses linked to the PT Triomas concession.

This certification will remain valid until March 2016, and will eventually mean that all wood produced by the company will be considered legal not only in Indonesia, but also for export to the European Union.

The European Union currently requires all companies importing wood products to EU countries to prove that the products were produced legally. In September, Indonesia signed an agreement with the EU pledging to end all trade in illegal timber. Once this agreement is fully implemented, EU companies will be able to import SVLK-certified products without conducting further due diligence.

“Why did PT Equality not notice that PT Triomas FDI’s permit had been proven to be linked to corruption?” Muslim Rasyid, the Jikalahari coordinator, told Mongabay-Indonesia. “We ask that the certification be revoked.”