A study on deforestation in Cambodia has found that forests are better protected when local communities are given the responsibility to manage them locally.

Cambodia has one of the highest rates of deforestation in the world, losing 1.2 per cent each year from 2005-2010. The loss of forests due to illegal logging, commercial agriculture, and other factors can have a devastating impact on local communities, as well as contributing to global climate change. In a country beset by corruption and ineffectual state forest management, alternative models of forest protection are clearly needed.

Research by the Universities of Exeter and Oxford looked at how effective community forestry is in reducing deforestation and supporting livelihoods in the Prey Long forest area of Cambodia. Prey Long forest is one of the last lowland evergreen forests of mainland Southeast Asia. Banteng – wild Cambodian cattle – roam the grassy clearings, and pangolin hide in the shadows. Prey Long is home to an endemic forest type – deciduous swamp forest – and to many rare tree species including krunueng, targeted by loggers for it’s high value on the illegal timber market.

One of Cambodia’s foremost environmental activists, Chut Wutty, was a keen proponent of community forest patrols and law enforcement. Chut Wutty spearheaded the Prey Long Network an activist group that aims to protect the whole of Prey Long forest. Tragically in 2012, Wutty was killed by armed guards at an illegal logging site he was investigating in the Cardamom mountains. People living in Prey Long continue to actively defend the forest – both through officially recognized community forestry and through the work of the Prey Long Network. 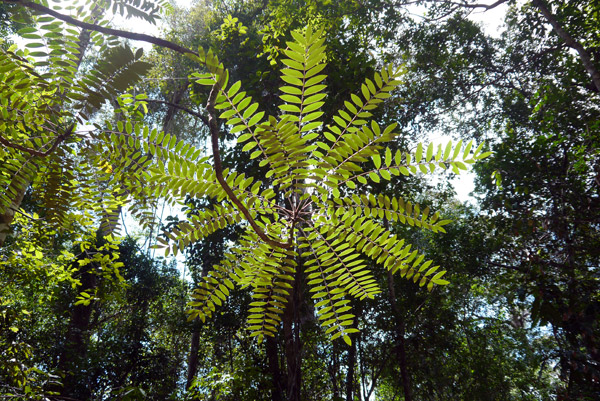 Community forestry aims to reduce illegal logging and deforestation by creating local village institutions. Local people patrol the forest looking for loggers or signs of damage. They benefit from the right to use forest products and increased tenure security over forest resources. This paradigm of forest management has developed since the early 1980’s as part of a wider movement toward participatory development. Elinor Ostrom, the late scholar of community forestry, received the Nobel Prize for Economics for her work on community resource management.

Community forestry has been established for over ten years in Cambodia, yet to date there has been no research into its effect on forest condition. The study, led by myself and funded by the ADM Capital Foundation, assessed the effectiveness of community forestry by comparing nine locally managed sites with paired controls in state production forests. The findings are published in the latest issue of Conservation Biology.

We discovered that sites maintained by locals had fewer signs of man-made damage such as cut stems, stumps and burned trees. There were also more regenerating stems, a higher aboveground biomass and reduced canopy openness. The research also showed community forestry was most effective where the community relied on forest products to support themselves. 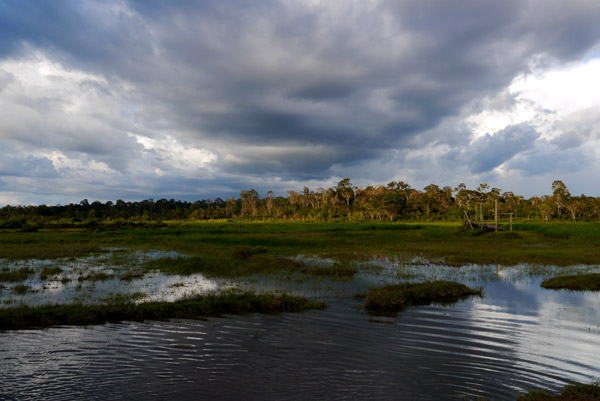 Study co-author Dan Bebber of the University of Exeter, has spent much of his career studying the dynamics of tropical forests. He said, “There is a long history of community forestry in South Asia, but relatively few studies that directly compare the ecological consequences of community-managed forests to its alternatives. We found that the capacity of locals to manage the forest are significant and of interest to national and international policy makers because of the potential contribution to reducing carbon emissions from deforestation and degradation.”

“In Cambodia, Community forestry means that local people are able to decide how they manage and use their forest, although the government maintains considerable control. Giving local people more say in managing their forests helps reduce deforestation, even in Cambodia with its high overall deforestation rate.”

The Prey Long landscape covers 520,000 hectares of lowland evergreen forest and is home to 80% of Cambodia’s economically valuable and endangered endemic tree species. Approximately 250,000 people live in 340 villages in the area and are heavily reliant on forest products as a source of income. Resin trees are particularly important. These are species of Dipterocarp that produce natural resins collected by local people and sold for use in industry.

This landscape is threatened by expanding rubber plantations, which the Prey Long Network maintains have been responsible for the illegal logging of resin trees. Chut Wutty was assiduous in teaching the local people their rights and the provisions of the forest law. In a forthcoming documentary charting his work, Wutty explained, “In some places people rise up by themselves to protect their natural resources. They work together and respect the law. I believe if donors support the people’s goals success can be achieved.”

Ways of life in Prey Long are transforming as wage labour is increasingly common and long-standing traditions of natural resource use are eroded through deforestation. The communities’ main hope for the future is through law enforcement. The local people in the area have a growing tradition of community forest management, and there is now clear evidence that it is effective.